Brexit Will Heighten Division Within the European Union 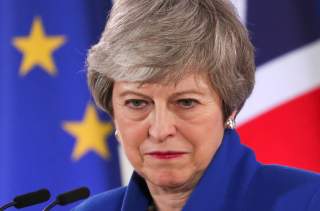 The chaos surrounding Britain’s still unclear departure from the European Union has created the perception of an incompetent, divided, and humiliated British government. In contrast, the EU comes out looking cool, steady, and completely in control. But while Britain may appear humiliated, this apparent triumph is an illusion that masks the challenges that the EU will face after Brexit.

Britain has always been a somewhat reluctant participant in European integration, but its clout has ensured that broader European integration has proceeded at a relatively slow and moderate pace. Without Britain, this check on integration disappears. This is likely to accelerate integration and the exacerbate the cleavages between those who see ever closer union as a project with a clear federal endpoint, and those for who instead envision a “Europe of nations.” Post-Brexit, the difference between these two visions will become starker, and Europe will eventually have to decide whether it will be ever—or never—closer union.

The fundamental logic of integration, explicitly laid out in the preamble to the 1 Treaty of Rome, has always been to build “an ever closer union among the peoples of Europe.” Europe has undeniably made enormous strides towards such a union. When Britain joined the European Economic Community in 1973, it was essentially a free trade bloc. Today, free trade is just one of the many components of an integrated Europe, and the EU now has virtually all the institutions one would expect of a state.

As one of the big three players in the EU, Britain has had a substantial role in shaping the direction of European policy since 1973. Take for example the Single European Act that established the common market. While often remembered as an arch-eurosceptic, Margaret Thatcher’s government was, in fact, vital to the conception and the creation of the common market.

The 1970s and early 1980s was a time of stagnation in integration, often referred to as “Eurosclerosis.” The Single European Act helped bring about an end to this stagnation by revitalizing integration on the basis of the creation of the common market. The Act was based upon a white paper produced by the Delors Commission and British vice-commissioner Lord Francis Arthur Cockfield.

Thatcher had sent Cockfield, a member of her cabinet, to Brussels to work with Delors to help create this white paper. Cockfield played a crucial role in the production of this paper and is widely credited as a major architect and contributor to its success. Cockfield’s thoroughness produced a paper that was quickly supported by the European Council and became the Single European Act and the common market. The British played an instrumental role in the creation of the common market, the most successful part of the European project to date, and arguably helped revitalize the integration project in the process.

But British commitment to the project has always been ambivalent, and London has ultimately pursued a “transactional” relationship. Ironically, this skepticism has helped stabilize integration by slowing it down and ensured it had to take a piecemeal approach. Britain opted out of the Euro and the Schengen agreement, which has helped ensure there was a strong voice outside of these agreements within the EU.

Britain has also helped limit the extension of qualified majority voting into areas such as taxes, foreign policy and defense. While some policy areas require unanimity among European Council members, others do not, and in some areas, qualified majority voting is used, meaning instead of unanimity, proposals only need the approval of 55 percent of countries representing 65 percent of the EU’s total population. For many years, the British were strong advocates of EU enlargement, under the belief that wider membership would reorient integration towards a “Europe of nations.”

This piecemeal approach necessitated by British policy towards Europe is something arch-federalists have frequently complained about. But this has arguably been the key to the success of integration. One of the EU’s founding fathers, Jean Monnet, understood that integration was very much an elite-driven, top-down process and that a united Europe would have to be forged piece by piece, systematically and quietly.

Few Europeans want a United States of Europe, and if the integration had not been such a gradual process over the last half-century, it is unlikely it would have survived. Britain’s skepticism has paradoxically been a key ingredient in the success of the project to date.

But does this change after Britain leaves? Already, French president Emmanuel Macron has called for a “European Renaissance” that includes deeper integration, and there is renewed discussion about a common European army and full fiscal union. Guy Verhofstadt, a member of the European Parliament and a well-known arch-federalist, frequently suggests that this renewed integration project will require a move away from things like the rule of unanimity in important areas like foreign policy.

After all, the EU’s survival may well depend on deeper integration. The Eurozone has still not fully recovered from the financial crisis, and a future recession looms large. Many economists think that the long term survival of the Euro depends on full monetary, banking, and fiscal integration of the Eurozone economies. But this would mean surrendering fiscal sovereignty, something many governments are justifiably wary of.

As Macron explicitly stated in a recent op-ed “Europe is not just an economic market. It is a project.” In Brexit Macron and others sees an opportunity to push forward with this project, and recognizes the necessity of doing so if Europe is to survive. But they seem not to recognize that this process will further inflame nationalism and Euroscepticism across member states. The Brexit debacle has dampened the possibility of further exits, but that does not mean that there is now a broad consensus for integration. Figures like Italian deputy prime minister Matteo Salvini and Hungarian prime minister Viktor Orbán are happy to remain in the EU while openly chastising it and using Brussels as a villainous foil. As integration deepens, we are likely to see more and more of this.

The logic that drives “ever closer union” seems to point inevitably towards some sort of European superstate. But this is a dream that resides largely in Brussels. Full union is not a common project, and integration by stealth can only go so far. While members and citizens generally like the benefits of membership, this cannot be misread as a desire for a truly federal Europe.

The Eurobarometer is the public polling arm of the European Commission and is often cited by advocates to show how Europeans increasingly support a federal project. But the Eurobarometer is notoriously misleading, and studies have shown how it “selects and frames questions in ways that systematically produce ‘integrationist’ outcomes.” A better barometer is the real explosion of nationalism across the continent, and upcoming European parliamentary elections in May will likely confirm this.

European parliamentary elections have in the past seen plenty of protest voting, but the 2019 elections are poised to take this to a whole new level. Since its inception, a majority of the seats in the parliament have been held by pro-European center right and center left groupings. If polls are to be believed, this will end in 2019.

Politico’s poll tracker currently has the EPP/S&D groupings winning around 314 seats, roughly 40 seats short of a majority. Italy's Lega Nord, Poland’s Law and Justice, Marine Le Pen's National Rally, and the AfD in Germany are all expected to make gains. Salvini has spearheaded the creation of a new eurosceptic bloc with parties from Denmark, Finland, and Germany. Furthermore, Salvini is still attempting to woo other major parties that could make it a major force in the coming years. Meanwhile, Orban’s Fidesz party was recently suspended from the EPP grouping, and Orban has suggested he may now fully break with the EPP and form a nationalist bloc with partners like Salvini. While these various nationalist and eurosceptic parties will not be sitting together in one grouping, they will probably be large enough to have the power to disrupt the workings of the legislative and procedural workings of the EU.

There is a tendency among many of those sympathetic to the integration project to blindly assume that integration is a unidirectional historical inevitability. But this is foolish. History is radically contingent, and ever closer union is not an inevitable outcome. When integration first began after the World War II, the purpose was clear: to ensure peace and prosperity across the continent to prevent another major war and to help ensure communism remained unappealing in Europe. But today its purpose is less clear, even as the process continues.

Without Britain, and with faster integration, Europeans will eventually have to decide what integration ultimately means. Integration by stealth will continue for now, but as more and more power is accumulated in Brussels, member states will have to start seriously asking what the hard limits of integration are. Brussels comes out of the Brexit debacle looking triumphant, but this may be short-lived. If Brexit does accelerate integration and “heighten the contradictions,” then the EU may soon face a reckoning. Europe will have to decide whether it wants ever, or never, closer union.