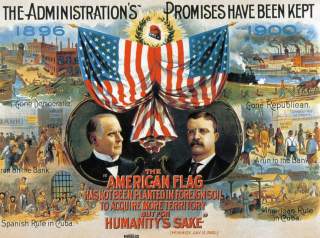 OF ALL American presidents, William McKinley suffers the most from the gap between his historical significance and his public reputation. The twenty-fifth president of the United States, he was elected in 1896 and assassinated by an anarchist, Leon Czolgosz, in 1901, six months into his second term in office. Few presidencies have been as consequential. In domestic politics, his election in 1896 and reelection in 1900 marked the decisive defeat of the Jeffersonian agrarian populism of William Jennings Bryan in favor of the Hamiltonian vision of an urban-industrial society organized on the basis of corporate capitalism. He inaugurated four decades of Republican domination of the federal government, a political realignment on the scale of those that followed the presidencies of Andrew Jackson and Franklin Delano Roosevelt. He led the United States in the Spanish-American War, gaining Cuba, Puerto Rico, Guam and the Philippines as American protectorates; obtained the annexation of Hawaii as a U.S. territory (which became a state in 1959); and laid the groundwork for the construction of the Panama Canal. The “Open Door” policy of his administration was followed in time by America’s commitment to defending China’s territorial integrity against Japan in World War II. A former arch-protectionist, as president he began the pivot away from infant-industry import substitution toward a strategy of reciprocal trade liberalization that was more appropriate for the United States, which had become the leading industrial economy in the world. McKinley, in short, presided over the transition from Lincoln’s America to the America of Theodore and Franklin Roosevelt and Woodrow Wilson.

Despite his historical importance, McKinley hardly exists in the popular consciousness of contemporary Americans. There have been attempts to revive McKinley’s reputation in recent years, by George W. Bush’s campaign advisor Karl Rove, who hoped that his boss, like McKinley, would inaugurate a long era of Republican dominance, and by Kevin Phillips, who admires McKinley as much as he despises the Bush dynasty. Now Robert W. Merry, a distinguished journalist and historian, and former editor of this magazine, provides a superb study of this neglected American statesman in President McKinley: Architect of the American Century.

Merry has written a traditional biography, not a polemic with its eye on the present like those of Rove and Phillips. Merry, the editor of the American Conservative and the author of numerous well-received books on American history, unites impressive archival research with astute judgments to offer a riveting portrait of McKinley. He covers a vast amount of territory, focusing on the link between McKinley’s rise and the formation of the modern Republican party. But Merry is also cognizant of the challenge that he faces—not least the bad luck that the quiet, self-effacing McKinley, a Civil War veteran known throughout his life as “the Major,” was succeeded in the White House by one of the most flamboyant characters in American history:

*** “Impetuous, voluble, amusing, grandiose, prone to marking his territory with political defiance, [Theodore] Roosevelt stirred the imagination of the American people as McKinley never had. To the Major’s solidity, safety, and caution, the Rough Rider offered a mind that moved ‘by flashes or whims or sudden impulses,’ as William Allen White described it. He took the American people on a political roller-coaster ride, and to many it was thrilling.” ***

THE DUTIFUL son of pious Protestant parents, McKinley grew up in Ohio, dropped out of college because of a mysterious illness, and became a schoolteacher. Volunteering for the U.S. Army in the Civil War, he served under Rutherford B. Hayes, later his predecessor as president of the United States. Following the war, he practiced law and went into Congress, where he became an expert defender of high tariffs. Popular anger at the McKinley Tariff of 1890 led to his defeat for reelection. But in alliance with Mark Hanna, an iron manufacturer and kingmaker in Midwestern politics, McKinley became governor of Ohio in 1891 and 1893.

His life was not without pain. His two daughters died in childhood, and the ill health and frail mind of his wife Ida was a challenge—one that he met with his customary kindness and patience. His reputation and career were briefly endangered when a loan to a friend that he had cosigned went bad. But remarkably few obstacles confronted this calm and deliberate individual as he ascended the cursus honorum of late-nineteenth-century American politics. If he ever raged at subordinates, went out on a bender with cronies, or flirted with a floozy, history has not recorded the event.

Indeed, McKinley’s career formed a résumé as free of blemish as that of a class president or valedictorian whose yearbook entry reads, “Destined to succeed; liked by all.” Merry is a first-rate scholar and an accomplished writer, but the entire animation team of Disney’s Pixar Studios would have trouble bringing William McKinley to life.

Because his life and personality were so lacking in drama, the case for McKinley must be made on the basis of his accomplishments. Here, the greatest challenge to McKinley’s reputation in the twenty-first century is the legacy of historians of the mid-twentieth century. William Jennings Bryan and the Democratic Party lost the election of 1896, but they won the battle of the books. The four-decade hegemony of the McKinley Republicans was followed, from the 1930s to the 1970s, by four decades of political dominance by Roosevelt Democrats. With a few exceptions, like Harvard historian Samuel Eliot Morison, most academic and popular historians in the middle of the twentieth century were slightly or significantly to the left of center and tended to be New Deal Democrats, when they were not Norman Thomas Socialists.

The Farmer-Labor base of the New Deal Democrats united two groups that had been on the outs during the McKinley-to-Hoover period: agrarian populists in the South and Midwest, and the disproportionately European-immigrant working class in the industrial cities of the Northeast and Great Lakes region. Sympathetic scholars wrote histories in which the Northeastern industrialists and Republican politicians whom Democrats had dislodged were the villains.

The economic nationalism of the McKinley era can be described as dual protectionism—tariff protection for selected American industries, and protection of the wages of American workers from competition by immigrants, both Asian and European, whose numbers were curtailed beginning in the 1880s by measures that were often justified by nativism and racism. This nationalist and protectionist political formula worked to ensure Republican dominance between the depressions of the 1890s and 1930s.

However, the agrarians in the Democratic Party had always been free traders, seeking foreign markets for American food, fiber and lumber, and denouncing tariffs as a tax on farmers to subsidize greedy industrialists. And the national-origins immigration-quota system instituted by the Republican-dominated Congress in the 1920s was rigged in favor of British and northwestern European immigrants. It also enshrined WASP disdain for Jews and immigrants from southern and eastern Europe (support for excluding nonwhite immigration was bipartisan in this era). Naturally enough, then, in the transvaluation of values that took place when the odd-bedfellows coalition of Southern and Midwestern agrarians and European white “ethnics” in the big cities overthrew the Republicans during the Great Depression, industrial protectionism and immigration restriction were demonized, and free trade and generous immigration policies came to be seen as symbols of virtue.

Populist views of banks and big business also shaped the culture of the New Deal Democrats. As it had been since the days of Jefferson and Jackson, the Democratic Party was still based largely in the agricultural and mining regions of the South, Midwest and West, in which most businesses were small and local farmers and merchants viewed themselves as colonial subjects of Northeastern industry and finance. The term “robber baron” came to be applied retrospectively to most of the major bankers and industrialists between the Civil War and the New Deal, including J. P. Morgan, Andrew Carnegie and John D. Rockefeller. The whimsical 1873 novel The Gilded Age, by Charles Dudley Warner and Mark Twain, which depicted the pervasive corruption of the Reconstruction era, lent its title to the entire period between the Civil War and the Progressive Era, whose beginning was dated not to the McKinley administration, but to that of his vice president and successor, Theodore Roosevelt. To this day, pundits and politicians refer casually to “the robber barons of the Gilded Age” as though these terms were not just crude and propagandistic smears.

IN FOREIGN policy, too, there was a transvaluation of values when the Roosevelt Democrats replaced the McKinley Republicans after 1932. As heirs to the Hamiltonian tradition, the McKinley Republicans, like their predecessors the Whigs and Federalists, favored a strong national government and a modern, professional military. They shared American republican values, but did not believe that preserving republican liberty at home was incompatible with a standing army and a world-class fleet.

But that is exactly what many Jeffersonians believed. For generations, Jeffersonians insisted that the modern nation-state and modern large-scale corporate capitalism in themselves were inimical to republican liberty, defined as a largely agrarian society dominated by economically independent yeoman farmers and small business owners. It was not enough for the United States to stay out of foreign wars, which could cause the militarization and regimentation of American society. The very instruments of a modern great-power state had to be shunned by Americans.