Bringing the Mighty SS United States Back to Life 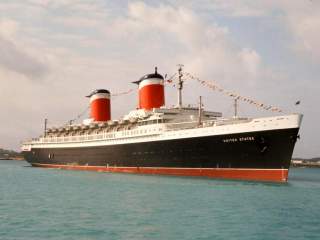 “You can’t set her on fire, you can’t sink her, and you can’t catch her.” - William Francis Gibbs

William Francis Gibbs was an engineer with the soul of an artist. By the time his masterpiece, the ocean liner SS United States, debuted in July 1952, Gibbs was heralded as America’s most successful naval architect. Tall, gaunt and sharp-tongued, Gibbs had a photographic memory and a single-minded passion for ship design. Yet he did not rise to the top of the naval architecture profession by traditional apprenticeship. Born to great wealth in 1886, Gibbs dropped out of Harvard after his somewhat shady speculator father lost his entire fortune. Neither of his parents, who aspired to proper Philadelphia status, encouraged their son’s passion to become a naval architect, pushing him instead towards the law. Gibbs was also lousy at math. It took the support of his devoted brother Frederic, an avid reading of engineering books in his spare time and a prominent mentor in the U.S. Navy to give him the knowhow (and confidence) to pursue his professional dream.

His real talents were artistic vision, ruthless project management (shipyard managers were said to lock their gates when they saw him coming) and above all, salesmanship. During peacetime, his firm of Gibbs & Cox designed everything from passenger liners to fireboats to garbage barges. During the Second World War, his firm was responsible for almost 70 percent of all naval tonnage produced by American shipyards. Gibbs created working plans for the mass-produced cargo vessel known as the “Liberty ship,” over 2,000 of which were built during the war.

TIME magazine hailed him as a “technological revolutionist,” but he credited his success to intense inner drive rather than to what other people thought of him. “I studied engineering at night out of books. That’s the way to really learn things—by yourself.”

Yet his real dream was to create the finest, fastest, most beautiful transatlantic liner in history. It took him 40 years of hard work, selling and more than a bit of skullduggery to get what he wanted. That ship would be the SS United States, the first American ship to hold the transatlantic speed record in nearly a century.

Like many self-made creative figures, Gibbs had a dark side. He drove himself hard, as well as those around him. His personal life suffered because of his maniacal focus on his work. His wife Vera Cravath Gibbs was devoted to him and supported his passion, but the two eventually grew apart. He had strained relations with his two sons. A longtime vestryman at St. Thomas Episcopal Church in New York, he would show up in the office on Sunday mornings sporting striped pants and morning coat. He knew that designing the finest passenger liner in the world was a task that required superhuman focus and attention to detail. Just before the majestic ship left for her record breaking maiden voyage across the Atlantic, he apologized to his staff “for complaining bitterly about their stupidity, because none of them is stupid—and for doing all those things that a taskmaster does in driving the Egyptians to build a pyramid.”

For him, the ocean liner SS United States would be his symphony in steel, what the Germans call Gesamtkunstwerk: a national synthesis of architecture, engineering and the decorative arts that told us who we were. The nation itself was at a crossroads in the early 1950s. Victorious in war, America boasted the largest industrial economy in the world. After two decades of privation from war and depression, Americans could now choose from a bewildering array of consumer products: cars, refrigerators and even pre-fab single-family suburban homes. Yet looming above all of this material prosperity was the specter of the Korean War, as well as the greater threat of nuclear Armageddon. The SS United States reflected this contradiction in the nation’s mood. She was built on a grand scale: as long as the Chrysler Building is tall. Able to carry 2,000 passengers in three classes, she was the first ocean liner to be air conditioned from stem to stern, and boasted lavish lounges, a swimming pool, two movie theaters, a kennel and, according to one United States Lines advertisement, the largest wine cellar afloat. In her seventeen years of service, she carried more than her fair share of celebrities: the Kennedys, Marilyn Monroe, Prince Ranier and Princess Grace of Monaco, and even the stylish yet controversial Duke and Duchess of Windsor. She also carried many business travelers, vacationing families, college students, and immigrants fleeing war-devastated Europe.

Yet Gibbs designed this beautiful ship first and foremost for war. She could be rapidly converted into a troopship able to carry an entire army division (14,000 soldiers) halfway around the world without refueling. Almost no wood (the pianos were notable exceptions) was used in her construction. Her engines and underwater hull designs were classified ‘Top Secret.’ Her top speed of 38.38 knots—four knots faster than her closest rival, England’s RMS Queen Mary—made her a near-impossible torpedo target. The United States military paid two-thirds of her $78 million dollar construction cost.

After her record-breaking maiden voyage, Gibbs never traveled on SS United States again, but greeted the ship every time she arrived in New York City. He died in 1967. Two years later, the SS United States was retired from service, done in by rising fuel costs and jet competition. The SS United States still holds the westbound transatlantic speed record—a once coveted prize known as the Blue Riband of the Atlantic—with a crossing time of 3 days, 12 hours, 12 minutes, and an average speed of 34.51 knots. Accomplished using only two-thirds of her engine power.

Remarkably, this great ocean liner, unlike almost all of the other ships of her type, has survived to this day, albeit stripped and rusting at a Philadelphia pier. This past Thursday, Crystal Cruises CEO Edie Rodriguez announced at a press conference that her company has entered a nine-month purchase option with the ship’s current owner, the nonprofit SS United States Conservancy (headed by Gibbs’s granddaughter Susan Gibbs), with the intention of returning the ship to seagoing service. Following extensive surveys and studies, the ship could hopefully return to service by 2018. When asked about the chances of this dream coming to pass, Rodriguez responded: “I believe it’s 100 percent.”

Along with celebrating the possibility of a new future at sea, there is also a feeling amongst those who have shared William Francis Gibbs’s passion for the Big Ship of letting her go. No longer a relic of a bygone era, she will be a modernized cruise vessel in the next few years: changed in many ways but still hopefully the same ship in spirit. In a project as complex and expensive as this one, I've learned over the past nine years that historic preservation is as much about pragmatism as it is about principle. After years of sweat equity by many people and a generous donation of $5.8 million from philanthropist Gerry Lenfest, a major cruise line is considering investing $750 million to bring the vessel back to sea. There has been plenty of drama, conflict and many close calls, but if successful this project will be a wonderful example of a small group of devoted people working together with philanthropists, artists and business leaders to bring an irreplaceable part of our history back to life. With hard work and a lot of luck, this could be the Grand Central Terminal of our time. Abused and almost lost, but now revitalized and appreciated.

As in so much of life, cynicism regarding this project is the easy way out. Crystal Cruises must have already done a lot of their homework before going public with the New York Times and other major media outlets. The best way to get anything this challenging done is to be realistic yet optimistic.

She was built to last, and last she has.