Britain Is Now a One-Party System, But That Could Change... 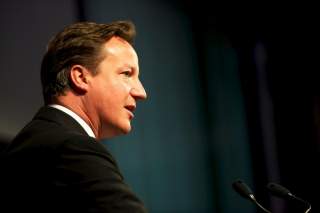 Before the British election in May, political analysts were nearly unanimous in their prophesying: The United Kingdom was entering a new era of politics in which it would be joining the rest of the continent in the chaotic world of multiparty coalition governments. The Conservative-Labour duopoly was declared dead. As is so often the case, the prognosticators were only half right. Labour is, indeed, dead. The Conservatives, on the other hand, are alive and kicking and will likely rule Britain for at least the next decade in what will be a de facto one-party system.

This unexpected outcome is the result of three highly unlikely events. The first occurred on election night, when the Tories beat the odds and won a small, outright majority of seats in Parliament. The second also occurred on election night, when the separatist Scottish National Party nearly swept the Scottish constituencies, cutting the legs out beneath the Labour Party. The third happened this past weekend, when Labour elected a new leader whose beliefs, as American commentator Brit Hume likes to say, are “out there where the buses don’t run.”

Following Labour’s defeat and the resignation of former leader Ed Miliband, the party underwent a soul-searching process. Part of that involved finding a new chief. Because the conventional wisdom was that Mr. Miliband took Labour too far left, the most sensible thing would have been to elect a Tony Blair–like moderate, such as Liz Kendall. Labour’s base, however, did the exact opposite.

The party’s new leader, Jeremy Corbyn, can be reasonably likened to a kamikaze pilot—a man whose allegiance to a particular ideology will lead him to commit (metaphorical) suicide if need be. He is so far to the left that Politico referred to him as a “quasi-communist.” The article goes on to state:

Corbyn is one of those Europeans who blames the West for the bulk of the world’s evils — and who therefore believes that anyone who hates America or Britain or Israel probably has something going for them. He befriends Venezuela, Bolivia, Russia, Iran, Palestine, Hamas, Hezbollah. He blames the Ukraine crisis on NATO. He befriended Sinn Féin, the IRA’s political wing, even as it was blowing up British civilians.

Furthermore, Mr. Corbyn has flirted with withdrawal from the European Union and NATO, in addition to unilaterally scrapping Trident, Britain’s cache of nuclear weapons. As Leader of the Opposition, this man is now one of the most influential people in Britain.

Sadly, his views reflect those of the most enthusiastic Labour Party supporters, many of whom were relative newcomers to British politics. As a result, the base of the Labour Party has shifted dramatically to the left in just the past few months. Tony Blair was essentially excommunicated years ago, but this past weekend’s leadership election has slammed the door in the faces of all of his acolytes, as well. Ms. Kendall, the only Blairite to stand in the election, earned a paltry 4.5 percent of the vote. The final tally, in which Mr. Corbyn won nearly 60 percent of votes cast, represents the finishing touches in Labour’s purification process, in which any pernicious “Tory” influence has been thoroughly expunged.

What are moderate Labour Party members to do? Several prominent frontbenchers have already quit in protest. It appears the sensible members of Labour have three options:

1. Keep calm and carry on. Moderate members could maintain loyalty to Mr. Corbyn. When Labour gets obliterated in the 2020 election, the moderates can boast, “We told you so,” and then go about the business of picking up the pieces and rebuilding. This, of course, means accepting the unpalatable idea of being out of power for at least ten years.

2. Et tu, Brute? The second choice is to await the inevitable implosion of Mr. Corbyn’s leadership. The Economist believes that Mr. Corbyn will not survive to see the 2020 election because he will quit over internecine strife and especially if Labour is severely punished in local and European elections. A Brutus-like figure waiting in the wings could take charge in such a situation, but a leadership shakeup prior to the 2020 election would hardly inspire confidence in the electorate.

3. Make like a tree and leave. The final option is for moderates to accept that the Labour Party is no longer their home. They could either forge a new party or join forces with the Liberal Democrats, whose existence now hangs by a thread. A new party representing the center-left could present a formidable threat to both Labour and the Tories.

Option #3 would be the best for Britain but is the most unlikely. Option #1 has been made far more difficult by Mr. Corbyn’s appointment of John McDonnell—a left-winger who once joked about assassinating Margaret Thatcher—to the position of Shadow Chancellor of the Exchequer. So, option #2 it is.

Perhaps the greatest lesson from this tragicomedy comes from the very beginning of the saga. Labour Members of Parliament nominated Mr. Corbyn so his views could be expressed and a debate could be had, not because they necessarily intended on supporting him. Perhaps much to their dismay, they unleashed a malevolent genie and couldn’t find a way to put him back in the bottle.

Sometimes, you get who you vote for.