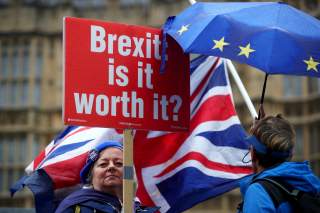 British prime minister Theresa May hangs on, albeit by her fingernails. Brexit seems determined to drag down both her and her government. She might have felt some hope earlier in October, when British and EU negotiators announced that they were near agreement on terms of separation, but only a few days later those same negotiators had to confess failure. Such hopes have arisen before and will no doubt do so again. But despite most everyone’s desire to get this done quickly, the matter of Brexit is too complex and the interests involved too diverse to allow that. The process of separation, with all its anxiety and uncertainty, will hang over Britain, Europe, and the world for the foreseeable future.

This last round of hope and disappointment revolved around the summit of EU leaders held in Brussels the middle of last month. A few weeks before the summit, EU and British negotiators had made optimistic noises about having a draft agreement to present to that summit. But the meetings came and went without such a presentation, much less agreement from the powers involved. Some claimed surprise at the setback. The surprise is not that things failed to move forward but that the negotiators ever voiced hopes. The postmortem of October’s failure made clear how painfully far apart the parties involved in fact were and remain.

There was one hopeful sign. All seemed to accept the $50 billion divorce bill Britain will likely have to pay. Many expected trouble on this matter. Those in Britain more militantly disposed to separation had opposed this price tag. They will no doubt create tension when the matter comes up again, but remarkably the negotiators, on both sides, seemed to accept it. The big problem was Ireland. The Irish Republic is a EU member, and while the UK also remains one, goods and services will pass freely between the two countries. That will change with separation, which all could accept, except that physical checkpoints at the border between the Republic and the UK province in Northern Ireland could cause trouble. The so-called Good Friday agreement that ended the IRA terror in Ireland and elsewhere rests in part on the free passage of people and goods at this border. Physical checkpoints there would unsettle powerful interests on both sides of the border.

London cannot accept proposals mooted in the negotiations that would allow for free traffic between the Republic and Northern Ireland but would establish checkpoints for other trade routes. Though seemingly an easy, if fudged solution, London could not accept an agreement that would effectively violate the country’s constitutional integrity by dividing it into two customs areas. The negotiators discussed compromises that would rid both entry areas of checkpoints by having the UK make regulatory checks before moving goods to Northern Ireland and by conducting other customs and regulatory inspections at business premises instead of at border checkpoints. At this point, however, such fudges remain unacceptable.

In addition to this Irish question (variations on which have, incidentally, have bedeviled British politics for almost one thousand years), there was the enforcement issue. The EU negotiators can see no other arbiter other than the European Court of Justice (ECJ). Negotiators from the British side, cognizant of the resistance Brexit voters have to foreign impositions on British practice, rejected its standing to adjudicate. A compromise from the EU side would have established an EU-UK panel that could refer matters to the ECJ but would not have to do so. Even though such an arrangement would have lifted any forced referral to the ECJ, it nonetheless failed to satisfy the British negotiators. So, with an impasse on this matter as well as Ireland, the mid-October EU summit saw nothing on the matter.

Given the dissention among parties on both sides of the negotiations, it is not apparent that even an agreed document would have won endorsement from the governments involved. In Britain, Prime Minister May holds her government together by only the slimmest majority. She also faces considerable resistance within her Conservative Party, from both extreme Brexit advocates and those who would have preferred to remain in the EU. On all these issues, she and her government walk a fine line. Her position suffers still more, because her government depends on the help from the small Democratic Unionist Party from Northern Ireland, making her extremely sensitive to any compromise concerning the Irish border. Europe has its own disagreements. Germany trades a great deal with Britain, so Berlin is disposed to a speedier and more amicable settlement, while France has pushed for even preliminary negotiations to stipulate what the EU will rule out of any future trade relations. Complicating matters still further, the anti-EU bias of Italy’s still-new government impels the remaining members, including France and Germany, to make exit more rather than less difficult.

Far from an easy agreement, it looks now as thought the negotiations for separation will extend beyond the supposed deadline in late March 2019. Prime Minister May has already voiced that prospect. If she is doing this even now, nearly half a year before the deadline looms, she must be well convinced that little agreement will exist next spring. It may, in fact, take the rest of 2019 to arrive at a divorce settlement. And only then can negotiations begin on the nuts and bolts of the trade and regulatory agreements between Britain and the EU.

This is all a far cry from British hopes at the start of this process. Her majesty’s government had hoped to negotiate both the divorce from the EU and future trade relations in one package before the actual separation occurred. The government and most of British business wanted to secure the persistence a common trade area, and “the City,” as British finance refers to itself, had sought some arrangement that would privilege British finance within Europe. Whitehall had backed the City. Finance is an inordinately large part of the British economy. But the Union, pressured by France and the EU bureaucracy, insisted that things had to occur in two stages. First London and the EU would need to negotiate the terms of the divorce. Only then would the EU consider separate negotiations on trade and financial services. This second round of talks promises to last at least as long as the comparatively straightforward separation agreement. Nothing definite seems likely before 2020 at the earliest and perhaps not even then. As this long process drags out, it will no doubt look at times as though nothing on trade will settle and that Britain and the EU will wind up falling back on World Trade Organization (WTO) trade rules as if they had never had close economic ties.

For all the apparent difficulty, however, it nonetheless seems likely that eventually Britain and the EU will reach an agreement, not just on the divorce but on trade and finance as well. Exhibit one in this more optimistic take is the importance to Britain of European trade. According to IMF figures, some 44 percent of UK exports go to EU members, and a further 14 percent of UK exports go to countries outside the EU under agreements made by the EU. Together this trade accounts for a not insignificant part of the British economy verging on 20 percent. Meanwhile, some 53 percent of UK imports come from the EU. Many have speculated that after exit, Britain will open to the world and in time the EU will become less important to the UK economy. True as this may be, and it no doubt is, economics, quite apart from past agreements, will nonetheless dictate a European orientation for Britain. At the same time, the EU needs Britain. Almost 20 percent of EU exports go there, making Britain the second largest EU export market. Still more significant, a high percentage of German exports, verging on 8 percent, go to Britain, a major inducement for this most powerful and influential EU member to make a deal regardless of French animus toward England.

It is a similar picture of symbiosis when it comes to finance, perhaps painted in even bolder colors. As a member of the EU, British finance had a special status within the EU. It was beneficial to the City, of course, giving it a European edge over the only two worthy global competitors, New York and Tokyo. The relationship also gave European business the advantage of world-class financial backing. Though London can no doubt meet New York and Tokyo toe to toe, it has every reason to want to recreate after exit all or some of its former close relationship with Germany, France, Italy, et. al. Especially since neither Frankfurt, Paris, or Milan count as competitors in finance, EU members have every reason to seek ways to continue these close relations as well. Most EU parties also have reason to reach an accommodation.

If such eventualities look clear, then it is also apparent that it will take a long time to get there. It is already obvious how long the divorce agreement is taking. The trade agreement in goods and services, even financial services, will likely take even longer. Everyone will have passed into a new stage of life before all these matters settle, however clear it also is that Britain and Europe will reach such a mutually beneficial settlement. During that long time, markets, diplomats, and domestic politics—in Britain and Europe—will have to bear up under the anxieties and uncertainties associated with the negotiations. In an ironic twist, these prospects, painful as they are to so many, may redound to Theresa May’s benefit. She may see Brexit as the bane of her existence, but for all the threats to her leadership, it is also apparent that no one, inside and outside her party, wants power while Brexit—and all its career-destroying potential—remains unsolved.