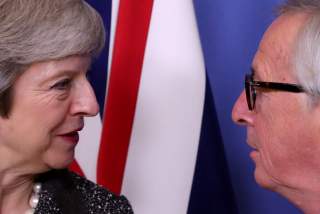 The British political establishment can't seem to make up its collective mind about Brexit. Meanwhile the European Union's Jean-Claude Juncker says that he will offer "clarifications" to help British prime minister Theresa May push her Brexit deal through Parliament—but no “renegotiation.” It seems unlikely that “clarifications” will do the trick.

The British economy may be on go-slow in advance of Brexit, but with the Eurozone descending into recession for the third time since 2008, it’s hard to understand why the British are so worried about their economic future outside the European Union. Looking beyond the quarterly results calendar, the EU has big structural problems too. Not least among them: an addiction to the old-economy manufacturing industries of the twentieth century.

When it comes to the new economy of the twenty-first century, the European mantra is “if you can't beat them, tax them.” France rung in the new year with a new GAFA tax on digital revenues. That’s “GAFA” as in Google, Apple, Facebook, and Amazon. France’s Yellow Vests will surely celebrate the jobs created by further stifling Europe’s moribund online economy.

The GAFA gaffe comes hot on the heels of last year’s €4.34 billion Google fine for anticompetitive behavior.  As a result, Europeans now have to pay a licensing fee to access Android apps. Come March 30, expect a brisk trade in Europeans picking up fee-free Android phones while passing through Heathrow.

That is, if Heathrow is still open. Hard-core Remainers warn that all flights between the EU and the UK will cease with a no-deal Brexit. “Fog in Channel; Continent cut off”—indeed!

Brexit fearmongering tends to focus on the old economy of planes, trains, and automobiles. Will the UK and EU recognize each other’s pilot licenses? (They will.) Will the French post adequate numbers of customs inspectors on their side of the Channel tunnel? (They won’t.) Will Britain’s foreign-owned automakers move some production overseas? (They might.)

The smooth flow of car parts from France to the English Midlands is hardly the stuff that economic dreams are made of. Power in automobile value chains is rapidly shifting away from manufacturers and toward online netware services like Uber and Lyft. Of course, the EU is working to shut them down, too. Whether or not it will succeed is another matter.

If long-term economic forecasting is a mug’s game, then at least one thing is certain: the European Union’s centralized, controlled, grant-subsidized, government-led approach to technology development virtually guarantees that the future will be made elsewhere.

Twentieth-century industries required logical minds and rational thought processes to organize ever more complicated production systems. These played to European strengths. When it comes to disciplined mental training to perform well-defined tasks, the Japanese are their only rivals.

But the emerging networked technosystems of the twenty-first century require intellectual flexibility more than sheer rational thought. Logic is out; creativity is in. If you want to engineer a car, go to Germany; if you want to reimagine personal transportation, go to California.

For several decades, almost since it joined the EU in 1973, the United Kingdom has been balanced on the edge between the world of engineering and the world of imagination. The UK gave up on large-scale economic planning during the Thatcher era, but it has never quite embraced the wide open economic frontiers of the American West. Its atmosphere is more like that of the Northeastern United States: sensible, but not stifling.

With the EU pursuing an “ever closer (economic) union”—and with EU institutions like the European Commission and the European Court of Justice tacking toward an increasingly interventionist approach to economic management—the Brexit vote coincided with an important tipping point. “Remain” was a bet that the European Commission knew how best to plan Europe’s (and Britain’s) economic future. “Leave” was a leap of faith in the ability of individual British people, companies, and institutions to create economic futures for themselves.

In the early 1800s, Napoleon organized nearly all of Europe into a continent-wide trade embargo of the United Kingdom. Being cut off from England nearly destroyed the French economy. In the two World Wars of the first half of the twentieth century, Germany, with access to all the resources of Europe, was reduced to starvation by the Allied blockades. Today’s talk of the EU “punishing” the UK by penalizing British trade is just as short-sighted as the last two continental systems.

It is all the more short-sighted because trade just doesn’t matter like it used to. International trade as a percentage of global GDP has been declining ever since the Global Financial Crisis of 2008–09. The container ship is no longer an icon of the future. It is an emblem of the past.

The UK is already much more advanced than the EU in shifting from exporting old-fashioned goods to exporting new-style services, but even that doesn’t truly capture the emerging impact of the innovation economy on trade. The value of goods themselves is increasingly driven by the intellectual property embedded in them. Steel is cheap. Ideas are expensive.

Membership in the European Union chained the United Kingdom to a goods-based economic future imagined in Brussels and Berlin. The UK might do well in that world, but it would never thrive. Britain will never again out-farm France or out-manufacture Germany. Britain’s comparative advantage doesn’t lie in goods. It lies in liberty.

A post–Brexit Britain may (or may not) suffer job losses in automobile manufacturing, or even in banking. It can only gain in freedom of thought and action. In the twenty-first century economy, freedom is the key. Just look at Silicon Valley.

The twenty-first century “innovation” economy won’t be planned by the European Commission. It will be imagined by the likes of Google and Uber. Brexit frees Britain to build on its strengths by aligning itself with the most dynamic economic actors of today’s networked world.

No wonder individual Europeans are rushing to get into the UK while they still can. They’re very rational people, and they which side of the Channel represents the future. No one is hiding on lorries to sneak into Calais. It’s Britain they want to be in come March 30.