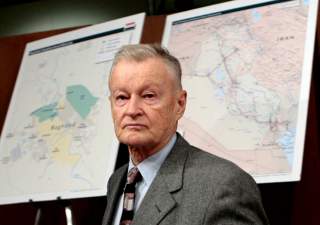 JUSTIN VAÏSSE’S Zbigniew Brzezinski: America’s Grand Strategist is the first biography of its kind published in the United States. Why it took so long is surprising. The author, too, is a surprise—a talented French historian turned practitioner who has been the director of foreign policy planning at the French Quai d’Orsay for the past several years. By his account, it is while he was a senior fellow at the Brookings Institution that he met Brzezinski in 2008 and developed “a relation of trust” with him. Vaïsse was given access to Brzezinski’s papers, though not his personal White House diaries, and thus the book was born. It is not an authorized biography, but Brzezinski must have been pleased by what he knew of the work (first published in French shortly before his death). The readers, too, will be pleased. This is a solid account of Brzezinski’s absorbing journey. But it is not a whole life story. In a sense it starts late, with not enough said of Brzezinski’s formative years when he became the person he was, and it ends early, with not enough said of his closing decades during which he grew into “America’s grand strategist.”

Vaïsse’s intention was to give “particular attention to the four years Brzezinski spent at the White House,” but Stuart Eizenstat’s authoritative Jimmy Carter: The White House Years offers a fuller account of them. Unlike Vaïsse, Eizenstat is a natural for such a book. A core member of Carter’s Georgia Mafia, he knew his subject and shared his history. His narrative relies not only on the president’s papers but also on thousands of pages of his own handwritten notes and hundreds of interviews held with the most significant participants from those years. The revisionist assessment of the Carter presidency he offers is overdue on issues of national policy, and it is pointedly timely on questions of presidential character. This is not just a good and informative book: it is a necessary read, even though the writing is occasionally tedious and some conclusions overstated. Indeed, next time you belittle Carter, think again and look around.

“WE ALL have our stories,” wrote “Madam Secretary” Madeleine Albright, whose own “inconceivable” career—her word—got its delayed start under Brzezinski forty years ago. The very concept of a biography begins as a dialogue between the author and his subject, with the reader as a passive participant. The dialogue must somehow combine what the narrator chooses to ask with what the subject is prepared to share and what the reader wishes to know. “I am an American, Chicago born” says Saul Bellow’s Augie March, as if that introduction was sufficient as a reminder that history begins at birth. But there is no one to tell what sort of a tale the future will tell. Only over time does the past build up, a big leap or a small step at a time, until the historian reconstructs it, a word and a chapter at a time—and, borrowing again from Albright’s memoirs, “describe not just what happened but also why and how events were influenced by human relationships” which cannot all be related or even remembered. T. S. Elliot put it thusly: “The historical sense involves not only the perception of the pastness of the past, but its presence,” or at least its rendition.

The late Tony Judt distinguished between “the facts on the ground” and “the facts inside”—those that fill the readers with knowledge and those that speak to their soul. Vaïsse’s Brzezinski provides mainly the former, including bits of marginal or undigested research, like his salary history as a younger professor at Columbia University, and other odd references or characterizations, overlooked by the editor, like Brzezinski’s “solid” scholarship and his “light” foreign accent, both later corrected. More significant, though, are the missing “facts inside”—emotions, memories, a sense of place and an idea of self—all those things past that remain present long after much of everything else has been forgotten.

Thus, Brzezinski grew up rather extraordinarily, at a time which Brzezinski later called one of mega deaths and mega myths, and which left, he told Vaïsse, a “deep” and “enormous impression” on him as a young boy. But little is said about what those impressions were, why he “often” was “stressed” over “how different he felt from the wasp elite,” what he wrote in his “detailed diary of the war’s daily developments” and which he “discussed at length with his father.” More is said about his early years at Harvard, Brzezinski’s first stop in the United States, where he “began to feel like an American, and, even more strikingly, to be treated like an American.” But how did that come about? To become an American was “easier” than to be American, confided Hungarian-born historian John Lukacs—always “a complex fate,” added historian Henry Steele Commager, whether one “came from England and Scotland, from Holland and Baden and France,” let alone Warsaw, or Furth for Kissinger and Prague for Albright.

To be sure, Brzezinski barely lived in Poland: only three years, as opposed to about ten in Canada, while Kissinger spent the first fifteen years of his life in Germany, including five with Hitler at the helm. Eighteen months after he had arrived in the United States, young Kissinger was telling his grandfather, who had been left behind, how difficult it was to adapt to his new country. His biographer, Niall Ferguson, tells us a bit more about this early struggle, which Kissinger himself had preferred to ignore. But what about Brzezinski—was there only little or even no ambivalence? Unlike Henry, born Heinz, Zbigniew did not change his name, although he kind of shortened it, and he seemingly remained comfortable with a heavy foreign accent which he never tried to lose. Could it be that, unlike Kissinger, the goal for Brzezinski was not to become somebody else but to be something more? From the start, therefore, the person, the academic, and the strategist were not “different men,” as Vaïsse suggests; rather, each completed the others—not only the child as the birth of the man, but also the man as the inspiration for the academic, the academic as the guide to the strategist, and the strategist back to the child, the man and the academic.

Reading Vaïsse does not help one gain a feeling for the person Brzezinski became—what the ghosts might have asked him about the all-American face he wore with such apparent ease, even as he tried it out for good measure as he moved on and up. And when the ghosts did ask, as they surely must, were there answers, Zbig, and in what language? Lacking them are your biographers and followers—historical raconteurs and even voyeurs—turning your history into “the relentless unforeseen,” as Philip Roth called it, chronicled with tones of inevitability that turn the past into an epic at the cost of the smaller things that gave it meaning along the way?

AS IS the case with the Brzezinski book, the surprise with Eizenstat’s work is that it would be coming so late. While a number of scholars have singled out a few achievements, especially in the realm of foreign policy, Carter has consistently remained the least appreciated of all nine Cold War–presidents, often derogated as a spineless ninny whose presidency served as the mere anteroom for Reagan’s. At last, though, Eizenstat has broken the mold and historians will prove more reluctant to limit Carter to an extended and painful Ford-like parenthesis between Nixon and Reagan. But, however hard they now try to do Carter historical justice, none will be more persuasive and better informed, and none will show the intensity of feelings and the richness of Eizenstat’s book—“which was,” the author writes, a “labor of love over a quarter of a century.”

Carter was, insists Eizenstat, not only “a good and productive” president but “one of the most consequential in modern history.” That is overstated, of course. More convincingly, Carter was a necessary president, meaning, an indispensable transition between Nixon, who had debased the idea of America, and Reagan, who restored America’s faith in itself. After Nixon, America needed moral cleansing and Carter helped provide it, at home and abroad. But after four years of Carter, a different style of presidential leadership was needed, and Reagan provided it. No Nixon no Carter, and who is to tell that we would have been better off with more Ford (and more Kissinger); but no Carter no Reagan, and who is to tell that more Carter (and more Brzezinski) would have produced the outcome we know now.

In retrospect, this proved to be a well-choreographed presidential pas de trois: Nixon who kept America in the world but devalued America’s good name, Carter who restored America’s good name but devalued America’s leadership, and Reagan who took America up and brought the Soviet Union down. In so doing, notice, each president became what he did not want to be: Nixon as a dealmaker who originated détente when containment seemed to be running its course, Carter as a reborn hardliner who redirected the power curve of history when Moscow was surging, and Reagan as a peacemaker after the Soviets found themselves hopelessly trapped in Afghanistan. Together they ended the Cold War, with a decisive—nay, indispensable—assist from George H. W. Bush.