Bush 41 as the Anti-Trump 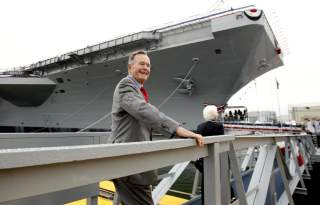 Twice in 2018, a major Republican official of an earlier generation has passed away—the first being Senator John McCain a few months ago. And twice the glaring, outsized comparison of these figures is the to current Republican in the White House.

Much has been made of the bipartisanship both McCain and former President George H.W. Bush (41) sought during their periods of influence. The U.S. media particularly are fond of portraying American leaders in this manner, and certainly boosters of both Bush and McCain will hype this. That said, both were pretty partisan Republicans. Both were committed to the GOP their entire lives. Both said less than they might about the wayward course of the Republican party into dangerous territory in the last two decades, especially as Sarah Palin and Donald Trump arose. But by comparison with the current ideological rigidity of American conservative moment and its vocal media arms like Fox News and talk radio, they were a paragon of transpartisan virtue.

Similarly, much has been made of their foreign policy experience. As combat veterans, both had automatically credibility. While McCain wandered into the outer reaches of neoconservatism—‘we are all Georgians now’—Bush really did seem to learn the unpredictability of protracted war. Where McCain notoriously argued for interventions almost anywhere American interests where even vaguely threatened, Bush show far greater restraint. He famously chooses not to march on Baghdad in the spring of 1991, after the defeat of Saddam Hussein in Kuwait.

Long before the more recent debates on American over-extension, Bush already foresaw this possibility. For this he deserves credit. Trump of course has no real grand strategy, so Bush was far more sophisticated in that he actually seemed to think about the wider use of American power in the world—the ‘new world order.’ Trump seems to view U.S. alliances and relationships in a bluntly transactional, short-termist manner. Bush never would have said, for example, that U.S. friends like Canada or the EU are ‘ripping off’ America.

But it is really temperamentally that the comparison emerges most sharply. Trump has approached the office of the presidency almost as a joke, as the greatest reality television series or media gimmick of his long career manipulating journalism and television. McCain and Bush, by contrast, were never particularly good communicators, especially when matched against smooth talkers like Bill Clinton or Barack Obama in the presidential campaigns of 1992 and 2008.

Trump has routinely demonstrated a staggering unawareness of policy detail. (Matt Yglesias has been particularly relentless in pointing this out.) In his almost four years in the policy spotlight, Trump has never once given a detailed or programmatic policy speech. Even on the major initiatives of his presidency, such as the repeal of Obamacare, the tax cuts of 2017 or the sudden reverse-course engagement with North Korea, he has simply abjured providing detail of almost any kind. He released, for example, a national security strategy late last year as required by law. But Trump does not seem to have read it, nor does he cite or quote from it, and everyone has consequently ignored it. It is impossible to imagine something like that happening under a Bush or McCain presidency.

Trump much prefers campaign-style rallies where he engages in protracted free-association and call-and-response theatricality (the ‘lock her up’ chanting). All of this reflects Trump’s time as a media personality. It makes for great entertainment and endless debatable quotations and commentary. As Trump has repeatedly said, his presidency has been a boon for the media, because reporters talk about him so often and viewers tune in to watch. But critically, none of it is policy development. Trump is not floating proposals to his base, testing new ideas or deals before the media, or otherwise explaining a controversial position to the nation. He almost always speaks instead of himself.

In short, below all the made-for-TV melodrama of this presidency, Trump does not seem to really know what he wants to do with his time in office— besides be popular—and he is woefully unprepared should a genuine crisis hit. The contrast here with McCain and especially Bush is just off the charts. Bush had decades of public service and training behind him when hit with the collapse of communism in his first year as president, or Saddam Hussein’s invasion of Iraq in his second.

Bush, like McCain, clearly cared about these sorts of issues and boned up on them. Trump by contrast cannot ever get through briefings or briefing papers. He watches TV rather than read. He pushed out National Security Advisor H.R. McMaster because the latter’s long briefings bored him, and in the run-up to a U.S. president’s first-ever meeting with a North Korean leader, Trump clearly did not prepare.

Finally, Bush, out of sheer blueblood sense of duty, would never have dragged the office through the rhetorical mud and self-dealing Trump years has occasioned. Bush’s patrician sensibility surely had its downsides. He often seemed out of touch; indeed that was his caricature on ‘Saturday Night Live’ at the time. And Bush-style establishmentarianism is indeed precisely what GOP voters so pronouncedly rejected three years ago.

But Bush would never have spoken the way Trump does about either himself or his opponents. Nor would he have countenanced Trump’s effort to turn the GOP into something akin to the French National Rally—racist, semi-authoritarian, gangsterish. Bush, notably, did not vote for Trump in 2016, and one wonders if Trump is welcome at his funeral, much as he was not at McCain’s.

This closes with an irony. Bush 41’s elite aloofness may have cost him in public opinion, but his general competence—on Iraq and the budget most conspicuously—did not open the door to Trump. That was his son. The failure of establishment Republicanism during the Bush 43 presidency—the Iraq debacle, the appalling response to Katrina, the financial crisis—cleared the path for Trump by badly discrediting decades of GOP claims to seriousness and managerial competence—what made me a Republican back in those days. Would that Bush 41 had been re-elected and his son not.