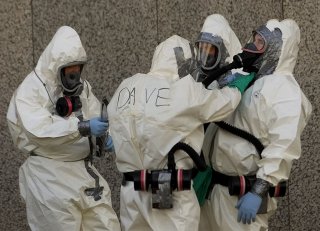 The coronavirus pandemic is straining most federal and state emergency resources. But the strain—and the government’s response—would have been far worse, if legislation enacted in the previous decade had not laid a solid foundation of expanded homeland security and emergency medical preparedness.

The Department of Homeland Security (DHS) was created in response to the 9/11 terrorist attacks—but that wasn’t the only impetus. Another significant motivating factor was the 2001 anthrax attacks.

The latter attacks revealed serious weaknesses in America’s preparedness for withstanding biological or chemical weapons of mass destruction (WMD). This sparked several initiatives to provide surge capabilities in the event of a regional or national medical disaster.

In creating the DHS, the Homeland Security Act of 2002 transferred a number of biodefense capabilities from other cabinet agencies into the new department. For example, it folded a number of biological, chemical, nuclear, and other WMD prevention and response operations, such as the Defense Department’s National Bio-Weapons Defense Analysis Center into the Science & Technology Directorate at DHS.

It also transferred the Federal Emergency Management Agency and the National Pharmaceutical Stockpile (now the Strategic National Stockpile) into the new department. Clearly, responding to major medical events, including biological threats, has always been a core component of the DHS mission.

Once the new department was up and running, Congress gave it legal authorities to supercharge pandemic and WMD preparedness efforts. The first was the Project BioShield Act, signed into law in July 2004, as part of a broader strategy to defend America against the WMD threat.

Project BioShield was created to accelerate the research, development, purchase, and availability of effective medical countermeasures against a variety of threats, initially focusing on WMD agents. Launched with an initial fund of nearly $6 billion, Project BioShield has become the central facility through which critical medical countermeasures, such as vaccines, therapeutics, and diagnostics, are developed and purchased. More than fifty drugs funded through BioShield have been approved by the U.S. Food and Drug Administration.

The BioShield law also created the Emergency Use Authorization (EUA), giving the Secretary of Health and Human Services (HHS) Secretary expanded authority to deploy resources from the Strategic National Stockpile and to clear countermeasures and other medical resources so that they can be used, even if they have not fully cleared FDA testing protocols.

One of the first steps taken in response to the current pandemic was to declare a public health emergency, which allows the secretary to utilize the EUA. The administration issued that declaration in late January, well before pandemic concerns dominated the news.

Another key measure, the Public Readiness and Emergency Preparedness Act (PREP Act), was signed into law in 2005. It authorized more than $3 billion for pandemic preparedness and gave the HHS Secretary limited authority to provide immunity from liability for claims arising from the use of pandemic countermeasures. These protections applied not just to the manufacturers of the countermeasures but also to those who distributed and administered them.

Given the voracious appetite of the plaintiffs’ bar to launch lawsuits based on just those types of claims for any alleged medical injury, the PREP Act was a key step in ensuring the rapid development and use of cutting edge countermeasures in the event of a medical emergency.

In December 2006, President George Bush signed the Pandemic and All-Hazards Preparedness Act (PAHPA), a law that dramatically reorganized and expanded HHS’s authority with respect to natural and manmade medical catastrophes. Among other things, it established the post of Assistant Secretary for Preparedness and Response to oversee matters related to WMD and pandemic preparedness and response.

PAHPA also brought the Strategic National Stockpile back into HHS, where it was originally launched, as a way to centralize medical disaster response capabilities and better sync the Stockpile’s role as the cache for countermeasures developed through BioShield.

One other highly relevant program initiated by the Bush administration was the National Bio and Agro-Defense Facility. A plant and animal disease research facility, it gives the United States a capability that had been sorely lacking. Previously, this kind of work depended solely on the dated laboratory system located on New York’s Plum Island.

Of course, the federal government can’t fight an epidemic on its own. Most of the in-the-trenches work must be done by the private sector and state and local governments. And once America has the disease under control, it will take an equally concerted effort to get the U.S. economy back on track. Already, some of the nation’s top experts have formed the National Coronavirus Recovery Commission to plot the best way forward to restore economic health as well as public health.

What can America do to improve the response to the next pandemic? When the United States reaches the other side of this coronavirus curve, it will need to focus on improving its supply chains, remove its dependence on China for critical resources, and increase stockpiles of personal protective equipment and vaccines. In the meantime, its citizens can be thankful for past organizational preparation and new legal authorities that have been invaluable in fighting this pandemic.

Brian Finch is a visiting legal fellow and Lora Ries is a senior research fellow specializing in homeland security at The Heritage Foundation in Washington, D.C.