Bush or Obama? GOP Divided On Who Caused ISIS’s Rise. 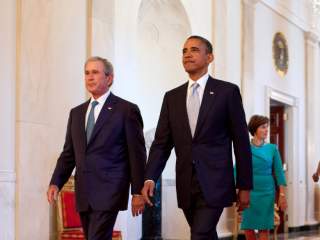 The question that popped out of the GOP presidential debate Tuesday night with the most force is a question that the country has been grappling with, and politicians have been wrangling over, for some years now: Who is more responsible for the rise of ISIS, George W. Bush or Barack Obama? This is not just a parlor-game question for history-class skull sessions or cocktail-lounge disputations. It lies at the heart of the greatest fault line within the Republican Party on foreign policy matters.

Those who identify Bush as the greater progenitor of the Middle East’s current chaos inevitably harbor a broader foreign policy philosophy pertaining particularly to that troubled region, but also to other regions. They oppose regime-change initiatives as a matter of principle and pragmatism. They shun the idea of spreading democracy through lands with no democratic tradition. They reject humanitarianism as a guide for foreign policy thinking. They place national interest at the center of their geopolitical outlook and emphasize the limits of military power in shaping world events.

Those who place most of the blame on Obama tend to favor regime change as a legitimate and workable foreign policy thrust. They embrace humanitarianism and defend the idea of spreading democracy around the world. They celebrate the projection of U.S. military power and seldom warn about its limits, though they tend to be wary of advocating ground troops in the country’s current political climate. They also tend to favor an internationalist outlook over a nationalist one.

This fault line was on full display at the Las Vegas debate, which was focused on international relations. Indeed, the Tuesday event demonstrated more starkly than we have seen before that there is a true debate within the GOP on foreign policy.

Rand Paul made clear his views when he said it was a mistake for the United States to arm enemies of Syrian President Bashar al-Assad. That merely "created a safe space, enlarged the space" of operation for ISIS, he added. Further, the U.S. invasion of Iraq and the country’s moves to depose Libyan leader Muammar Gaddafi had created civic havoc and power vacuums, which further enlarged the territory ripe for ISIS expansion. He said the question of regime change "is the biggest debate we should be having tonight." Some of his opponents still want it, he added, but it merely creates "chaos and the rise of radical Islam."

Cruz echoed that sentiment, noting particularly the results of the Libyan action. We were told, said Cruz, that if Gaddafi were toppled, moderate rebels would take over. Instead we got "a terrorist war zone run by jihadists." He decried Obama’s efforts to undermine Egyptian President Hosni Mubarak when he came under fire from protesters within his country. Cruz also criticized those who now want to topple Syrian President Bashar al-Assad as he struggles against opposition forces, including ISIS, bent on destroying his regime. "If we topple Assad," he said, "ISIS will take over Syria." He dismissed what he called "this Woodrow Wilson democratic promotion," which he called a distraction from the central focus of keeping America safe.

Trump decried the huge U.S. expenditures for foreign adventures since 9/11. "The Middle East," he said, "is totally destabilized, a total mess." On Assad, he said, "We have to do one thing at a time. We can’t fight Assad if we want to fight ISIS," since ISIS and Assad are enemies. "We have to get rid of ISIS first."

The most vociferous exponent of the other viewpoint was Rubio, who dismissed the idea that American actions in the Middle East had helped spawn ISIS. Assad, "a puppet of Iran," he said, "is the main reason ISIS exists," because his harsh rule generated an insurgency that destabilized Syria, thus providing an opening for the jihadist movement. Further, he extolled the toppling of Iraq’s Saddam Hussein in part because, he said, it stirred Libya’s Gaddafi to quit his nuclear program and stop fomenting terrorism. But he also defended the toppling of Gaddafi notwithstanding his promise to stop threatening Western or American interests.

While acknowledging the United States will have to deal with some dictators we don’t like, he expressed contempt for "anti-American dictators like Assad" and added that "if they go, I won’t shed a tear."

Kasich agreed. "Assad has to go," he said, adding that this would deliver a salutary "blow to Iran and Russia," two Assad allies. For good measure, he suggested the United States should deliver to Russia "a punch in the nose. They’ve gotten away with too much."

Fiorina firmly placed herself on the spectrum by blaming Hillary Clinton and Obama for the rise of ISIS. They took the U.S. military out of Iraq too soon, she said. Bush made clear he stands with his brother when he advocated a U.S. no-fly zone over Syria. Christie added a touch of bellicosity when he vowed to enforce his own no-fly zone by shooting down any Russian pilots "stupid enough to think this president [meaning himself] would be as feckless as Barack Obama."

Paul promptly called that "reckless" and accused the New Jersey governor of flirting with World War III. He pointed out correctly that Russian planes were flying over Iraq and Syria at the invitation of those countries’ governments. Hence, they aren’t violating sovereign air space. To shoot down one of those planes over such sanctioned territory would be highly provocative. Christie dismissed Paul’s warning by saying what he really considers "reckless" is "allowing Russia to take Crimea."

Here we see the intensity of the GOP’s more aggressive foreign policy advocates. For centuries Crimea had been part of Russia, relinquished by Soviet leader Nikita Khrushchev when its transfer to Ukraine didn’t affect Moscow’s control over that crucial strategic possession. Only after Western nations, particularly the United States, sought to wrest Ukraine, including Crimea, from Russia’s centuries-long sphere of influence did Russia act to ensure it wouldn’t lose this integral part of its territorial heritage.

To suggest it was "reckless" to allow this turn of events demonstrates just how far some Republicans would like to go to insert America into the business of other nations far from American shores where no serious U.S. or even Western interest is at stake.

This was a remarkable debate. It certainly had its ugly moments, particularly a couple of exchanges between Trump and Bush, who clearly despise each other. And it wasn’t devoid of silliness—as, for example, when Fiorina suggested that the way to get China to help reign in the belligerent North Koreans would be to "push back on China" on unrelated issues, such as currency matters and China’s ambitions in the South China Sea. In other words, hit them with a stick before asking for their carrots.

But the debate produced a sharply delineated disagreement between those who attribute the ISIS rise primarily to George W. Bush’s policies and those who largely blame Obama. This is healthy. The party needs such a debate in these times of growing global instability. So does the country.