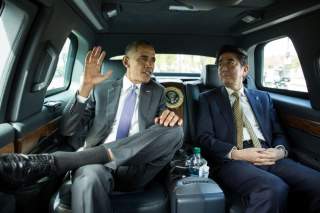 A lavish dinner at the White House hosted by the Obamas and a speech to members of Congress will no doubt be the most high-profile events for Japanese Prime Minister Shinzo Abe’s week-long tour of the United States later this month. But when it comes to deepening bilateral ties and garnering support for Japan, his visit to Los Angeles may actually have the biggest impact in promoting bilateral relations.

After all, California is home to the largest number of Japanese Americans in the United States and has produced some powerful national leaders such as Congressman Mike Honda and former Transport Secretary Norman Mineta. Yet while Tokyo has been eager to court such high-profile Japanese Americans, little effort has been made to woo the Japanese American community at large. Given the political and economic realities that Japan faces, it would be in Tokyo’s best interest to make a more concerted effort to woo a population that would be preternaturally inclined to at least pay attention to the goings-on in Japan.

The premier is slated to meet with several Japanese Americans who were forcibly imprisoned in U.S. internment camps during World War II, as well as local community leaders. But while such meetings will certainly allow Abe to shed light on the United States’ own shameful past during the war, this will also be an opportunity to jump-start interest in Japan and ensure continued U.S. engagement across the board.

According to the Modern Language Association, the number of U.S. students studying foreign languages fell for the first time in 20 years by 6.7 percent in 2013. So perhaps it’s no surprise that the popularity of Japanese too dropped by 7.8 percent to 66,740 students. Yet bucking that broader trend were Chinese and Korean. The number of Chinese language students actually rose by 2 percent to 61,055, while those studying Korean surged by nearly 45 percent to 12,229. Learning a language is almost a surefire way to encourage lifelong interest in the country where it is spoken, so the decline in the popularity of Japanese can be a precursor to a decline in interest not just in the language, but the country at large down the line.

Tokyo has made considerable commitments not only to cultivate a new generation of Japan experts, but also to broaden interest and ultimately, support for the country. Tokyo’s latest big initiative to boost outreach is to establish a so-called Japan House to promote the country’s culture and history in Los Angeles. Two other “Houses” will be established in London and Sao Paulo. The effectiveness of the Japanese government’s plan remains to be seen. But in the meantime, an active and sustained effort to reach out to those of Japanese heritage and encourage their interest in Japan makes good sense.

But simply expecting Japanese Americans to be excited about Japan’s future because of their familial ties is not enough. For Japan to be truly attractive for Japanese Americans and to the world at large, it should also be a place where those who want to, can assimilate into mainstream society. That ultimately means a Japan that is ready to embrace diversity, and welcome the very real evolution in Japan’s population at large.

There is no doubt that Japan’s demographics are rapidly changing. Its working age population is projected to shrink to 71 million by 2025 from 79 million, while its population shrank by the largest amount on record in 2014. At the same time, one in 49 children born in the country today has a non-Japanese parent, according to the Japanese health ministry. Providing greater opportunities to biracial Japanese and accommodating the needs of those who are not fluent in the language certainly make good sense in light of those demographic realities. But more importantly, encouraging a more diverse population to contribute to the country’s economic and political bases will ultimately lead to a stronger, more globally competitive Japan.

As Prime Minister Abe reaches out to Japanese Americans in Los Angeles, his real challenge will be to encourage them to contribute their resilience and drive to help propel Japan forward, instead of simply lobbying for their support for Tokyo’s directives. His visit could be a firm step forward in developing a true partnership between the two sides.