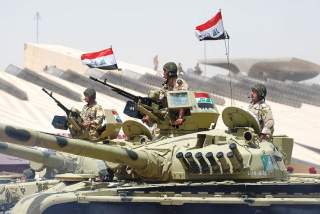 Twenty-five years ago this August, Saddam Hussein’s army rumbled into Kuwait, initiating an era of U.S. military engagement with Iraq that continues to this day. What to do about Iraq has dominated the American foreign-policy debate for a quarter-century, and will again be a central issue in the 2016 presidential election. The chairman of the joint chiefs just visited Iraq to review our military operations and assistance there, and Secretary of Defense Ashton Carter just visited the country as well.

Unfortunately, Washington’s emphasis on the military repeats a past mistake: focusing on a strategy defined by troop numbers, targets and what it would take for “us” to win. The headlines hide the real issue: whether Iraq's Shia, Kurds and Sunni Arabs are prepared to share power in a united Iraq, even a decentralized one.

The rise of the Islamic State is the latest chapter in a long struggle for political power in Iraq. So any assertions about what “we” can do must be coupled with a healthy dose of humility. More than ever, Iraq's future is in the hands of Iraqis. It is wearisome hubris for America to think that it will decide Iraq's future.

But we can use our leverage more effectively. This requires patience—because while the Washington debate impatiently moves at warp speed, political change in Iraq comes glacially.

There were myriad problems with America's engagement with Iraq after 2003, but none more pernicious than the drive to accelerate Iraqi consensus building and decision making. Indeed, the main reason the United States pushed to keep former prime minister Nuri al-Maliki in his job in 2010 stemmed from impatience. Washington concluded it would take too long for any other potential prime minister to emerge, and hence there would be no empowered Iraqi negotiating team with which to arrange the future of the American military presence. Now we need to give the Iraqis time and space to resolve their political issues, even as they address military challenges.

This is not the same as giving them a blank check. It should be a general rule of American policy that we don't give military aid, much less undertake military operations, without securing agreement about the strategy and goal. And we do not agree with all those in Prime Minister Haider al-Abadi's dominant Shia political coalition. Therefore, our challenge is to help secure a political arrangement that will underpin the gains we can help secure militarily. We must not lose sight of Iraqi politics, even as we work on military operations.

This starts with giving Abadi incentives to deal with the hardline, Iranian-backed Iraqi Shia that are a powerful part of his coalition and who block political concessions to the Kurds and Sunnis.

Maliki is still closely linked to this Shia faction. If it ultimately carries the day in Baghdad, there will be fighting between Iraqis for many years, but it won’t be our fight. 160,000 U.S. troops couldn't control Iraq a decade ago, so a far smaller number now most certainly won't. It is vital to remember that the “Sunni Awakening” starting in 2007 was not just a result of the American military surge, but also a sense of political opportunity created by genuine promises that the Sunni Arabs would be included in mainstream Baghdad politics, government hiring, as well as project largesse. Maliki's breaking of those promises right under our nose is what reignited the Salafi-jihadi fire.

Prime Minister Abadi, while not perfect, is more aligned with an inclusive vision of Iraqi politics. Yet he is outgunned. So how should we support Abadi in his contest with Shia political hardliners? Our strategy must be rooted in two interrelated principles: conditionality and accountability.

First, the United States needs to condition assistance to the Iraqi government in steadily implementing the inclusive reform program initiated when Abadi took office last September. If the Shia and Kurds block these steps, then no weapon we provide will stem the Islamic State's recruitment and slow Iraq’s spiral down into a long war.

Conditionality means that if the political reforms don't move forward, neither does any increase in our aid. Sending additional military advisors or deploying forward air controllers might marginally help the security situation, but the signal it sends to the Shia militias and their political patrons in Tehran is that the Americans don't care about resolving political differences in Baghdad, no matter what our press releases assert. So it makes more sense to condition the dispatch of such additional assistance, or the heavy weapons that Abadi wants, on concrete steps taken by the Baghdad government first. Similarly, indications that American officials support Shia militias without conditions don’t send the tough message needed.

Conditionality is not perfect, but it keeps us from tying ourselves to a sectarian agenda in Iraq, as we did for too long with Maliki. It also gives Iraqis who want to work with us leverage to wage their internal debates. They will argue that if they fail and the Americans quit, then the Iraqis will have no choice but to depend on Iran completely—a perilous move for those who want strong authority in Baghdad.

Second, we must foster accountability. As we equip and train a new Iraqi Security Force, we need to do something we didn't do enough of before: insist upon accountability in the ISF leadership for instances of abuse, mismanagement and sectarianism. Abadi has fired dozens of crooked and incompetent senior officers. We must help him. But changing a military culture is not easy, and it will take time. The Iraqi government’s removing of egregiously abusive and corrupt officials will give Sunni Arabs a sense that change is possible and undercut ISIS’ recruitment efforts.

A strategy rooted in conditionality and accountability will be hard to implement, but it is the best shot we have to empower those in Iraq whom we want to succeed. Perhaps toughest of all, this strategy requires a degree of patience that our Iraq policy has lacked for many years.

It also demands fortitude. If the Iraqis meet our conditions and hold themselves accountable, we must be prepared to help them for the long haul. And if they fail—as Maliki did before—then we must be willing to walk away.

The past twenty-five years have taught us that U.S. policy needs to be about more than the arithmetic of troops and targets. American military operations facilitate securing a stable Iraq, but they can't replace the essential political strategy.

Derek Chollet is Counselor at the German Marshall Fund of the United States and served the Obama Administration at the State Department, White House and Pentagon, most recently as Assistant Secretary of Defense for International Security Affairs. Robert Ford is a Senior Fellow at the Middle East Institute and served as U.S. Ambassador to Syria and Algeria and held senior positions in the U.S. Embassy in Iraq for nearly five years.