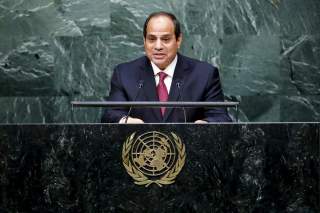 A couple of days after the ouster of President Mubarak of Egypt in February 2011 I published an article on the Foreign Policy website under the title “The Tyrant is Dead, Long Live the Military.” I argued in that article that Mubarak’s overthrow was carefully choreographed by the military high command because he had lost his utility for the military top brass. In fact, as the public face of the authoritarian regime he had become a major liability because of the repressiveness, nepotism, and corruption associated with him and his kith and kin. This had begun to detract heavily from the legitimacy of the regime. Mubarak’s attempt to promote as his successor his son Gamal, who had no military experience whatsoever, was the last straw that broke the military’s back.

In light of these facts, I had also predicted that the fall of the dictator did not mean the end of the power structure over which he presided and that the military, which continued to hold most of the levers of power, was likely to return to power openly sooner rather than later. This came true in July 2013 when his own defense minister, Gen. Abdel Fattah el-Sisi, overthrew Egypt’s elected President Mohamed Morsi. In April 2015 Morsi was sentenced to death by Egypt’s docile judiciary but the sentence is yet to be carried out. Meanwhile, in a manifestly rigged vote, Sisi got himself elected president by a vote of 97 percent in May 2014.

It was announced last week that General Sisi has won re-election to the presidency by 92 percent of the votes. Egypt has now come full circle with Mubarak’s regime replaced by its twin in large part due to a carefully laid out plan by the military top brass. The coup had been in the making from the time the popular demonstrations against Mubarak began in early 2011. In order to bolster their legitimacy, the military top brass first let loose the police and Mubarak’s ruffians on the protesters in Tahrir Square and then ordered the army to intervene to protect the demonstrators, thus posing as well-wishers of the protestors.

Morsi and his party, the Muslim Brotherhood, also contributed to their downfall. They were unwilling to coopt the liberals and the large anti-Mubarak constituency in the country in part due to their ideological rigidity and in part because they saw the secular and liberal forces as their primary competitors in the newly established democratic order. This allowed the military to exploit simmering anti-Morsi sentiments among broad elements of the amorphous public for its own ends. Anti-Morsi demonstrations in June–July 2013, encouraged and clandestinely organized by the military, were used as the justification for Sisi’s decision to remove and arrest Egypt’s first elected president.

Morsi compounded his error of sidelining, indeed antagonizing, the secular and liberal elements by attempting to co-opt the military top brass and holdovers from Mubarak’s regime by appointing them to sensitive cabinet positions that left them in control of most of the instruments of repression at the state’s command. He inducted General Sisi, who had been director of military intelligence under Mubarak and partner in Mubarak’s crimes against the Egyptian people, into the cabinet as defense minister.

Morsi also appointed holdovers from the Mubarak regime to head the Ministry of the Interior, which controlled the police and security services. He first appointed Police General Ahmed Gamal El Din, who had been deputy interior minister under Mubarak, as interior minister. In January 2013 he replaced Gamal with Mohamed Ibrahim Moustafa, who had also been an assistant minister of interior under Mubarak.

These appointments, designed to appease forces of the old regime and mitigate their opposition to the new dispensation, were responsible for Morsi’s overthrow more than anything else. With these choices he handed power over the state’s instruments of control and repression to holdovers from the Mubarak regime that were bent on undermining his authority.

General Sisi, ostensibly loyal to Morsi, consolidated his power within the military and overthrew the elected president in July 2013. Ibrahim, in control of the police, refused to provide protection to the offices of the president’s party when they were under attack in June and July 2013 by anti-Morsi mobs clandestinely egged on by the military. No wonder General Sisi retained him as interior minister after Morsi’s overthrow.

President Sisi has been able to sell himself to the United States as a staunch ally against Islamist extremism, especially the Islamic State, and as guarantor of Egypt’s peaceful relations with Israel. Morsi was looked upon with suspicion in Washington because Hamas in power in Gaza was historically an offshoot of his party the Muslim Brotherhood. This suspicion toward Morsi continued despite the latter’s best efforts to demonstrate that he was interested in peace between Israel and Hamas by brokering a ceasefire November 2012 between the two antagonists that prevented a full-scale invasion of Gaza by Israel. He was praised for his efforts in this regard by then U.S. Secretary of State Hillary Clinton.

Sisi’s antagonism toward the Islamic State stems from his feud with the Muslim Brotherhood who he considers to be Islamist extremists similar to the Islamic State. In reality, his brutal suppression of the brotherhood, which was in the process of evolving into a constitutionalist Islamist party, similar to an-Nahda in Tunisia and the AKP in Turkey, has reopened the floodgates of Islamist extremism in Egypt and a return to the 1990s-like situation when terrorist attacks had become the order of the day in Egypt. The moderate elements in the brotherhood have lost out to those who advocate the violent overthrow of the regime once propagated by the Islamist thinker and brotherhood ideologue Syed Qutb in the 1960s. This has encouraged elements within the brotherhood from taking up guns against the regime, thus turning Sisi’s assertion into a self-fulfilling prophecy.

General Sisi’s inability to fully assert control over the thinly populated Sinai Peninsula where the Sinai Province, an affiliate of the Islamic State, established in 2011 has become increasingly active in the past few years. It has conducted a number of deadly attacks in the region, including the shooting down of a Russian plane killing 224 people. Its most recent dramatic act of terror was the attack on a mosque in the town of Bir al-Abed in November 2017 that left 235 dead. It seems that most of those targeted were sufi worshippers who the Islamic State considers to be beyond the pale of Islam. It is clear that the Sisi regime is unable to provide security to the people of the Sinai Peninsula, thus further detracting from its legitimacy.

The United States, especially under President Trump, has put all its eggs in General Sisi’s basket. The United States provides $1.3 billion in military aid to Egypt every year and Trump has heaped lavish praise on Sisi more than once since he has come to power. To say the least, this is a very risky policy given the fact that the Egyptian regime suffers from a huge legitimacy deficit. The fate of the Shah of Iran should act as a strong warning signal to policymakers in Washington as the parallels between the two regimes and those in opposition to them are startlingly strong.