Can America Afford to Take Care of Its Veterans? 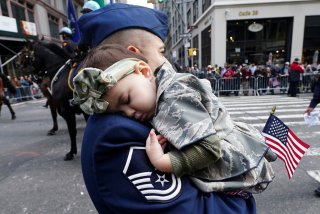 In taking over the Department of Veterans Affairs (VA), Secretary Denis McDonough, only the second non-veteran and the second person not confirmed unanimously by the U.S. Senate, faced a series of unprecedented challenges in providing for the needs of the 19 million living veterans. The most critical of these can be placed into six categories: the rapidly increasing size of the department’s budget, the dramatic expansion of the number of veterans eligible for disability benefits, providing benefits for those LGBT personnel with less than honorable discharges, the backlog of compensation exams, the high suicide rate among veterans, and GI bill benefits.

But this request does not fully reflect what the country will spend for veterans in FY2021 and FY2022. The Biden administration is also requesting another $18 billion for VA hospital upgrades, as part of its sweeping infrastructure plan, which President Joe Biden signed into law on November 15, 2021, and has already approved another $17 billion for VA programs as part of its Covid-19 pandemic relief plan. Since Congress has approved both these items, it will mean that the FY2022 VA budget will exceed $300 billion, which is more than the total defense budget of our geostrategic competitor, China.

The rapidly increasing size of the VA’s annual budget has troubled some lawmakers. For example, Representative Mike Bost (R-IL), the ranking member of the House Veteran Affairs Committee, has argued that this growth is not in line with demand. He correctly points out that the number of veterans has steadily declined over the last decade and that the number of veterans using the VA has not increased by the same size as the VA budget.

Bost and every other GOP member of the committee wrote a letter to the full House Budget Committee expressing concern over the budget’s current size. They argued that unless altered, the VA’s budget will reach about $500 billion by the end of this decade and that the long-term trajectory and cost of benefit obligations demand better planning and budgeting.

Secretary McDonough has defended the increased benefits arguing that the additional money is needed to permit the VA to deliver high-quality health care and benefits to our veterans at a time when they need it most. Further, the administration has argued that more veterans could become eligible for benefits in the future, even years after they leave the service, if the department continues adding to the list of toxic exposure issues, from Agent Orange and burn pits, representing a significant and increasing budgetary outlay.

While Congress did not pass the FY2022 budget before the start of the fiscal year, the Appropriations Committee did endorse the large increase in the base budget.

While Democrats on the committee noted the increasingly high costs of the total VA budget, they agreed with McDonough that these increased funds are necessary to respond to the needs of the more than 9 million veterans currently receiving care or benefits. But they and the Biden administration did not explain how the country will pay for these dramatic increases. With a defense budget for FY2022 of nearly $800 billion, and a VA budget of at least $300 billion, it will mean that the total cost of providing for those who continue to serve and have served this nation will be about $1.1 trillion a year and more than $11 trillion for the rest of this decade.

Obviously, people who serve in the military and are physically wounded during their time in service, like the approximately 45,000 who have been wounded in the wars in Iraq and Afghanistan, can receive veterans’ benefits and medical care at VA facilities or private facilities paid for by the VA. The real issue for the country is deciding whether servicewomen and men, who develop physical and mental illnesses, like depression or post-traumatic stress disorder, after leaving the service should receive the same benefits, thus adding to the 4.6 million veterans already receiving disability benefits.

Coming into office, McDonough had to decide whether the VA would give increasing benefits to two major categories: Vietnam Veterans, on and offshore, who may have been impacted by Agent Orange, and veterans of the wars in the Middle East since 1990 to the present who have contracted diseases that may be a result of having been exposed to toxic smoke from burn pits during their time in those war zones.

In addition to deciding whether to give more of these veterans access to free medical care, McDonough will also have to decide what diseases the VA will cover that could have resulted from the two situations and how long a period, after being exposed to these two horrible situations, which diseases will be covered.

At the current time, the VA grants benefits to some 3 million Vietnam Veterans for seventeen diseases related to Agent Orange, the widespread chemical defoliant irresponsibly used during that war, which has and continues to sicken hundreds of thousands of veterans of that conflict. Three conditions were added to the list last December in the FY2021 National Defense Authorization Act (NDAA) and went into effect in June of this year. They are bladder cancer, hypothyroidism, and Parkinson’s. Adding these diseases potentially adds another 52,000 veterans and another 6,000 family members of deceased veterans to the lists of those who can receive benefits from their exposure to Agent Orange.

The VA estimates that, over the past thirty years, some 3.5 million brave men and women have been exposed to toxic smoke from the irresponsible use of burn pits during their deployments to two major areas. First, the Southwest Asia theater of operations, which includes Iraq, Saudi Arabia, Bahrain, Qatar, the UAE, Oman, the Gulfs of Aden and Oman, the Persian Gulf, the Arabian and Red Seas, and the airspace above these locations. Second, Afghanistan, Uzbekistan, and Djibouti from September 19, 2001, to the present. About 250,000 men and women who served in these two areas have already signed up for the VA’s airborne hazards and open burn pit registry, designed to track illnesses related to burn pit exposure, to gain access to veteran’s benefits.

Individuals who already suffer from three illnesses, asthma, rhinitis, sinusitis, which manifest within ten years of their service in these areas already can apply to receive presumptive disability benefits. However, almost half of those who apply as a result of having contracted one of these three illnesses are rejected.

At the present time, the presumptive benefit status does not apply to many of the other respiratory illnesses that members of veterans’ groups have said have occurred in alarmingly high rates among veterans exposed to the burn pits. The administration and Congress are considering adding between eleven and twenty-three more respiratory illnesses and lung cancers to the VA’s presumptive list. Doing so will make at least another 100,000 women and men eligible for VA benefits.

In deciding whether to give more veterans disability benefits, the VA must be aware that since 2001 the number of veterans receiving disability benefits has already grown from 2.3 million to 4.8 million and led to an increase in cost from $20 billion a year to $292 billion.

On September 20, 2021, McDonough announced that tens of thousands of LGBT veterans, forced from the military only because of their sexual orientation and given other than honorable discharges, will be able to receive full veterans benefits despite their dismissal status. Some advocates for this change estimate that, over the past seventy years, nearly 100,000 women and men may have been involuntarily separated based on their sexual orientation. This change comes on the tenth anniversary of the repeal of the “don’t ask, don’t tell” law which alone forced about 14,000 brave service members to be discharged for simply divulging their sexual orientation. This new policy, which extends medical care, disability benefits, unemployment assistance, and college education—which was previously blocked because of their other than honorable discharges—did not require any legislative action.

In March 2021, there was a backlog of about 350,000 compensations exams, which a veteran must take if he or she is to receive disability benefits. This was three times more than the year before and was partially a result of delays caused by the Covid-19 pandemic. By October of this year, the number had dropped to about 200,000 and the VA hired more than 2,000 new people to assist in reducing the claims backlog. But, it is unlikely to be fixed until late-2022.

Despite increases in the amount that the VA allocates to mental health services and suicide prevention, the suicide rate among veterans has not abated significantly and still is substantially higher than that of the general population. Since 2001, more than 30,000 Global War on Terror veterans have died by suicide. This is more than four times the number who have died in combat. Over the past decade, the VA budget for mental health has grown from about $6 billion to about $11 billion and the amount allocated just to suicide prevention has grown from $68 million to almost $250 million.