Can America Counter the Next China Shock? 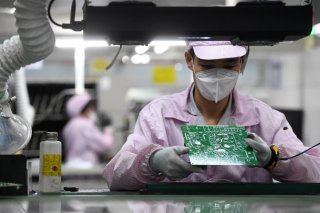 In the early 2000s, a “China Shock” roiled America’s manufacturing economy as companies offshored labor. The United States is now at risk of a second China Shock as American investors offshore capital at record rates.

China Shock 1.0 devastated American manufacturing and enriched Chinese industry. As China’s economy has changed its sectoral composition, migrating from an export economy to one that services its domestic market, China’s economic leaders have changed their strategic objective. No longer do they espouse the benefits of reform and opening; Now, the goal is regulation and self-sufficiency. Changes in China’s economy have paved the way for China Shock 2.0.

Economists call the frictional period of trade integration with China in the first decade of the twenty-first century the “China Shock.” It refers to the severe damage Chinese import competition inflicted on certain sectors of the American economy. David Autor calculates that the China Shock was responsible for the loss of 2.4 million American jobs between 1999 and 2011. In the aftermath, the American workforce adapted more slowly than expected. Labor force participation rates remained unnaturally low and unemployment unnaturally high for the following decade.

What started as an economic problem—job loss—metastasized into feelings of social obsolescence. The challenge proved too daunting for government assistance alone as unemployment insurance failed to remedy the problem. Finally came the political backlash. In 2016, candidate Donald Trump drew on this new fount of protectionism, winning eighty-nine of the 100 counties most affected by Chinese import competition.

China Shock 1.0 was a story of offshoring labor. American and multinational firms shuttered domestic manufacturing hubs in favor of cheaper locations overseas. Furniture, plastics, and agriculture were among the unloved sectors most afflicted. Its impact was felt in rural America, but the seeds of the shock were sown in the markets of Shanghai and Shenzhen.

In 1992, Chinese leader Deng Xiaoping’s “Southern Tour” ignited a flurry of business activity. Deng pointed to the collapse of the Soviet Union and the vitality of the West as justification for “reform and opening up.” Economic modernization “is an irreversible general trend of historical development,” he said. China’s village industrial output grew by a staggering 28 percent per year in the 1990s, and China joined the World Trade Organization in 2001. During the 2000s, China’s so-called “Golden Decade” under President Hu Jintao, Chinese GDP grew fivefold. By decade’s end, the country was the world’s largest manufacturing power and second-largest economy.

So far, the offshoring of American capital has been part inertial, part intentional. Some investors have simply maintained passive positions in index funds whose managers have been adding exposure to the Chinese market. This outflow of dollars is poised to continue. As China cracks down on foreign listings of Chinese companies, investors might be tempted to follow these Chinese stocks, delisted from American exchanges, over to Chinese exchanges. Other investors will continue to devise new joint ventures to access the Chinese financial market or fund new bets on Chinese technology—both areas of record inflows.

Offshoring American capital is a precarious bet for shareholders and a geopolitical loss for policymakers.

Investors are failing to appreciate the magnitude of risk that stems from Xi Jinping’s ideological grip on Chinese capital markets. China’s mammoth domestic market and the stubbornly persistent inflows of foreign direct investment have given Xi the confidence to ignite a regulatory crackdown. Since November, Chinese regulators have taken more than fifty actions spanning anti-monopoly, real estate, finance, and education—more than one move a week, the Wall Street Journal notes. Titans like Jack Ma’s Ant Group, ride-share app DiDi, and web giant Tencent have all fallen victim.

This decision to regulate is not an economic imperative as much as a political one. In a January speech to the Central Party School in Beijing, Xi made it clear that his crackdown on capital markets was an ideological endeavor. Capital markets must prevent “foreign capital from entering and exiting,” he told cadres. Economic self-sufficiency must be the goal. “The barbaric growth of capital” must be halted at all costs. Last week, China’s State Council reinforced Xi’s guidance, releasing an “implementation outline” with thirty-five instructions. The document makes it clear that regulation is the country’s economic priority for the next five years. These regulatory objectives have policy aims only in a political sense. The goal is not market efficiency or macroeconomic maneuvering to manage the Mundellian trilemma. Politics is the end goal, regulation the rationale.

While the arsenal of American tools to counter China in geopolitical competition is extensive, the U.S. government’s present approach struggles to manage the consequences of offshoring an essential factor of production.

Currently, investment blacklists, decreed by executive order, are the most wide-ranging tool. In November 2020, the Trump administration blacklisted American investment in companies associated with China’s military and state security. In June, President Joe Biden expanded the blacklist to encompass companies linked to human rights abuses. The Bureau of Industry and Security, housed within the Commerce Department, maintains the administration’s Entity List, which recently placed restrictions on thirty-four new Chinese companies; investment in these firms requires onerous licensing. The Treasury Department recently expanded the scope of its Committee on Foreign Investments in the United States investment review for inbound technology investment. Across a variety of agencies, the tools to control American capital outflow are being stretched to their breaking point. Moreover, despite these many tools, the government still lacks a centralized repository of investment screening criteria.

Deploying a comprehensive, centralized regulatory instrument to monitor and temper this outbound investment could help ward off China Shock 2.0. In a speech in July, National Security Advisor Jake Sullivan floated a new investment screening regime that is “postured for intense technology competition.” His focus is on “the impact of outbound U.S. investment flows” that could “enhance the technological capacity of our competitors in ways that harm our national security.” “Quieter initiatives” on investment screening will “pick up the pace in the months ahead,” he concluded.

It is clear that the Biden administration is considering broader efforts to regulate outbound American investment. Perhaps, they have internalized the lesson of China Shock 1.0, when government intervention was too little and too late. To counter Xi’s assault on Chinese capital markets, and by extension American shareholders and American national interest, it would be wise for American regulatory action to be as deep and systemic as the changes the Chinese economy has experienced under Xi.