Can America Deter the Regime Survival Ambitions of a Nuclear-Capable North Korea? 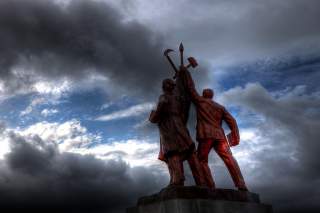 The first real test of President Trump’s approach to foreign policy is likely to be on the Korean Peninsula. In January, even before Trump took office, Kim Jong-un declared that North Korea was at “the final stage in preparations to test launch an intercontinental ballistic rocket”—possibly one that could reach the West Coast of the United States. Then president-elect Trump responded via Twitter: “North Korea just stated that it is in the final stages of developing a nuclear weapon capable of reaching parts of the U.S. It won't happen!”

One month later, in a seeming act of defiance, North Korea test fired a Pukgukson-2 medium-range missile over the Sea of Japan. And in early March, it launched four ballistic missiles simultaneously—believed to be extended-range versions of the ubiquitous Soviet Scud design—into the Sea of Japan.

Although it had been previously planned and announced during the Obama administration, the missile launchers and other equipment needed for the United States to set up a Terminal High Altitude Area Defense (THAAD) battery arrived in South Korea the day after North Korea test launched its four ballistic missiles. Also, the White House is currently conducting a review to explore various options to confront North Korea’s nuclear and long-range missile ambitions—ranging from sanctions to preemptive military strikes to regime change.

So what should the Trump administration do?

Technically, North Korea is considered a nuclear-capable country because it has conducted several nuclear bomb tests. However, it has not been verified—and many experts are skeptical—that the DPRK has been able to develop an actual nuclear warhead that can fit the payload constraints of a missile, which is easier said than done. Moreover, North Korea does not have the long-range intercontinental ballistic missile capability to reach the United States. So if threat is defined as a combination of intentions and capabilities, North Korea is lacking in the latter.

It is also important to understand Kim Jong-un’s motivations. We assume he wants to directly challenge and threaten the United States—even take military action against us. But it is just as—if not more—likely what Kim Jong-un wants is something else: to secure his own survival and that of his regime, much like his father and his father’s father before him. That would certainly explain the executions and assassinations of those who might usurp him, which include family members. Having nuclear weapons would seem to be an effective deterrent against regime change. After all, other dictatorial leaders who gave up their weapons programs—such as Iraq’s Saddam Hussein and Libya’s Muammar el-Qaddafi—paid a high price for those decisions.

But isn’t Kim Jong-un an unpredictable—even crazy—leader who can’t be deterred? The same was said of Stalin and Mao in their time, yet both those leaders were deterred. Moreover, Kim Jong-un would have to be suicidal to launch a nuclear weapon against the United States since the United States has the ability to retaliate with utter devastation.

This means the Trump administration actually has room to explore options short of military action and the apparent red line of “It won’t happen!”

As a candidate, President Trump said, “China should solve that [North Korea] problem and we should put pressure on China to solve the problem.” There’s certainly merit to that approach. After all, China is North Korea’s most important ally, biggest trading partner and main source of food, arms and energy. If any country has leverage to exert over the regime in Pyongyang, it is China. China’s foreign minister Wang Yi’s indicated that China might be willing to play a role in his remarks at a Beijing press conference in the wake of North Korea’s missile test. “Nuclear weapons will not bring security,” he said. “The use of force is no solution.”

Indeed, the United States should be encouraging the countries in the region to deal with North Korea—after all, they are the most directly threatened and have the most to lose. Specifically, both South Korea and Japan need to step up to the plate and not rely on the United States to underwrite their security. Both are wealthy countries compared to the impoverished DPRK. Their combined economies are more than one hundred times larger than North Korea’s, which means that they have greater capacity to spend more on defense, if needed. So, for example, rather than the U.S. THAAD deployment being gratis, South Korea could pay for it.

However, the use of military force against another nuclear-armed country is a high-risk proposition—maybe not for the United States but certainly to South Korea and Japan, which are within range of North Korea’s missiles and would be the likely targets of North Korean retaliation.

The reality is that the nuclear genie is out of the bottle in North Korea and is not likely to be put back. But if we want to prevent future genies from getting out of the bottle, then we must reexamine our policies, which have not prevented North Korea, Pakistan and India from becoming nuclear powers. We must also create incentives for countries, such as Iran, to want to do the same. We should start with reexamining regime change in countries that do not represent a direct or imminent threat to the United States.

Charles V. Peña is a senior fellow with Defense Priorities. He has more than twenty-five years of experience as a policy and program analyst and senior manager, supporting both the Department of Defense and Department of Homeland Security. Peña is the former director of defense-policy studies at the Cato Institute and author of Winning the Un-War: A New Strategy for the War on Terrorism. You can follow him on Twitter @gofastchuck.