Can America Prevent a Chinese Invasion of Taiwan? 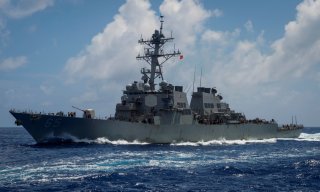 McKinney and Harris’ final point is if Taiwan is “refusing to contemplate threatening targeted economic self-harm ... [it will] telegraph to Beijing and the rest of the world a dangerous unwillingness to take risks in pursuit of self-defense.” However, it should be remembered that whether the signal is costly does not naturally make it effective. It must always take an effective measure first and then make it costly. As General George S. Patton reminded us, “no bastard ever won a war by dying for his country. He won it by making the other poor dumb bastard die for his country.” By that wisdom, the element of destroying TSMC in the Broken Nest strategy is questionable in its effectiveness; hence, an act of self-harm signals desperation, according to McKinney and Harris, but it has no causal effect on enhancing Taiwan’s self-defense.

Nonetheless, Taiwan should certainly be determined to defend itself regardless of how much support the island nation will get from the United States and its allies and partners; however, the United States should not subscribe itself to any kind of timeless assumptions. Biden’s recent remarks in Japan signify American willingness to engage with the changing economic and security dynamics in the Indo-Pacific region without self-constraint by ideological divisions and political ideologies prevailing in U.S. national politics.

Although it is possible to “imagine” a Broken Nest strategy, we must be careful about making assumptions to frame a solution, especially in a volatile geopolitical and geo-economic environment. The application of evolving lessons learned from the Russian invasion of Ukraine and the unintended consequences that followed—like the human cost, the refugee issue, and the global impact—might be a better way to rethink the gamut of developing a deterrence strategy against a possible Chinese invasion of Taiwan.

Dr. Hon-Min Yau is an associate professor of strategy and international affairs as well as the director of the Graduate Institute of International Security at the National Defense University in Taiwan. Their views expressed in this analysis neither represent the official positions of the current or past affiliation of their institutions nor their respective governments.