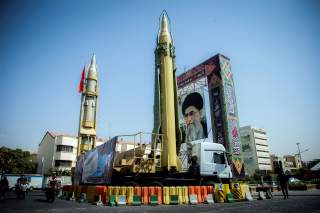 Ahead of his visit to the United States, Saudi crown prince Mohammad bin Salman (MbS) clarified in an interview that while his country does not want nuclear weapons, “without a doubt, if Iran developed a nuclear bomb, we will follow suit as soon as possible.” Such a clear and public statement by the de facto leader of Saudi Arabia was obviously meant to grab attention. This is not exactly breaking news for anyone that has been following Saudi Arabia in recent years, but the reiteration of Saudi concern with Iran’s nuclear ambitions is significant for two reasons. First, the Iran nuclear deal (JCPOA)—which Saudi Arabia has long believed is a flawed and will not stop Tehran from becoming a nuclear state—enables Iran to have an industrial nuclear program including uranium enrichment. Second, the statement reinforces the notion that Saudi Arabia’s demand to enrich uranium as part of a civilian nuclear deal with the United States is not detached from the kingdom’s desire to keep its options open in the military realm as well. In both regards, the factor that is driving Saudi Arabia's statements and stepped up nuclear plans is the implications of Iran’s nuclear program, and the deal that was concluded with Iran in 2015.

While some have suggested that the crown prince’s message highlights the importance of keeping the JCPOA in place as insurance that Iran will remain non-nuclear, the Saudi concern is quite the opposite: namely, that the nuclear deal in its current format has created a more aggressive Iran, and will not ensure that Iran remains non-nuclear. At the Munich Security conference in February, Saudi foreign minister Adel Al-Jubeir could not have been clearer about how his country views the JCPOA, and Iran’s regional behavior:

We are letting [the Europeans] know that the nuclear agreement that was signed with Iran is lacking. The sunset provision has to be amended, and the inspections have to broadened to include non-declared and military sites. We also believe the nuclear agreement itself does not resolve the issue of Iran's radical behaviour which has to do with the ballistic missile resolutions of the United Nations, exporting ballistic missiles that are used to target civilians.

He went on to criticize Iran's support for terrorism, and the revolutionary guards who are causing "mischief" within the region and the world.

The recent Saudi messages are directed at the Trump administration’s current efforts to garner European support to strengthen the JCPOA. This explains the foreign minister noting that Saudi Arabia's assessment of the deal and Iran's regional behavior has been relayed to the Europeans, who have so far not been forthcoming on improving the JCPOA. Riyadh is clear that if the JCPOA is not strengthened and Iran does goes nuclear, Saudi Arabia will be right behind Iran.

All of this comes on the heels of Saudi plans for a civilian nuclear program, including a demand to work on the fuel cycle—namely, uranium enrichment and reprocessing of plutonium. Discussions about Saudi Arabia’s desire to close deals for a civilian nuclear program have accelerated in recent weeks, and negotiations with the United States on the subject have been renewed. During the Obama administration, the president insisted on holding Saudi Arabia to the "gold standard" that it set for civilian nuclear cooperation, namely, that the state in question must renounce the right to work on the fuel cycle—due to the potential proliferation dangers.

The background to the question of a state's supposed right to work on the fuel cycle is set by the Non-Proliferation Treaty (NPT). According to one interpretation of Article IV, the NPT grants states the right not only to cooperate on developing a civilian nuclear program, but broadens that right to include independent production of fuel for its reactors (rather than buying the fuel on the open market). It became clear that this broad interpretation was not to be encouraged because uranium enrichment is dual-use technology—it can produce fuel for reactors, but if uranium is enriched to very high levels, the same centrifuges can produce the fissile material needed for a nuclear bomb. This was the rationale for creating the gold standard, and the first state in which it was implemented was the United Arab Emirates in 2009.

Does Saudi Arabia need an advanced nuclear program for civilian purposes? The kingdom claims that it needs nuclear energy to answer its growing energy needs, to reduce its dependence on oil and free up oil for exports. But Saudi Arabia has not hidden its additional strategic calculations towards Iran. Several years ago, so as not to fall behind Iran, Saudi Arabia announced its intent to build sixteen nuclear reactors over the next twenty years. Riyadh has received offers from the United States, China, Russia, France and South Korea for building the first two reactors. While insisting that the program is for peaceful purposes only, the Saudi demand to enrich uranium is a serious concern.

However, when the global powers negotiating the JCPOA agreed to legitimize Iran's uranium enrichment program, the gold standard for civilian nuclear programs was dangerously undermined. After years of sanctioning Iran's uranium-enrichment activities—and well-aware of the dangers of this dual-use technology—the Obama administration nevertheless conceded to Iranian demands to treat it like any "normal" member of the NPT, and grant it its "rights," including uranium enrichment. After doing so, it is difficult to justify why Saudi Arabia cannot do the same; especially when the legitimacy was granted to a NPT violator, whereas Saudi Arabia is a member in good standing of the treaty.

At the end of the day, Saudi Arabia would probably be happier not to go down the nuclear route. The key to getting Riyadh to adhere to the gold standard for civilian nuclear programs, and more importantly, to back off from any ideas about becoming a nuclear state, is to ensure that Iran cannot acquire nuclear weapons. And the first step in that regard is to improve the Iran nuclear deal. The Saudis may be raising the issue to pressure the Europeans, helping to convince key European states that they need to work with the Americans to correct the JCPOA’s most blatant flaws.

Meanwhile, in considering the Saudi bid, the United States needs to juggle additional considerations. First, if an agreement is not reached—and Saudi Arabia decides to cooperate with Russia or China on its civilian nuclear plans—Moscow and Beijing could agree to more lax nonproliferation standards, and the United States would lose any control over how the program proceeds. As such, Washington has a clear interest in being the one to make the deal. As a member of the NPT, Saudi Arabia cannot simply start developing nuclear weapons. Riyadh would be under the same restrictions as any other NPT member state that decided to violate the terms of the treaty, like Iran. But the United States must insist on some additional guarantees for a civilian nuclear deal: adherence of Saudi Arabia to the additional protocol; full U.S. involvement in the program, including veto power over each step, on a case by case basis; and Saudi agreement to send the spent fuel from the nuclear reactors abroad.

The best route going forward is not to tie Saudi Arabia's civilian program to problematic JCPOA conditions and timelines (as some have proposed), but rather to strengthen or fix the JCPOA itself. The flaws in the JCPOA—and enhanced Iranian regional aggression following conclusion of the deal—is what is driving Saudi Arabia to go down the same route. The only way to reassure Riyadh is to directly address the kingdom's concerns that the nuclear deal has increased Iran's hegemonic ambitions while not ending its ability to become a nuclear state.