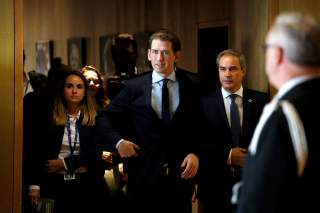 Fears about a hard-right turn in Austria following its parliamentary election this past weekend need to be put in perspective. The populist, anti-immigration, Russia-friendly Freedom Party of Austria (FPÖ)—founded in the 1950s by ex-SS officers—came third, with fewer seats than in the 1999 election.

Like back then, FPÖ will likely be a junior partner in a coalition government of Sebastian Kurz, the thirty-one-year old leader of the center-right People’s Party (ÖVP). Eighteen years ago, the presence of a far-right party in government prompted other European countries to form a ‘cordon sanitaire’ and impose diplomatic sanctions on Austria. While such measures are not coming back, the emerging government will raise a different set of challenges for those who are hoping for deeper reforms to the EU, especially in the area of asylum and border protection.

Austria has played an important role in the refugee crisis, which broke in earnest in 2015. It served as a transit country for refugees and migrants heading to Germany on the so-called Western Balkans Route—which has now largely come to a standstill thanks to the EU-Turkey deal—but also as a destination country in its own right. In the twelve months since July 2016 alone, over twenty-nine thousand asylum applicants were filed in Austria, one of the highest numbers on per-capita basis in the EU.

In a break with ÖVP’s reputation as a bland middle-of-the-road party, Mr. Kurz’s electoral success was driven partly by his ability to offer, like Emmanuel Macron in France, a promise of political renewal. More importantly, he succeeded in capturing a large part of FPÖ’s electorate by taking a hard line against immigration from Muslim-majority countries. A law that he proposed, which was adopted last year, bans full-face veiling in Austria. During the election campaign, Mr. Kurz also promised cuts to benefits available to refugees, threatened to impose sanctions against the home countries of asylum seekers, and suggested creating “hot spots” outside of the EU where prospective asylum seekers would be detained as their applications are being processed.

As a result, one can expect the new Austrian government to be receptive to efforts to beef up Europe’s external border service, Frontex, which now relies solely on tools that member states voluntarily make available to it. Starting in 2014, the Italian government ran a substantial policing and rescue operation, “Mare Nostrum,” in the Mediterranean Sea. Since then, such activities have been downsized, inviting smugglers and leading to more deaths on the way. The problem illustrates a key flaw of the Schengen Area: the combination of free, passportless travel and a decentralized system of border protection and asylum policy.

While Mr. Kurz’s election might facilitate further investment into common European border protection capabilities—a largely uncontroversial matter—it is unlikely to lead to a compromise over the EU’s asylum policy. What made the refugee crisis of 2015 so severe was the fact that, under the existing EU rules, countries that happen to be at the bloc’s external border are supposed to carry the burden of registering, processing and accommodating incoming asylum seekers. With hundreds of thousands arriving on Greece’s shores, for instance, that became unsustainable, particularly as refugees and migrants sought better prospects in wealthier European countries, which also offered higher chances of successfully obtaining asylum.

Recall that to relieve pressure and discourage chaotic secondary migration, in the summer of 2015 the European Commission devised the ill-fated system of relocation quotas, which aimed to spread the burden of registering and accommodating asylum seekers, and processing their applications, more evenly across member states. Although adopted by a qualified majority, the quotas were adamantly rejected by a number of Central European countries, most notably Poland and Hungary. Since then, the debate over asylum policy has been in a deadlock between the Willkommenskultur championed by Germany and the refusal to consider a single asylum application, an attitude prevalent across Central Europe.

Regardless of how generous one thinks the EU’s asylum policy should be, the absence of a coherent EU-wide approach large migratory waves will lead to chaos, as in 2015. Because of its geography, Europe does not have the option of sealing itself off completely from external migration, especially across the Mediterranean—no matter how well-resourced Frontex might be.

The only way to strengthen the EU’s resilience to future refugee and migratory crises is through a political bargain that would reconcile the humanitarian obligations of some of the world’s wealthiest democracies with the urge of Europe’s nation-states to be in control of their immigration policies. Such a bargain might involve a new legal form of refugee protection, short of the full rights and open-ended nature of asylum, as well more flexible forms of refugee relocation across the EU. If Mr. Kurz proves to be as effective a dealmaker as he is a political campaigner, maybe such a compromise is not that far off.

Dalibor Rohac is a research fellow at the American Enterprise Institute in Washington DC. Twitter: @DaliborRohac.