Can Bernie Sanders Steal Trump’s Base? 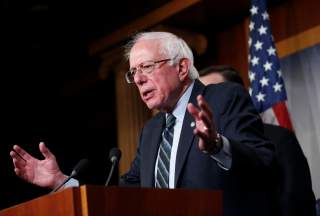 On Tuesday, 2016 Democratic runner-up Bernie Sanders announced his second campaign for president of the United States. In the span of four years, the seventy-seven-year-old Vermont senator has turned pet issues like Medicare-For-All, tuition-free college, and rejection of Super PAC money into Democratic Party staples endorsed by almost all the declared 2020 candidates. A self-described socialist since his college days in the 1960s, Sanders has single-handedly brought mainstream respectability to the term “democratic socialism” in the United States. Early polling puts him near the lead for the nomination, and in the first dozen hours of his announcement he raised more than twice as much money as his nearest competitor in half the time.

President Donald Trump welcomed his fellow New York native. Speaking to a press junket in the Oval Office, he said, “Personally, I think he missed his time, but I like Bernie because he is one person that, you know on trade, he sort of would agree on trade. I’m being very tough on trade, he was tough on trade. . . . He ran great four years ago, and he was not treated with respect by Clinton. And that was too bad. I thought what happened to Bernie Sanders four years ago was quite sad as it pertains to our country.”

Daniel McCarthy, editor of Modern Age, believes the sentiment to be genuine. “I think he does like Bernie, maybe as his idea of what a Democrat is supposed to be,” he told TNI. McCarthy also believes that Trump views Sanders as a weak opponent in a general election. “I’m sure Trump is confident that nationalism beats socialism in America. If Bernie branded himself as a left-nationalist, conservatives would have more to worry about, but he won’t do that.” Trump ended his comments to reporters with a knowing smile, saying that “You’ve got a lot of people running. But only one person is going to win. I hope you know who that person is.”

For Sanders to be that person, he’d have to win back the midwestern voters whose defection crumbled Hillary Clinton’s “Blue Wall” in Pennsylvania, Wisconsin, and Michigan. “It's economically liberal but socially conservative working-class voters who agree with Sanders (and Trump) on trade, wages, and wars like Iraq,” said Jim Antle, editor of The American Conservative.

What makes Sanders more likely to be successful in winning this constituency than other Democrats like Kamala Harris or Cory Booker? According to Antle, Sanders doesn’t exhibit the same innate hostility to the cultural attitudes of this segment of the country that his compatriots do. “Sanders sees things primarily through the prism of class, not race, and is reliably left-wing on social issues but not really animated by them. He, therefore, doesn't offend white working-class sensibilities as much as other Democrats do while promising more social programs from which they might benefit,” Antle told TNI. You’ll never catch Bernie Sanders calling Middle America “deplorable.”

Could it really be as easy as not hating your electorate? Jeff Taylor, professor of Political Science at Dordt College, believes that the key to a Sanders victory is embracing the issues close to the hearts of Middle Americans. “His anti-corporate, anti-globalization, anti-war positions have populist appeal that is able to transcend the usual divides of party and ideology. This partly explains why a number of Sanders supporters, in 2015, told me that Trump was their second choice, and vice versa.” Agreeing with Antle’s comments, Taylor said that “Opposition to crony capitalism, global empire, and partisan dynasties unites Trump voters and Sanders voters.”

While both his politics and personality may give him a leg up against other liberal Democrats, Taylor echoes McCarthy’s skepticism that Sanders can ultimately win. “Sometimes lightning doesn't strike twice, when it comes to anti-establishment candidates. George Wallace came closest in 1972 to the Democratic nomination. In 1976, his campaign fizzled after losing to Carter in Florida. On the other hand, Pat Buchanan built on his 1992 showing in the GOP primaries to start very strong out of the gate (but too much opposition from neocons and party establishment to actually win).”

In an election year with a wide bench of diverse, first-time presidential candidates who’ve coopted his platform, can Bernie Sanders outdo his 2016 performance? The populist-swing voters of Middle America will decide.