Can Biden Make a Comeback? 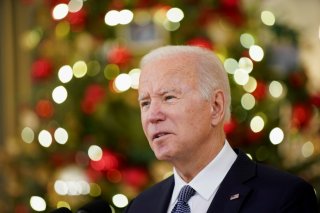 It was a weary Joe Biden who addressed the White House press corps on Friday. “It’s just a cold,” he declared before stating “I’m tested every day, a Covid test.” It was his toddler grandson who had kissed and infected him.

Biden needs all the love he can get because he isn’t getting much even from Democrats who are eyeing an impending mid-term electoral catastrophe. Poor Joe. The bad news keeps mounting. One day it’s the announcement of a new Coronavirus variant. Another it’s that gangs continue to rob and loot designer stores. Or it’s that job growth was slow in November and inflation continues to rise, prompting the Federal Reserve to weigh raising interest rates. Meanwhile, in foreign policy, both Russian president Vladimir Putin and Chinese president Xi Jinping are threatening, respectively, Ukraine and Taiwan.

Can Biden hit the comeback trail? Or is his presidency stillborn? Is he the new Jimmy Carter—or even worse?

Biden is hardly the first president to encounter severe difficulties in his first year. John F. Kennedy encountered several disasters, including his Vienna Summit with Nikita Khrushchev who manhandled him and the Bay of Pigs. Ronald Reagan sailed right into a recession. And George W. Bush confronted 9/11.

Biden’s presidency has been an accumulation of setbacks, centered around his inability to master the pandemic. His defenders point to the refractory nature of the red states, arguing that Republican politicians are deliberately priming him for failure by blaming him, on the one hand for the pandemic, and rendering it impossible, on the other, to solve it. When it comes to this crisis, Biden is not fully master of his fate. He will have to hope that the latest measures he has proposed, which focus on strengthening testing, particularly on entry to America from abroad, will allow the pandemic to abate.

His economic fortunes are directly tied to the pandemic. The longer it grinds on, the more it threatens to derail the nascent economic recovery. Exhibit A is job growth. Biden touted the drop in unemployment to 4.2 percent but it’s imperative that the remaining 3.9 million jobs that were lost during the pandemic shutdown are replaced as quickly as possible.

One area where Biden has managed to reverse the rise in oil prices by pledging to release fifty million barrels of oil from the strategic oil reserve in tandem with five allied nations. In addition, OPEC has decided to increase production by 400,000 barrels per day. So far, the price of crude has dropped by about twenty percent.

Another arena where Biden can hope for electoral sustenance is in the infighting among congressional Republicans. Right now, House Republicans are quarreling with each other over Islam and abortion—specifically, Nancy Mace (R-SC) and Marjorie Taylor Greene (R-GA). Greene referred to Mace as the “trash in the GOP conference” and “pro-abort.” This was apparently because Mace supports exceptions for abortions in cases of rape or incest. Mace responded with three emojis symbolizing bat, poop, and a clown. Biden can only hope that House Republicans maintain this high standard of decorum during their public colloquies.

So far, Biden has largely been unable to determine the direction of his presidency. Instead, he has been buffeted by events. It represents a stark contrast with his presidency until the withdrawal from Afghanistan when he seemed to be essentially impervious to Republican attacks. The next year will represent a hinge point for the Biden presidency. If he can put the pandemic in the rearview mirror and revive the economy, his fortunes will improve. Like Reagan, who experienced a recession in his first term, he would weather a rough beginning to emerge triumphant. But if he doesn’t, the Democrats will begin to desert him and his presidency will be in shambles almost before it has even really begun.