Can Biden Prove That Democracy Works? 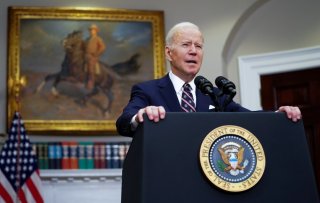 PRESIDENT JOE Biden aspires to be a twenty-first-century Franklin Delano Roosevelt (FDR). Comparisons between the two presidents, once ubiquitous but now sparser, began months before the election when biographers of the thirty-second president heralded Biden as FDR’s heir. Pundits, professors, and presidential advisors swiftly endorsed the analogy. The administration’s failure to usher in sweeping changes, largely owing to Democrats’ razor-thin congressional majority, has dampened the comparison, if not Biden’s own transformational ambitions.

That the parallel was hackneyed and premature did not make it uninformative, though. Spectators confidently compared the two presidents because the moment of Biden’s accession did resemble the moment in which Roosevelt promised to conquer fear with action, want with provision, and political paralysis with functioning democracy.

Each president defeated the incumbent, entering office amid a crisis that so imperiled American lives and confidence that it “put into question the purpose” of America itself, as political scientist Hans J. Morgenthau wrote of the Great Depression’s impact. Accordingly, like FDR set out to get “our own national house in order,” Biden vowed to “build back better.” Like FDR, “healer-in-chief” Biden assumed office hoping to unify a deeply polarized country.

Even Biden’s mission to “prove democracy works” sounded only slightly less daunting than FDR’s self-prescribed mandate to “make democracy work” (and then “prove” it, as FDR was fond of saying). Each wasted little time delivering “action, and action now.”

The similarity of greatest consequence, however, was not that of the presidents’ domestic situations. It was that both witnessed the reemergence of authoritarian competitors abroad. Neither president could ignore that, just as faith in American institutions plunged to new lows, authoritarians abroad boasted governing models that appeared more cohesive, less cumbersome, and often brutally competent.

What observers and the Biden administration have largely forgotten, however, is that Roosevelt did not prove democracy works by providing relief, welfare, and protectionism. Those measures earned FDR favor among beneficiaries, as the political scientists Matthew Baum and Samuel Kernell have shown, but did little to close the class divide. Only once the mid-century war eclipsed the Great Depression as the dominant domestic crisis did the class-based polarization gap narrow.

And yet it would be wrong to attribute this depolarization to a rally around the flag effect. The unity achieved in December 1940, a year before the attack on Pearl Harbor, for instance, owes more to Roosevelt co-opting Republicans during the 1940 presidential campaign than to any international impetus. Roosevelt worked assiduously to set the stage upon which the attack would galvanize the nation.

What proved democracy still worked, cohered Americans, and unleashed the nation’s industrial capacity was totalitarianism: FDR staring it down and preparing America to confront it. Biden has an analogous authoritarian challenge today in the form of China, suggesting he should turn from Dr. New Deal to Dr. Win-the-War for insights. More precisely, Biden should consider how Roosevelt led a weary people to become what we now call the greatest generation.

Though Biden concedes he may be “no FDR,” he recognizes China is “a key test by which historians will judge his presidency” and just how Rooseveltian it was. The good news is, to pass this test, Biden need not be FDR, the charismatic orator and great reformer. He need only be FDR, the negotiator and competitor. Presidential power, as Richard Neustadt observed, is as much about personal influence—Biden’s forte—as it is about public prestige.

ROOSEVELT POSSESSED both power sources in abundance. However, there was a brief period, between 1937–1940, when his popular appeal waned. In this time, the “transformational” Roosevelt played transactional politics to secure policies that did considerably more to unify Americans and contest totalitarianism than his oratory and entitlement programs could.

In 1936, FDR warned of “elements that lead to the tragedy of general war,” elements he would later claim made World War II “unmistakably foreseeable since 1936.” A year later, even the usually prescient Winston Churchill reiterated in his essay “Hitler—Monster or Hero?” that “both possibilities are open at the present moment.” Indeed, Roosevelt stood “almost alone” in recognizing what “Hitler’s coming to power meant,” as one study put it.

Even so, Roosevelt knew his foreign policy remained subject to the vicissitudes of public opinion. He faced his own version of the decades-long, bipartisan agreement to “engage but hedge” revisionist authoritarians, a policy that enabled China’s rise in our time. “Governments, such as ours, cannot swing so far or so quickly,” FDR wrote a friend in fall 1941. Democratic government “can only keep in moving with the thought and will of the great majority of our people.” And the great majority were not yet resigned to war, or Roosevelt’s leadership, in the late 1930s.

After winning reelection in 1936, Roosevelt’s approval rating plunged to 48 percent by 1939 (eight points below Biden’s standing prior to the Afghan withdrawal and still a point below Biden’s term average as of the time of writing). To explain the loss of public confidence in FDR, many point to the Roosevelt recession or the president’s failed attempts to pack the Supreme Court, shove a government-reorganizing “dictator bill” through Congress, and purge his own party of New Deal skeptics. Above all, however, Roosevelt’s standing fell because he set out to awake a nation “pretending that this war is none of our business” to authoritarian competitors who begged to differ.

Still, some contend Roosevelt followed public opinion, earning him a reputation as a trimmer. But FDR’s closest advisors reveal that the first president with access to passable polling statistics consulted them not for policy prescriptions, but to tailor his appeals.

Whether he capitulated to, gingerly nudged, or expertly steered public opinion throughout his career, during the period examined herein, Roosevelt tended to “push opinion forward oratorically, allow its avant-garde to surge past him, follow cautiously in practice, and keep repeating the process,” as Conrad Black put it. Britain’s King George VI put it succinctly, when, shortly before America declared war, he commended FDR for the “way you have led public opinion by allowing it to get ahead of you.”

For the inventor of the “personal presidency,” allowing public opinion to get ahead was not Roosevelt’s instinct. FDR preferred to “refine and enlarge public views” with his rhetoric, even once announcing that (pace the cynical predictions of Madison in Federalist 10) “the day of enlightened administration has come” to superintend competing interests. His decision during this period to lead largely from beneath the bully pulpit bequeathed to him by Woodrow Wilson and Teddy Roosevelt was a response to his diminished popularity following an October 1937 speech.

AGAINST THE backdrop of European rearmament and Japan’s invasion of China, Roosevelt chose Chicago, the heart of isolationism, to propose a “quarantine” of aggressor nations as an alternative to Congress’s neutrality policy. FDR’s speech was “hailed as war mongering … search[ing] ‘under the bed’ for dangers of war which did not exist,” he later recalled. FDR would not overtly try to overturn isolationist sentiment for another eighteen months. “It’s a terrible thing to look over your shoulder when you are trying to lead—and to find no one there,” he confided to an advisor.

Many felt betrayed by the president, who a year before declared “I hate war.” As unemployment again approached 20 percent, most thought the country should build back better at home before turning outward. America could dodge Europe’s next bloodbath by minding its own, western-hemispheric business and best buttress democracy worldwide by modeling its peaceful benefits at home. Others worried Roosevelt’s international outlook would only benefit the war-profiteers he earlier reproached, at the expense of a proto-foreign policy for the middle class. Still others considered the speech a deliberate diversion. Rounding out the isolationist majority were fascist and communist agitators who urged mimicking the dictators.

So wary were Americans of foreign entanglements that Congress considered the Ludlow Amendment, a proposal that would require a public referendum to declare war, during Neutrality Act deliberations each year from 1935 to 1940. Following a Japanese attack on an American gunboat two months after FDR’s quarantine speech, 75 percent of Americans supported the amendment. For fear of losing more public support, Roosevelt refrained from publicly condemning it. Instead, he tipped the close 1938 vote on the amendment by sending a note to House Democrats.

Though the warmaking power was safe from plebiscite, Americans registered their opposition to belligerence in polls. Two months after the Munich Agreement, 95 percent of Americans opposed war. This opposition hardly relented over the next two years. As the German blitzkrieg raced across Europe, non-intervention sentiment intensified.

AS THE precariousness of Europe’s democracies became clearer to Roosevelt, so too did the obstacles posed by Congress’s neutrality laws, which proscribed transfers of U.S. materiel to belligerents. Though he stated the “wholly excellent” embargo provisions should be “clearly and unequivocally enforced” when signing them into law in 1935, he harbored reservations even then.