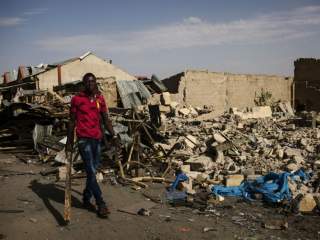 A member of Congress asked me recently whether Americans should be concerned about Boko Haram attacking targets inside the United States. Technically the deadliest terrorist organization in the world last year, the Nigerian group is also notable for using more female suicide bombers than any other other militant group. And it recently marked the one-year anniversary of its declaration of allegiance to the Islamic State. Nevertheless, my immediate answer to the congressional member was no, there is no evidence that the group is capable of extending its reach much beyond Nigeria. But in a context where just a few activated individuals can become a deadly threat to public safety, how do we know what a terror group’s “reach” really is?

An enduring puzzle for counterterrorism analysts is whether to treat Islamist terrorist groups as locally focused adherents to an appealing ideology, or as interdependent nodes in a spreading but centrally directed global network. In other words, is it the case that to fight Al Shabaab is also to fight Al Qaeda Central? Would a successful Islamic State affiliate in Libya meaningfully advance ISIS on the Arabian Peninsula? Alternatively, can some groups, regardless of rhetorical affiliation and occasional communication with others, be safely ignored? Counterterrorism analysts and policymakers need to know whether a group is networked in a way that expands the threat it poses beyond its immediate environs. The division of finite resources, including domestic security measures, intelligence assets, military operational deployments, foreign counterterrorism assistance and countering violent extremism programming depends on how we understand the connections between terrorist groups worldwide. The answers have profound implications about which groups we target, and which groups we live with.

Boko Haram is an excellent case study in this regard. Geographically isolated in an underdeveloped corner of sub-Saharan Africa, over time the group nevertheless has reached out to both Al Qaeda and the Islamic State. As early as 2009, the group expressed an affinity for Al Qaeda, yet remained focused on the Nigerian state and largely expressed that agenda by attacking northeastern Nigerian targets, assassinating military officers and waging war on the police rather than contributing measurably to global jihad. Al Qaeda Central, meanwhile, showed no interest in assuming the role of sponsor or ally, largely leaving Boko Haram to its own devices and to the kindness of regional African affiliates such as Al Qaeda in the Islamic Maghreb or AQIM.

Then, in March of 2015, Boko Haram’s leader, Abubakar Shekau, announced on the group’s Twitter account and through a video released online that it was shifting its allegiance to the Islamic State. ISIS accepted, reportedly taking a more proactive and direct role in the group’s propaganda, if not its operations. Meanwhile, Boko Haram appeared to broaden its connections with groups in the region from AQIM in Mali to ISIS in Libya. Perhaps most importantly, Shekau’s profile, previously the major element of Boko Haram’s brand, began to fade into the background. Whether Shekau was killed by Nigerian forces or was demoted by ISIS, it is curious his disappearance from the scene has not been supplemented with alternative local leadership. Some analysts even suggest Boko Haram has been instructed by al-Baghdadi to subordinate itself to an Emir for the entire West African branch of ISIS, further reducing the group’s autonomy.

Operationally, however, there have been few observable changes to Boko Haram’s playbook. A recent reversion to asymmetric tactics is clearly a consequence of their battlefield defeats by Nigerian and regional troops, and consists of approaches they had used prior to their broad territorial control. The adoption of ISIS-like tactics—the use of clusters of IEDs along transit routes, for example—may be a kind of exploitation of open-source information available to all groups rather than commands taken directly from al-Baghdadi’s inner circle.

Nor has the group seemed to shift its sights away from Nigeria toward other Islamic State locations. Scattered reports of Boko Haram militants appearing in Libya notwithstanding, operatives from Nigeria have not been significant in Europe or the Arabian Peninsula. This may partly be a product of Boko Haram’s domestic focus, and partly a result of the Islamic State’s own modus operandi: whereas Al Qaeda’s target set is more diffuse, the Islamic State aims to establish territorially based caliphates. In caliphate candidate areas, militant travel may be suppressed in order to focus on local fights and governance. Alternatively, al-Baghdadi may differentiate between groups and fighters themselves. Perhaps he does not see as much utility in deploying Nigeria-based fighters abroad, or perhaps the logistical hurdles to relocating sub-Saharan militants are too high for either side.

Does this mean that Boko Haram poses a threat to the U.S. homeland, or that it will in the future? In the guessing game that is counterterrorism forecasting, West Africa seems to be more on the demand than the supply side of global violent extremism—a market for what Al Qaeda, ISIS and others are peddling rather than a source of global terrorist entrepreneurs. If this is the case, then the Western strategic objective should be, initially, to prevent Boko Haram from shifting its sights and capabilities outward. To date, despite its famous “Western education is forbidden” moniker, Boko Haram’s main grievance has been the secularism and corruption of the Nigerian state. Keeping the fight in Nigeria, and about Nigeria, will mean maintaining a Nigerian operational and political lead, with discreet U.S. support in the background. It will also mean a continued effort to cut off communications and resource flows between this local affiliate and its globally prominent benefactors. But to the extent that Boko Haram is Nigeria’s problem, the prudent response is to address it there.

Alice Hunt Friend is an Adjunct Senior Fellow at the Center for a New American Security and a Senior Associate at the Center for Strategic and International Studies. From 2012-2014, she was the Principal Director for African Affairs at the Pentagon.