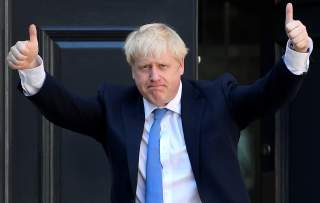 Prime Minister Boris Johnson stands on a shaky, battered political foundation not of his own creation. The tenure of his predecessor, Theresa May, will be remarkable only for its incompetence, unimaginativeness, inability to read public sentiment, and for one thousand, one hundred, and six days of failure to negotiate the United Kingdom’s withdrawal from the European Union.

Recent polling says if able to vote again, 52 percent of Britons would vote to Remain in the EU, while forty-eight percent would vote to Leave, an inverse of the June 2016 referendum. The British economy shrank this financial quarter, the first non-growth period in over six years. This is a demonstration of the uncertainty plaguing the United Kingdom after parliament rejected four separate proposed deals by the May government before her resignation.

The fabled “Brexit” is set to take place on October 31, with or without a negotiated deal. A no-deal Brexit would result in immediate trade restrictions between the United Kingdom and the continent, leading to a disruption in trade.

“If he [Boris Johnson] really wants a no-deal Brexit, his biggest ally is the clock . . . Parliament can say forever, it does not want a no-deal Brexit. But unless there’s a deal, there’s a no-deal,” says Andrew Stuttaford, contributing editor at National Review.

Johnson, who unlike May supported Leave during the referendum, has a reputation as a charismatic but opportunistic politician. Indications from 10 Downing Street are that Johnson’s government is preparing for a no-deal Brexit, realizing the inability to pass a satisfying deal in only three months.

The Conservative Party, in coalition with the Democratic Unionist Party, holds only a one-seat working majority in parliament, a consequence of Theresa Mary’s shellacking in the 2017 general election. While May clung onto power like grim death for another two years, Johnson’s ability to continue in office under the status quo is near impossible. Speculation is now on when the prime minister will inevitably call a snap election.

“The election gamble would obviously be a high stakes move—but Boris and Britain are not in a position where they can lower the stakes,” says Freddy Gray, deputy editor of The Spectator. Boris Johnson was the editor of the same publication from 1999 to 2005. “The more likely scenario is an election straight after October 31st—November 1st. The question at the moment is whether he will even get to the election or will Parliament stop him. It’s white-knuckle stuff—but hey that’s Brexit!”

Gray is referring to rumors that a no-confidence vote will force Johnson from office, and a disparate coalition of Remainers in parliament will act together to prevent a no-deal Brexit. This extraordinary action is highly unlikely, given that the Labour Party has refused to back a compromise candidate for prime minister, and will only stand for its current leader, Jeremy Corbyn.

Michael Gove, who challenged Johnson for party leadership and was subsequently put in charge of no-deal Brexit preparations, has suggested declaring a banking holiday on November 1 to mitigate any subsequent speculative panic. This would close financial markets for twenty-four hours.

“Call me old-fashioned, but the idea of having a general election on the day where people are already saying, I think correctly, that there will be financial turmoil, so they’re going to have an FDR-style bank holiday in order to calm things down, doesn’t strike me as the most obvious election winning background,” Stuttaford told the National Interest.

Stuttaford has little hope that Johnson will be able to clean up the mess left behind by May. “If you have a no-deal Brexit, which I think will be a catastrophe for the Tory [Conservative] Party . . . you will wipe out the conservative MPs in Scotland, who were absolutely critical for the Tories clinging on to their majority in the last election in 2017.”

A theoretical snap election on November 1 would be competitive between four main parties, all with no immodest bases of support: the Conservatives, responsible for finally completing Brexit, even without a deal; Labour, led by old-style democratic socialist Corbyn, who has walked a middle-ground advocating a soft Brexit; the Brexit Party, a single-issue entity now without its single issue; and the Liberal Democrats, the bastion of no-compromise Remainers.

The most unpredictable question is where do supporters of the Brexit Party swing: do they vote Conservative out of gratitude, or do the voters, many of them residing in northern England, return to the Labour Party, whom they’ve supported for decades if not generations?

Meanwhile, do some furious conservative voters in the south of England, a day after seeing a no-deal Brexit they opposed, vote for the Lib Dems out of vindictiveness?

Either way, a general election marked by controversial political gamesmanship, economic fallout, and all-around crisis will be beneficial to the Labour Party, who could return to power after nearly a decade of defeat.