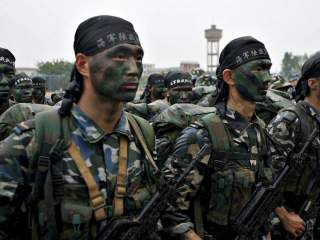 Much has been reported about the recent structural reforms undertaken by China’s People’s Liberation Army (PLA)—the end goal being a leaner and meaner military force, capable of undertaking a broad spectrum of missions under modern, high-tech conditions. Part of this drive towards a “new-age” PLA has been efforts to modernize the PLA Marine Corps (PLAMC), which notably carried out its latest winter training in the Gobi Desert, in Xinjiang.

Reported by Chinese sources as a combined-arms, live-firing war game involving over ten different PLAMC branches, this exercise featured state-of-the-art equipment, as observed in official photos released by Chinese media. The exercise was designed to enhance the PLAMC’s ability to operate in a real war situation, under day and night conditions. Besides conventional combat maneuvers against “Blue Force” adversaries, the exercise also included counterterrorism training.

To be certain, these PLAMC winter maneuvers are just one of several such training drills conducted under various climatic conditions. One such instance is Exercise Jungle, whose 2015 iteration was staged in the tropical southwestern province of Yunnan. The varied PLAMC training syllabus can be deemed a natural expansion of its capabilities and missions, considering that it is traditionally tasked to undertake operations against Taiwan in particular.

But there is more to it than that. In recent years the PLAMC is not merely maintaining its readiness to mount an amphibious invasion across the Taiwan Strait (or conduct other operations in the context of the East and South China Sea disputes). Rather, it is bulking up in order to give the Chinese political leadership another flexible tool for responding to contingencies not just within China’s immediate East Asian region, but also beyond.

Taking a Leaf from the USMC Playbook?

But one may ask: why the PLAMC instead of special operations forces? To be sure, the PLA possesses a plethora of special operations forces that can perform various difficult, emergency and rapid response missions. However, like the United States military, one can never have quite enough of these small, elite forces. Consider that the U.S. has the Marines, the Eighty-Second Airborne, Delta Force and the SEALS, for example, all of which can be rapidly deployed in response to worldwide contingencies. But their capabilities vary considerably. Akin to a plumber’s tool kit, which contains more than just a few pipe wrenches, it helps to have multiple tools on hand to apply to situations depending on what is required. In particular, amphibious forces give China’s leadership the potential option of landing troops and equipment and conducting operations ashore, both near and far from China.

In order to build a more expeditionary PLAMC, the Chinese appear to study and emulate the U.S. Marine Corps (USMC)—including the latter’s vow to “fight in every clime and place.” Seen in this light, its winter and desert training makes sense. One recalls that during the Cold War in the 1980s, in addition to jungle and desert warfare, one of the USMC's principal missions was in Norway, where a significant amount of training took place in the context of a considerable focus Corps-wide on cold weather missions.

Notably, the future of the PLAMC will no longer be confined to just static defensive and offensive regional roles. One of the most obvious hints of Beijing’s interest in projecting the PLAMC further afield beyond its immediate region appeared back in August 2015, when it staged the first-ever joint amphibious landing exercise with Russia as part of the annual Exercise Joint Sea 2015 (II). This was the first time the PLA shipped armored vehicles and landed troops directly into an overseas exercise area following a long-distance voyage, according to a PLA official. It involved landing more than 100 PLA marines in fourteen ZBD-05 amphibious infantry fighting vehicles—the Chinese equivalent to the USMC’s AAV-7—which were disembarked from the Type-071 landing platform dock Changbaishan more than one kilometer from the beach in Vladivostok. Another twenty-four PLA marines fast-roped by helicopter, whereas a smaller Type-072A landing ship tank Yunwushan disembarked six armored vehicles and twenty-six PLA marines directly onto the beach.

Joint Sea 2015 (II) sets the foundation stone for the PLAMC’s future expeditionary operations. Yet, to accomplish this, large investments in various facets of capacity-building are required. Fortuitously, Beijing can afford the type of military spending it hitherto could not. Since it fits well within the grander PLA vision of mustering integrated fighting forces, the PLAMC is a key beneficiary. Besides ramping up training to hone its doctrine under various climatic conditions, the PLAMC is also reinvigorating its physical ability to project force.

As part of its study and emulation of the USMC, the PLAMC is bolstering both its mobility and firepower. Both the ZBD-05 and ZBD-2000 amphibious infantry fighting vehicles have already begun serial production, with the ostensible aim of replacing all of the PLAMC’s vintage armor such as the Type-63/63A amphibious light tanks. But most significant has been the gradual enhancement of the PLA Navy’s strategic sealift capabilities in support of the PLAMC’s envisaged expeditionary operations beyond East Asia.

The PLAN already has a range of amphibious landing vessels. However, Beijing is long keen on building larger and more capable ones similar to those operated by the U.S. Navy, for example the newest America-class amphibious assault ships (LHAs). In April 2015, the Beijing-based magazine Maritime China revealed via its official Weibo account a model of the PLAN’s future LHA-type vessel. The ship appears to have landing spots on its flight deck for six to ten medium helicopters, though noteworthy is that besides having the internal well deck commonly found on such landing ships (except oddly enough, the lead ship USS America itself), it appears to have just one elevator astern, which risks paralyzing flight operations once rendered inoperable in combat. Touted by Chinese and foreign sources as Type-075 (Kanwa Defense Review, for example, reported it as having the designation M1), the ship may measure no less than 200 meters in length and displace 40,000–50,000 tons. Like most of the America class, this Chinese LHA will be capable of launching vertical take-off and landing (VTOL) fighters, helicopters, air-cushion landing craft and amphibious assault vehicles.

In July 2015, the PLAN commissioned with the South China Sea Fleet Donghaidiao (hull number 868), a semi-submersible ship (described in Chinese media as a “semi-submersible mother ship”) that is seen as analogous to the USN’s Montford Point–class Mobile Landing Platform (MLP). Measuring 175.5 meters in length, 32.4 meters in beam and displacing 20,000 tons, it is built by the Guangzhou-based Wenchong Shipyard and appears to share many similar characteristics as the MLP. So far only one vessel has been spotted, and it debuted in a recent PLA exercise. Most likely it is designated a PLAMC sea basing test bed, which may spawn follow-on models.

These developments do point to the PLAMC’s quest towards forming, along with the PLAN, an analogue to the USN/USMC’s Amphibious Ready Groups (ARGs) and Expeditionary Strike Groups (ESGs). This would be a technically and financially less ambitious enterprise compared to building a carrier strike group revolving around aircraft carriers with their more complicated technologies. Moreover, Beijing may leverage on its existing accumulated experience in building and operating amphibious landing vessels as well as associated helicopter, air-cushion landing craft and amphibious armor capabilities.

It seems inevitable that the PLA’s expeditionary capabilities will progress, so long as the domestic political will and availability of funding persist. All that is needed is the raison d’etre to project the PLAMC abroad. In this respect, counterterrorism (CT) is a promising avenue. It is arguably a less controversial activity, as opposed to exercises involving “straight” force projection military capabilities, for the purpose of cultivating foreign military ties. With such “frenemies” as India, CT constitutes the theme of the Hand-in-Hand Exercise. With close friends like Pakistan, China has pledged closer CT links. Most recently, Beijing offered to aid Arab states’ CT capacity building. Moreover, the rise of extremism, as seen in the threat posed by the Islamic State, provides a legitimate strategic rationale.

Such is the rationale that underpins the Counterterrorism Law of the People’s Republic of China, which was promulgated late last year and came into force on January 1. “Terrorist attacks have caused heavy losses of people's lives and properties, posing a serious threat to our security, stability, economic development and ethnic unity,” said a Chinese security official. Nonetheless, to dispel external concerns about a “militarily interventionist China,” Beijing sought to assure that the new legislation will govern the PLA’s overseas CT deployments based on the UN Charter, while respecting the concerned countries’ sovereignty.

That may sound reassuring—but not to all, especially to those who question Beijing’s real strategic intent. Since 2008, when China deployed its first naval task force to participate in multinational antipiracy efforts in the Gulf of Aden, one may observe incremental measures adopted by Beijing to enhance its “out-of-area” military presence, with its sights set on the Indian Ocean region that covers Africa and the Middle East. Existing access to Pakistan’s Gwadar seaport and the recent “consensus to build logistical facilities” in Djibouti may allow the PLA to project and sustain presence. Much overlooked, however, is the growing PLAMC footprint beyond East Asia, including in Russia. In November 2014, China and Tanzania held their first joint marine corps training exercise, codenamed Transcend-2014, whose final “Comprehensive Exercise” phase notably revolved around the CT theme.