Can East Asia Move Past Its History Problem? 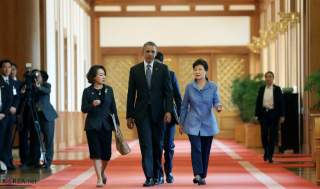 In East Asia, distrust and failed cooperation is often blamed on the region’s “history problem.” To date, that conversation has emphasized Japan’s failure to atone for its World War II-era atrocities, how this poisons contemporary relations, and how Japan must show greater contrition in order to make things right. Sometimes the United States is exhorted to pressure Tokyo for more apologies.

The United States should help its allies and partners deal with the region’s history problem, and in doing so, can take advantage of an unusual opportunity to advance both its strategic and normative interests. Washington has a national security interest in strengthening its relations with Tokyo; in encouraging close ties between Japan and other American partners, especially South Korea; and in thwarting Chinese efforts to use history to drive a wedge between Japan and its neighbors. Furthermore, the United States has a normative interest in drawing attention to human rights abuses in East Asia today.

U.S. national security and normative interests overlap—and yet Washington has so far missed the opportunity to advance them in this case. That’s because it’s a challenge on the one hand to focus on contemporary human rights abuses without making survivors of World War II-era violence feel as if their suffering is being forgotten or marginalized. And it’s a challenge on the other hand to focus on those events to a sufficient degree without unfairly singling out Tokyo.

The United States and its partners can square this circle by reframing the conversation about East Asia’s history problem. The conversation about Japan’s World War II atrocities should be fit within the historic sweep of human rights abuses in East Asia. In the past, human rights violations were committed by colonizers and combatants like Japan, the United States, and others; but today are committed by authoritarian governments against their own peoples.

Why Apologies are Unproductive

The apology frame is a dead end for three reasons. First, Japan has apologized. A lot. Although critics will protest that Japan only offered half-hearted apologies, this is unfair. For example, former Prime Minister Junichiro Koizumi, often described as a far-right nationalist because he visited Yasukuni shrine, also visited Seoul’s Seodaemun prison. This was where, during Japan’s rule of the Korean peninsula, colonial authorities incarcerated, tortured, and killed Korean independence leaders and their family members. Today the prison features a museum that explicitly details Japanese atrocities, and a monument to Korean independence leaders.

Koizumi laid a wreath at the memorial and offered his “heartfelt remorse and apology for the tremendous damage and suffering Japan caused the South Korean people during its colonial rule.” Koizumi commented that after he viewed the prison exhibits, “I felt strong regret for the pains Korean people suffered during Japanese colonial rule. As a politician and a man, I believe we must not forget the pain of [Korean] people.”

Koizumi’s apology was far from isolated. Another prime minister, Morihiro Hosokawa, gave an important apology during a trip to South Korea. He said:

“During Japan's colonial rule over the Korean Peninsula, the Korean people were forced to suffer unbearable pain and sorrow in various ways. They were deprived of the opportunity to learn their mother tongue at school, they were forced to adopt Japanese names, forced to provide sex as ‘comfort women’ for Japanese troops, forced to provide labor. I hereby express genuine contrition and offer my deepest apologies for my country, the aggressor’s, acts.”

Because these statements accepted Japanese guilt, enumerated Japanese crimes, and were offered at symbolic locations, they were powerful apologies by any standard. And other Japanese leaders have offered several other impressive statements, including Tomiichi Murayama’s 1995 apology that subsequent governments (including Shinzo Abe’s) have reaffirmed.

The Japanese people know that their leaders have apologized, so when those gestures are ignored and Tokyo is repeatedly asked to apologize again, many people protest. They argue that Chinese and South Korean leaders are not truly interested in reconciliation, but are wielding the history weapon to score domestic political points at Japan’s expense.

A second reason why the apology frame is so counterproductive is that political apologies, particularly interstate apologies, are usually quite controversial domestically. People often describe apologies as a medicine that will have healing effects. Perhaps sometimes they will. But like any medicine, apologies also have side effects, which are sometimes toxic.

Apologies prompt domestic political opponents to stand up and protest. When, for example, in 1994 Prime Minister Murayama offered an impressive apology, one of the conservative cabinet members in his coalition government objected. Sakurai Shin said, “I do not think Japan intended to wage a war of aggression. . . . It was thanks to Japan that most nations in Asia were able to throw off the shackles of colonial rule under European domination and to win independence.”

This is a pattern we’ve seen many times in Japan: when a leader gives an apology, or when a candid textbook is released, conservatives speak out and put forward a different narrative about the country’s history. And this is why Japan’s critics argue that Tokyo has not apologized, when in fact the problem is not the absence of apologies, but the backlash they often provoked.

Many people often compare Japan with Germany, whose leaders apologized often. However, German conservatives did not react by justifying or denying Nazi violence. But such restraint is extremely rare, and indeed a look around the world shows that political apologies (particularly international ones) usually provoke backlash. While some people advocate greater reflection about the country’s past violence, others argue that this dishonors national heroes and undermines patriotism. In doing so, they often justify or minimize past abuses, to the chagrin of victims.

Such dynamics are readily apparent in the United States, where apology to Japan for the atomic bombings would be politically inflammatory; even a museum exhibition on the subject produced fierce backlash. In 1995, the Smithsonian created a museum exhibition on the Enola Gay aircraft (which dropped the atomic bomb on Hiroshima). A self-reflective script that depicted Japanese suffering on the ground prompted outcry from veterans and Congressional leaders. One veteran called it an “insult to every soldier, sailor, marine, and airman who fought in the war against Japan.” Veterans protested that the atomic bombings had ended the war and ultimately saved lives on both sides; they urged the Smithsonian to display the Enola Gay “proudly and patriotically.” Ultimately, a unanimous Senate vote forced the exhibit’s revision.

More recently, in 2009, President Obama offered some self-reflective, respectful words to U.S. allies and partners in speeches in Strasbourg and Cairo—about regrettable U.S. arrogance and lack of appreciation toward Europe and about the troubled relations between the United States and the Islamic world. Mitt Romney, Sarah Palin, and other conservatives subsequently decried the President’s diplomacy as an “apology tour.” (Romney also lamented it in his memoir, entitled: No Apology.)

In 2010, the Obama administration debated the idea of the president visiting Hiroshima and making a reconciliatory gesture or statement. But it demurred, understanding that such a gesture would have triggered an outpouring of contradictory statements from U.S. conservatives, complicating relations with an important ally. U.S. Ambassador to Japan John Roos was sent instead to attend the sixty-third anniversary of the bombing that August—his respectful (and silent) presence was hailed as a success in deepening U.S.-Japan reconciliation.

Beyond the United States, calls for reflection about past violence have prompted outcry in Austria, Britain, France, Israel, and pretty much everywhere. Apologies produce backlash because of democratic politics that we can all understand: making them, in general, a poor tool for reconciliation.

The third reason to abandon the focus on apologies in East Asia relates specifically to U.S. strategic goals. The emphasis on Japan’s World War II abuses drives a wedge between Japan and its potential allies, and pushes those potential allies toward China and North Korea. This contravenes the U.S. interest of encouraging amity and political-military cooperation among its partners. Furthermore, American pressure for more Japanese apologies angers Tokyo, souring U.S.-Japan relations.

One can only speculate why the conversation about East Asia’s past came to be framed around apologies. (This was not the case in Western Europe, where Germany’s postwar partners did not seek them.) But let us abandon this framing now: it does nothing but antagonize Japanese conservatives and moderates, and sustain—rather than soothe—the region’s history problems.

The conversation about history in East Asia should be reframed around human rights. Doing so would advance U.S. strategic objectives described above; it would also advance America’s normative objectives (normally compromised in deference to national security goals) of drawing attention to human rights violations in East Asia today.

The abuse of human rights has occurred in different waves. Earlier there was the wave of American and European colonialism in which the British carved up China; France colonized and inflicted tremendous violence upon Indochina; and the United States during its colonization of the Philippines killed hundreds of thousands of people and committed terrible atrocities. Americans can and should acknowledge this violence. As we are always telling Tokyo, it’s the right thing to do.