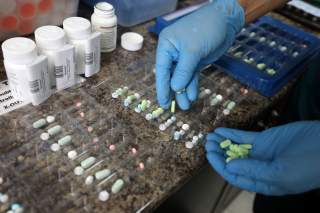 With so much negative news connected to Ukraine these days, it is worthwhile to point out some bright spots in that country’s larger political evolution.

Of these, one of the most striking is the Ukrainian health care sector. There, free-market-based reform efforts have significantly improved the lives of most Ukrainians, while also highlighting the importance of standing up for individual rights against entrenched bureaucratic interests.

The driving force behind these changes has been Ulana Suprun, the country’s former acting Minister of Health. An American medical doctor, Suprun is the daughter of Ukrainian refugees who fled before the advancing Red Army in World War II, ultimately settling in Michigan. In 2013, she and her husband Marko moved back to their ancestral homeland, where they subsequently became activists in the 2014 “Euromaidan” demonstrations that swept pro-Kremlin strongman Viktor Yanukovych from power. During the protests, Suprun gave medical care to demonstrators that were attacked, often brutally, by regime forces. And in the period after Yanukovych’s ouster and Russia’s subsequent invasion of eastern Ukraine, Suprun was involved in training front-line medics when the Ukraine Army fought Russian-backed separatists in the Donbas region. For these and other efforts, the Supruns were awarded Ukrainian citizenship.

But the story doesn’t end there. In 2016, then-Ukrainian president Petro Poroshenko personally asked Dr. Suprun to help reform Ukraine’s medical system, which was still based on the Soviet-era model of inflexible, top-down, socialized micro-management, and was both inefficient and highly corrupt. That system supported a massive medical infrastructure that underperformed by virtually every metric, with devastating results. Under the old system, the life expectancy for Ukrainians lagged ten years behind those of their neighbors.

To combat this, old premises and regulations were abandoned. Market principles were adopted in every aspect of health care. Hospitals, which had been administered at the national level, were put under local control. They were also streamlined; under the old system, hospitals never closed, regardless of their condition, local requirements, or changes in medical care. As a result, the number of existing facilities were fully five times the number needed, and patients were not allowed to shift from one hospital to another. To counter this bloat, competition between hospitals was introduced so patients could decide which would prosper and which must close.

Providing medicine and supplies was another socialist-era scandal. So much money was being siphoned off in graft that there was no guarantee a patient would be provided with even the most basic care. Patients were forced to buy their own bandages and even x-ray film and bring them to appointments. The existing law, meanwhile, required all medicine to be sourced inside Ukraine in order to protect local manufacturers. The result was protectionism and missed opportunities; in one related scandal, the Canadian government offered to provide polio vaccines at no cost, but Ukraine refused—which, in turn, led to polio outbreaks in western Ukraine (something more often seen in the developing world). Under Suprun’s reforms, however, the country opened up to international providers, and the cost of medicine dropped by an average of 40 percent.

A multitude of other changes were likewise implemented. Employment in the health care sector, previously public, was privatized and downsized. It was also allowed for a professionalization of the country’s medical corps, which had long employed unqualified doctors and outdated protocols. Hospitals were given the freedom to experiment with different business models to see what would be most effective. Doctors, meanwhile, began to be paid not on an automatic, government-controlled salary schedule but based on the care they provided, incentivizing them to work harder to develop better relationships with patients and making them partners in care. Medical education has also improved, while salaries of health workers have gone up appreciably. Perhaps most tellingly, medical enterprises in Ukraine now had the “freedom to fail,” which was absent in the old Soviet model, and which encouraged market competition and prevented corruption.

The story of health care reform in Ukraine, however, is about more than health. It’s also about freedom. Dr. Suprun, who is now out of government but continues her reform efforts via the private sector, says that it encapsulates “a civilizational battle for liberty, fairness and accountability.” Her point is a profound one. Older Ukrainians have an ingrained fear of the power of the state, based on their grim Soviet-era experiences. Although health care is ostensibly an apolitical topic, the implications of reforming the old entrenched system by highlighting individual rights and empowering people are profound—and pave the way for people to demand greater freedoms in other areas. The state of Ukrainian health has thus become a barometer of sorts for the health of its fledgling democracy.