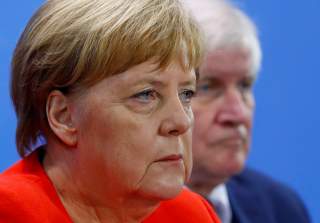 Russia, together with China, finished its largest manoeuver since the 1980s last week. In parallel, when a debate about the reintroduction of compulsory service began in Germany in late August, Chancellor Merkel aborted it top-down after only a few days. The potential strategic implications of its reintroduction (with no less than 3-500.000 conscripts per year) were simply swept under the rug.

It is tempting to think of Kishore Mahbubani in this context, who had asked in 2002, “Can Asians Think?” He mocked, of course, the idea that they could not think independently about global politics without guidance by Western powers. The wealthiest country at the heart of Europe, however, lacks a German Mahbubani. Might this be the case because the suspicions that Berlin prefers not to think strategically are not wholly unjustified?

With only few exceptions, most policymakers in Berlin divide into two camps. Both share the conviction that they cannot see why the world rather impatiently demands so much from their country. The “astonished” one often wonders why so few states have emulated its very successful economic and social-welfare model. The more “defensive” camp tends to resent any criticism of its (often self-indulgent) approach to national security, which suggests that the more militaristic U.S. strategy has not been that successful. These policymakers continue to insist that Germany had already started to talk about increasing its military spending, and not just because Donald Trump told it to do so, they assert. And that is it.

The problem with this view is twofold. It reflects a degree of self-satisfied introspection that in today’s world is conspicuously inapt for a country of Germany’s economic weight (it is the fourth largest in the world). More importantly, both the “astonished” and the “defensive” views are reactive driven by events, and therefore lacking an understanding of the geopolitical foundations on which Germany’s economic wealth and its freedom from military blackmail are fundamentally based. Hence, there is no serious debate on how Germany’s vast wealth and freedom may be secured in the future; neither is there a public debate on the purpose of its power. The contrast to the deeply felt German angst about the future of the liberal world order could not be more ironic—and telling.

The essence of Merkel’s strategy, when it comes to those foundations, has invariably been economic. Throughout the thirteen years of her chancellorship, she has always stuck to this pattern. When Russia invaded Crimea, her focus was on sanctions; ever since China has shown its military instincts, she has aimed to enroll Beijing in deeper economic ties with Berlin. Germany’s Bundeswehr is currently in a catastrophic state, and to a large extent because Miss Merkel has downplayed the genuinely military aspects that undergird any “normal” power’s grand strategy during her reign. It is also one of those remarkable secrets that only a few people want to discuss in Berlin.

Regardless of her overall approach to strategy and her relationship to Donald Trump, however, the future grand strategy for Germany’s security—and Europe’s security—inevitably needs to be based on a realistic understanding of the United States’ core strategic goals. In particular, it is absolutely vital to understand how America plans to strategically adapt to the momentous structural shifts in the tectonic plates of its own order. East Asia, specifically China, present the largest challenge for America’s strategists. Germany (and the EU) will only minimally be able to influence their planning process. It is more likely that the Europeans will have to cope with the consequences of U.S. decisions about the future shape of the world order. But German strategists should realistically anticipate—and plan for—the most salient and probable developments that may ensue.

Two likely developments, possibly intricately intertwined, will need to be made top priorities. Overlooking the linkages between the two would misunderstand their complexity; at the very least, this would be strategically unimaginative.

One potential development is a war in the South China Sea. It might start as a minor accident, but clearly it would have the potential to evolve into a large-scale war since the United States’ hegemony in East Asia is at stake. China’s military build-up and its systematic building of runways on several artificial islands, which it has simply occupied, feeds into the heightened probability of such a war. The question German strategists need to ask themselves is: would Russia’s Putin seize the opportunity to attack NATO’s Eastern flank when America is seriously engaged and thus distracted by a challenge from its most powerful strategic rival? When considering this key point, strategists should remember the crucial remark Defense Secretary Gen. Jim Mattis made in 2017 when asked whether the United States was capable of fighting two wars at the same time: “No, Sir!”

The other development, which may precede or coincide with the first development, equally relates to China. The White House may come to the conclusion that the best way of countering China’s power is by undertaking a grand-policy adjustment. This move is not unlikely. As the former commander of the U.S. Pacific fleet, Adm.  Harry Harris, stated, Americans need to “recognize that we may no longer be able to maintain broad sea and air control as we did in the past.” Based on that, Washington could decide that effectively balancing Beijing may only be successful if Russia was offered a rapprochement, thereby breaking away from China and isolating it. This reversal of the rationale behind Kissinger’s opening to China in the 1970s is a strategic technique that has already been discussed in some quarters in the United States.

But that technique has not been a hot topic of discussion in Berlin. This is very disconcerting given that Russia would gain substantially more leverage over Europe than it ever had in the past. The key point is, of course, that America may want something rather big from Russia (such as Moscow giving up its tainted relationship with Beijing), which would enable Russia to demand a freer hand over its “near-abroad” and Europe. That’s something that Putin has been wanting for a long time. There is no doubt that America would protect its investments in Europe and, as a sea power, would want to remain in control of the Atlantic as well as have protected access to European shores. Nevertheless, anticipating a U.S. rapprochement with Russia, German (and European) strategists need to think ahead and come up with strategic plans that would concentrate on one aspect in particular: how to prevent blackmail from Russia? An idea that is beginning to gain prominence in some quarters of the media in recent months is the suggestion that France and Germany should consider shared nuclear capabilities, giving both states equal rights in regard to nuclear decisionmaking. This idea, if turned into strategic planning, would undoubtedly enter the psychological calculations of Russia, should America offer it an opening for the sake of weakening China. Critics will say that this proposal stretches the imagination too far. Still, ignoring such improbable developments in East Asia simply because they would lead to unwelcome policy consequences will not make the proverbial elephant in the room disappear.

So, can Germans think strategically? This week, the central figure for organizing Merkel’s power basis in the Bundestag since 2005, Volker Kauder, was voted out of his office by a majority of her conservative party. Some see this as a crucial victory in that more and valuable room for less top-down debates against the chancellor, despairingly long demanded for by many policymakers, has now been carved out.

If strategy fundamentally is about the choices to be made, in this case, Germany has no choice.

Dr. Maximilian Terhalle (@m_terhalle) is associate professor of Strategic Studies at Winchester University (UK), senior research fellow at the Grand Strategy Program of King’s College London and adjunct professor at Potsdam University (GER). He has been published in the National Interest, Foreign Policy and the Frankfurter Allgemeine Zeitung. His latest book is titled The Transition of Global Order: Contestation and Legitimacy.