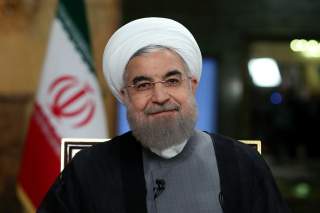 Before the U.S. elections, when Trump’s chances at ascending to the Oval Office seemed, to most liberal voters at least, a distant possibility, Iranian hardliners lined up with many of the world’s other autocrats to cheer him on. This wasn’t just a display of schadenfreude. In Iran, few hardliners, and certainly not the country’s supreme leader, have ever said a nice thing about any U.S. politician. At the heart of their enthusiasm for Trump is the knowledge that however he changes U.S. policy toward Iran as president, it’ll significantly complicate Hassan Rouhani’s hopes of winning a re-election in May.

Rouhani has led a charge to fill the country’s elective institutions with a diverse coalition of moderates that generally share his centrist values on privatization and diplomatic engagement. In elections last February, he helped oust prominent hardliners from their long-held seats in the parliament and Assembly of Experts, a clerical oversight body. Supreme Leader Ali Khamenei, moreover, has a personal stake in the May elections, given his interest in isolating Hashemi Rafsanjani, a longtime rival who has orchestrated Rouhani’s rise, from the locus of executive power. As one former reformist official told Reuters in July, “Hardliners want a president who is closer to their camp and gets his directions from Khamenei's allies.”

Amid this maneuvering, Trump’s electoral victory has all but sealed the legacy, if not the fate, of Rouhani’s landmark policy: the nuclear deal. Trump has promised to either renegotiate or alternately dismantle it – not that the distinction matters much. Rouhani said the day after Trump’s win that there would be “no possibility” of changing the deal. Short of a credible U.S. threat of war, it’s difficult to imagine why Rouhani would accept less favorable terms. At a minimum, Trump would have to make the trying case for why world powers should renege on their prior commitments and reimpose an international sanctions regime.

Suffice it to say, Trump may not know how to negotiate a “better” deal without losing the necessary international buy-in. The furthest his campaign staff has gone toward explaining how to wring a more exacting agreement is a garbled statement of the obvious: “He will take the agreement, review it, send it to Congress, demand from the Iranians to restore few issues or change few issues, and there will be a discussion,” Walid Phares, a top foreign policy adviser to Trump, told the BBC.

Regardless of what tack he takes in his first 100 days, Trump’s rhetoric makes it clear that he doesn’t intend on sweetening the deal for Iran. This has major implications for Rouhani’s popularity. Since the deal’s implementation in January, he has been fighting the perception that it’s failing. Rouhani justified his concessions by promising two outcomes: first, they would alleviate the threat of war against the world’s greatest military power, and second, they would inject foreign capital into the Iranian economy and reconnect it to the global marketplace.

Hardliners have already questioned this bargain, asking why Rouhani negotiated away the country’s hard-fought nuclear program for disparately little economic relief. “The public is asking: what has the nuclear deal accomplished for people’s livelihood and for the dignity of Islamic Iran?” an editorial in the country’s hardliner Kayhan newspaper asked last July, and that was when Rouhani still had a U.S. counterpart who wanted the deal to succeed as much he did. According to a poll released that same month, three-quarters of Iranians, out of a sample of 1 thousand, said they haven’t seen any economic improvement since the deal was signed.

That poll suggests the extent to which the deal hasn’t panned out for Iran. It was supposed to act as a springboard for foreign investment in Iran, a country endowed with natural resources, a robust consumer base and an unrivaled manufacturing capacity. But the gold rush never came, in large part because banks refrained from resuming commercial ties with Iran. The nuclear deal may have lifted restrictions on international trade with Iran, but it left intact a dizzying array of U.S. sanctions, which have in turn left an insurmountable compliance risk for big banks.

Their reluctance stems from a contradiction embedded in the text of the deal. While the United States committed to lifting certain sanctions, and letting Iran reintegrate with the world economy, it also maintained the architecture of its unilateral sanctions, similarly designed to punish foreign companies for involvement in a plethora of still-illicit activities. So the United States is in the position of supporting contradictory perceptions of Iran’s business environment – one built around fear of legal repercussions and the other around opportunity to make profit. This dichotomy, reflected to an extent in the tension between the Treasury’s role in enforcing sanctions and the State Department’s in playing liaison to Iran, has produced a climate of confusion and apprehension among the international business community. After years of enduring heavy U.S. fines and lectures about the dangers of doing business in Iran, banks have simply decided that the risks posed by existing sanctions outweigh the rewards of capitalizing on the business legalized by those that were lifted.

Unsurprisingly, Rouhani and Zarif have faulted the United States for blocking Iran’s economic revitalization. In September, Rouhani slammed the United States for a “lack of compliance” and for frightening “the big banks with the threat of potential action.” Iran’s central bank governor made a rare visit to Washington last April to likewise demand movement on the banking issue, calling for the United States “to do whatever is needed to honor their commitments.” The basis of these criticisms is not that the United States hasn’t lifted the sanctions it said it would but rather a clause in the agreement that obligates the United States to refrain, in general, from any policy that interferes with “the normalization of trade and economic relations with Iran.” The Iranians, thus, expect to have not only sanctions relief but also a path to economic reintegration that is unhindered by U.S. policy.

Whether that is possible without defanging the remaining sanctions is an open question. Last spring, the Obama administration floated a proposal that would’ve allowed banks to temporarily access U.S. dollars in clearing payments to and from Iran, an important step toward alleviating legal pressure on the private sector. But this proposed solution appeared to violate a ban on U.S. banks so much as touching money that at some point originated in Iran, and so it has since disappeared as an option. Even so, the State Department has dutifully attempted to address Iran’s concerns and mediate with banks. “In fact, I have personally gone beyond the absolute requirements of the lifting of sanctions to personally engage with banks and businesses and others who have a natural reluctance after several years of sanctions,” Kerry said in June, after a meeting with Iranian Foreign Minister Javad Zarif.

Now imagine whether Trump’s prospective nominees for Secretary of State – Mitt Romney and Rudy Giuliani – would go out of their way as Kerry has to reassure banks and mitigate Iranian concerns when such action is not clearly spelled out in the accord. To anyone familiar with either man’s hawkish bona fides, it’s clear that the Trump’s administration will either actively work to sabotage the deal or otherwise let it wither away on its own terms. If banks were wary of running afoul of U.S. sanctions under Obama, they’ll be downright cowered by Trump. His presidency is sure to aggravate Iran’s sense of being cheated, accelerating a process of disintegration that seems to have been baked into the agreement.

The halting economic progress taking place under the deal is unlikely to cause its undoing, but it has tarnished the brand of diplomatic engagement championed by Rouhani, Zarif, and their ilk of moderates. Khamenei surprised many Iran watchers by announcing his support for the nuclear talks early on. He called for “heroic flexibility” in talking with the Islamic Republic’s single greatest enemy. Perhaps the Americans had changed their longstanding hatred of Iran and would come to accept its place in the regional order. In the events that followed, he would not only have a basis to say all his lifelong suspicions were proved correct, but also claim some responsibility for whatever economic good came from disentangling Iran from the morass of international sanctions. Negotiating with Americans is a “lethal poison,” Khamenei said in August, the results of the deal proof that Iran should follow his ideology of resistance, his line of “continuous opposition to negotiating with America.”

The fact is, the United States hasn’t reneged on its commitments. Obama has waived the sanctions he said he would and tried his utmost to stop Congress from passing new sanctions that could be construed as inhibiting Iran’s economic recovery. Iran had unrealistic expectations, and the United States either misunderstood how much its remaining sanctions would undercut the potential for an economic opening, or really did mislead Iran to extract a “better” deal for itself. Regardless, Rouhani’s approach to foreign affairs, his basic faith in the power of diplomacy to resolve bitter conflicts, has been discredited. Following Khamenei’s lead, he has had no choice but to pass off the flaws in the deal onto the duplicity of the United States, avoiding blame for the deal’s shortcomings but at the same time distancing himself from the courageous diplomacy that made it happen. To be sure, Iran’s ruling elite, Khamenei included, is committed to the deal. Iran would prefer to maintain its warming business ties with Europe and higher output of oil, especially when the U.S. is so prone to voluntarily destroying the deal. The ultimate victim of Iran’s missed economic opportunity isn’t the investors who had hoped for a bonanza, and might not even be Rouhani if he survives re-election, but the idea that Iran can solve its disagreements with the U.S. by compromise instead of confrontation.