Can Iran and India Turn the Page? 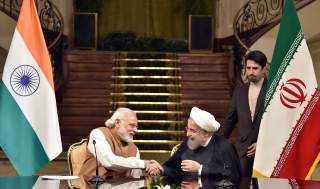 Iran and India have long had historical, cultural, and commercial ties. Tracing back a millennium, both countries have framed their shared roots as a “civilizational relationship.” Over the past decade, their economic ties, because of nuclear-related sanctions imposed on Iran by the international community, have centered on limited energy and agricultural products. In 2015, this trade amounted to about $16 billion. This number seems small when compared to $52 billion, the amount of bilateral trade Iran conducts with China. And yet for Iran, India is not only geographically closer than China—it also shares a similar geopolitical outlook for West Asia.

India sees Sunni Islamic fundamentalism emanating from Pakistan and the Middle East as its prime national-security threat. India seeks greater economic integration in Central Asia as not only a necessity in balancing China, but also as a stabilizing force in Afghanistan, a country in which both India and Iran have a vested interest. Both countries would like to see their relationship transition into a strategic partnership that covers both elements of security and economic development.

Nothing symbolizes the elevation of the bilateral relationship between Iran and India more than the desire to develop the Chabahar port in southeastern Iran. Chabahar is Iran’s only southern port, which sits outside the Persian Gulf in the Gulf of Oman. Its development has been in the offing since 2003, and proceeded by fits and starts. In the meantime, a competing port in Gwadar, Pakistan—a hundred miles to the east of Chabahar—is being developed by the Chinese. Over the past decade, while Iran was reeling from the fallout of international sanctions, the Chinese and Pakistanis raced ahead with Gwadar’s expansion as Beijing poured $45 billion into the China-Pakistan Economic Corridor.

Despite falling behind the rival Chinese-Pakistani project, the rationale for Chabahar is as relevant now as it was a decade ago. Iran needs a port outside the Persian Gulf to access the Indian Ocean. It also needs massive investment in Sistan-Baluchestan Province, its poorest, to provide jobs and opportunity to its restive population. India, driven by its longstanding rivalry with Pakistan, seeks to bypass it to Central Asia, and Chabahar offers it the most expedient route to export its goods. Both countries also see it as a way to strengthen the central government in landlocked Afghanistan by providing Kabul with a trading and investment corridor that does not depend on Karachi.

Even during the height of sanctions, energy-starved India was a key importer of Iranian crude. Since sanctions were lifted this year, Iran has doubled crude exports to India and has become its third-largest supplier. Furthermore, despite India siding with the United States during Iran’s dispute with the international community over its nuclear program, both sides have shown a maturity to move on by strengthening ties.

As international oil companies are lining up to sign lucrative contracts with Iran, the Rouhani administration has made a point of reserving the Farzad B gas field in the Persian Gulf exclusively for Indian investment. After India pulled out of the Iran-Pakistan pipeline, due to U.S. pressure, many hard-liners in Iran pressed the government to open Farzad B to outside investments. Despite the rancor, the Rouhani administration took a closer look at Iran’s relationship with India, realizing that over time, India would be best suited as a partner for its development.

India’s geographical position and proximity to Iran make it a natural customer for Iran’s vast oil and gas reserves. Given its history of conflict with Pakistan, it would make sense that India seeks an undersea gas pipeline that transports Iranian gas from Chabahar, through Oman, to the Indian port of Porbandar. The Middle East India Deepwater Pipeline provides just that alternative, traversing through Oman, a country both Iran and India have robust ties with. India’s demand for natural gas is expected to double by 2021. Energy analysts predict that sometime in the next thirty years, India will become the world’s second-largest consumer of hydrocarbons. Iran’s oil and gas reserves, then, become more than a strategic instrument for India’s development—rather, they are a necessity.

Iran has prided itself on diversifying its economy away from oil and gas over the last decade. Given Iran’s large and educated youth populations under thirty that is technologically savvy, but limited in its development due to Western sanctions, India can serve as a model in developing a bustling IT and pharmaceutical sector. India’s private sector, banks and large corporations can offer their Iranian counterparts access to technology, credit facilities and know-how. Over time, Iran can serve as a stable and reliable partner for Indian goods and services in West Asia, while India can serve as a suitable counterweight to the trade that Iran conducts with the other Asian heavyweights, China and Russia.

While India and Iran continue to expand cooperation in a variety of sectors, both countries must be careful not to disrupt their existing relationships. For India, this includes its relations with the Gulf Arab states and Israel. For Iran, it means not alienating Pakistan and China. Pakistan, a nuclear power, is Iran’s largest neighbor. As a predominantly Sunni state with a large Shia population, Pakistan looks to Iran for energy cooperation as a means to stabilize its relationship and overcome thornier geopolitical issues.

Iran cannot turn its back on meeting Pakistan’s energy needs for the sake of India. Luckily for Iran, it has plenty of oil and gas to supply both countries. Similarly, during the last ten years, China has become Iran’s largest trading and investment partner. Beijing stuck by Tehran during the most onerous of its nuclear-related financial sanctions and continued to provide it with goods and services—albeit marginal in quality—as other countries ran for cover. Since the removal of sanctions, China has continued to invest in various sectors of the Iranian economy, particularly energy and petrochemicals. The Iranian economy is big enough to make room for both Asian titans.

On the flip side, India has a large and expansive trading relationship with Saudi Arabia and the United Arab Emirates. Furthermore, it has longstanding military and economic ties with Israel. All three countries are wary of Iran, and see Iran’s gains as their loss. As mature regional states, they must realize that India cannot isolate Iran economically or politically, because India will lose far more than it would otherwise gain.

The “civilizational relationship” has a long way to go before facts on the ground can meet the ambition of politicians in both Tehran and New Delhi. Political will and economic incentives exist on both sides to elevate the relationship from a mere trading partnership to a strategic partnership. It’s now a matter of execution, to see if expectations can meet the rhetoric.