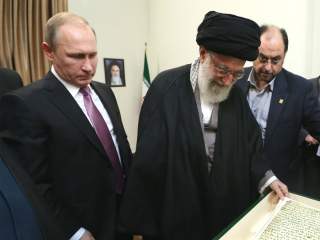 Ever since the Islamic Revolution of 1979, Iran’s Supreme Leader Ayatollah Ali Khamenei has stated that the United States is Iran’s enemy that cannot be trusted, and that wishes to topple the Islamic Republic and dominate Iran again. Since last year’s nuclear agreement between Iran and the P5+1 (the five permanent members of the UN Security Council, plus Germany), Khamenei has repeatedly claimed that Iran has carried out its obligations under the agreement, whereas the U.S. has done so only “on paper.”

The fact is that every nation and government pursues what it considers to be its national interests and expediency. To do so, every government uses everything in its disposal, including conspiracy, spying, deception, infiltration, etc. Thus, even friendly nations do not completely trust each other. Recall that the U.S. eavesdropped on leaders of many Western European nations.

But, the problem is that Khamenei speaks as if only the United States, Israel and their Western allies try to gain influence in Iran, or pursue policies that are not in Iran’s national interests. At the same time, Khamenei has been presenting a completely positive image of Russia and its president, Vladimir Putin. Yet even a glance at Iran’s history over the past two hundred years indicates that Russia has harmed Iran repeatedly including, for example, by imposing the Treaties of Gulistan (1813) and Turkmenchay (1828) on Iran, forcing it to cede large parts of its territory in the Caucasus region. Khamenei is also pursuing expanded relations with Russia to form a united front with it against the West. This requires not only a glaring double standard, but the breach of one of the main slogans of the 1979 Revolution, namely, “neither West nor East.” How did this come to be?

Khamenei likes to read Western novels, which I discussed in a previous article. He has also read many Russian novels, and considers himself well informed on the history of the October 1917 Revolution in Russia. In fact, some aspects of that revolution represent models that he thinks he should follow.

In a meeting with artists and cultural officials of the state in July 1994, Khamenei complained about the intellectuals, poets and writers in the pre-Revolution Iran, claiming that none of them joined the 1979 Revolution. He then turned to the Russian Revolution, and while conceding that it was very brutal and violent, “It attracted a large number of Russian intellectuals and first-rate writers and poets.” He mentioned Aleksey Tolstoy (1883-1945), the Russian writer—“whom I like very much”—and the fact that up until 1925 he was even a counter-revolutionary who had left Russia, but after he returned home, he wrote a “great novel” about the Russian Revolution that described beautifully its events. Khamenei then mentioned another Russian writer, Mikhail Sholokhov (1905-1984),who wrote And Quiet Flows the Don. Initially, Russian officials did not even allow publication of the epic novel, Khamenei said, but, “Unfortunately, [our] intellectuals, poets, and musicians did not support the Islamic Republic.”

Ali Larijani, the current Speaker of the Majles [parliament], headed the Voice and Visage of the Islamic Republic [the state-controlled national networks of radio and television] for 10 years, beginning in 1992. In a confidential letter to him, Khamenei wrote,

“If you read and watch the Russian novels and plays, you would know that they did their utmost to produce the best works, such as, for example, The Mother (a novel) and Vassa Zheleznova (a drama), both by Maxim Gorky; And Quiet Flows the Don, and tens of other novels and plays. They picture Russia both before the Revolution and the sacrifices made by the people and leaders after the Revolution. But, the work that has been done [in Iran] in this regard ever since the Revolution has been close to nothing. It is your duty to recognize this great responsibility and try to make up for it by serious and sustained work. You should report to me on the progress that you make” [Via Larijani’s ten-year memoirs, posted on the website of Jaam-e Jam, the website close to him].

To Khamenei, Russians’ use of music to encourage people to take part in wars is a model that should be emulated. In another meeting with cultural officials and figures in July 2011, Khamenei said,

I have heard that during World War II in Russia, the music played by Habil Aliyev [known in Iran as Aliyev’s Shur], the well-known music that you gentlemen know, but I do not and have never listened to, had the greatest effect on the people for exciting them to join the war efforts and go to the fronts. This means that the music was deployed for achieving people’s goals. Naturally, this is expected of any [true] artist in any nation. Thus, how can we be indifferent about this, while the enemy uses it?

To Khamenei, resisting the enemy is very important, which is why he said in September of 2005,

War and Peace of Leo Tolstoy is about the incredible resistance of the Russian People against Napoleon’s army, and the great movement of people of Moscow in order to defeat Napoleon. But, I believe the greatness of the book has its roots in the resistance spirit of the Russian people.

American Reform and Soviet-Style Collapse of the Islamic Republic

When the reform movement began in Iran after Mohammad Khatami was elected President in May 1997, Khamenei was deeply worried that the Islamic Republic would collapse in a way akin to what happened to the Soviet Union. He claimed that the Soviet collapse was an American plot using the weaknesses in the Soviet society, such as deep poverty, repression, bureaucratic corruption, ethnic and national tensions, and “deceived people,” such as Mikhail Gorbachev, as well as the mass media and culture. He then claimed that the United States intended to do the same in Iran.

In a long speech to senior officials in July 2000, Khamenei said that the Americans changed the meanings of Gorbachev’s Glasnost and Perestroika in a way that was acceptable to them. Then, Khamenei said, Boris Yeltsin entered the political arena, claimed that the pace of Gorbachev’s reforms was too slow, and accelerated them. Gorbachev was no longer useful to the Americans, Khamenei claimed and, thus, the Americans began propping up Yelstin through a “suspicious coup.” Yelstin was elected Russia’s President in 1991, and only seven months later the Soviet Union collapsed. “Through an intelligent 3-4 year plot, spending some funds, buying off some people, and using propaganda, the Americans could destroy the Soviet Union over the last 6-7 months [of its existence],” Khamenei concluded. His speech was shortly after Putin had been elected President in May 2000.

Khamenei also said that the goal of the United States was to transform Russia into a third-rate power, but the plot failed, “Because Russia is a powerful nation, and has people with a strong race. They have also made considerable progress in science and nuclear [technology], and their scientists and their research have made great strides.” Khamenei predicted at the time that Russia would make considerable progress, and he turned out to be correct. The Russian economy has grown at an average annual rate of 4.7 percent since Putin took over in 2000.

Khamenei claimed that the Americans have the same plan for Iran, but that they cannot succeed because,

First, they [the Americans] said that Khatami is like Gorbachev, but he is not.

Second, Islam is unlike communism [in the Soviet Union]. Russian people did not believe in communism, but Iranian people believe in Islam.

Third, the Islamic Republic is not a proletarian dictatorship [in the Soviet Union mold] that did not have [true] elections for 70 years, Even Western democracies, such as those in France and the United States, are not as popular as the Islamic Republic.

Fourth, Iran is a unified and homogeneous nation, unlike the Soviet Union that was a collection of various nationalities that had been glued together.

Fifth, the Soviet Union lacked the type of supreme leadership [a reference to himself] that the Islamic Republic has. If it had, then, when a leader like Yeltsin entered power to accelerate the reforms in an irrational and abnormal way, with people’s support the supreme leader could have dismissed him.

Khamenei then warned Khatami about defining precisely what he means by reform. Otherwise, “The Americans will give the reforms the meaning that they like, as they did in the Soviet Union,” Khamenei warned, adding that the United States will use newspapers, films, books, clothes and symbols of Western culture, such as McDonald’s, to pursue its goal. He then issued his explicit instructions:

All parts of the bureaucracy must confront Yelstin-type reforms, and do not allow an ambitious, deceived and negligent leader to deviate the [reform] movement from its righteous path, as if it is a race [toward the end of the Islamic Republic].

Khamenei, acting as the Supreme Leader, did not allow Khatami to carry out his reforms, and now he has even been expelled from the power structure. Khatami’s image has been banned, and he is not allowed to speak in public, give interviews, cannot travel abroad, and has even been prevented from private gatherings on such occasions as weddings and funerals. Khamenei has treated similarly former prime minister Mir Hossein Mousavi and his wife Dr. Zahra Rahnavard, two leaders of the Green Movement. Thus, he has demonstrated how he views the reformers.