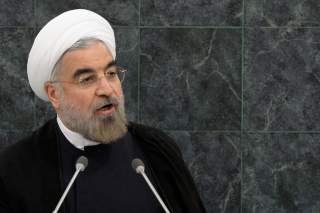 U.S. foreign policy toward Iran is approaching a “back to the future” moment, with the Trump White House resurrecting the strategy pursued by President George W. Bush (and, for a while, President Barack Obama) of pressuring Iran economically into abandoning its nuclear pursuits.

The question now is whether President Trump, or if necessary a successor, will push this pressure campaign—which the Administration is supplementing with outreach to Iran’s people and more security cooperation with its regional adversaries—to its conclusion.

If so, the regime in Tehran, which is presiding over an increasingly troubled economy and restive populace, may reach a point where it must choose between its nuclear program and its continued rule.

That’s what Secretary of State Mike Pompeo predicted in May when, after Trump announced that Washington would withdraw from the global nuclear agreement with Iran. Pompeo said that new U.S. sanctions would force Tehran to make a choice: “fight to keep its economy off life support at home or squander precious wealth on fights abroad.”

That Washington is shifting course on a major challenge of foreign policy, with a President upending the approach of his predecessor, is hardly unprecedented. For more than half a century, U.S. policy toward the Cold War shifted from containing the Soviets to engaging in détente to seeking an end to Soviet rule. U.S. human rights policy shifted just as dramatically, with some Presidents denouncing the abuses of allies and adversaries alike and others downplaying them in the interest of realpolitik.

The U.S. shift on Iran is particularly dramatic, however. Trump withdrew from the 2015 nuclear deal between the P5+1 (the United States, China, Russia, Britain, France, and Germany) and Iran. Afterward, Trump revived the very approach that Obama (and Bush before him) pursued before that deal—to use economic pressure to force Tehran to make the choice that Pompeo delineated.

In launching a new campaign of economic pressure, however, Trump is broadening the terms of the debate. Rather than focus narrowly on the nuclear program, he’s seeking to change Tehran’s behavior more broadly.

When Trump pulled the United States out of the deal, the President and his team not only criticized its time-limited restrictions, weak inspections regime, up-front sanctions relief, and other problems. They also derided its narrow focus and broadened the impediments to improved U.S.-Iranian relations to include Iran’s ballistic missile program, terror sponsorship, regional mischief, and human rights abuses.

Now, the Administration is pursuing a strategy of at least three parts:

First, economic pressure: Washington will begin re-imposing sanctions in early August, which will force major global business interests to decide whether to invest in Iran or retain access to the U.S. financial system.

Tehran's efforts to blunt the impact of the coming sanctions doesn't see to be working. For instance, the State Department has reported that more than fifty global firms already announced plans to leave Iran. In addition, the rial has hit record lows against the dollar in recent days and lost half its value since April.

Nevertheless, for the long-suffering Iranian people, times could get even worse. Iranian officials are reportedly discussing whether to reimpose the food rationing system in place during the Iran-Iraq war of the 1980s.

Second, outreach: Seeking a nuclear deal, Obama was careful not to anger the regime by embracing Iran’s population. Trump’s team, however, sees such engagement as another anti-regime pressure point.

“While it is ultimately up to the Iranian people to determine the direction of their country,” Pompeo said in late July, “the United States, in the spirit of our own freedoms, will support the long-ignored voice of the Iranian people.”

Third, enhanced security: Washington is nourishing closer ties to Iran’s regional adversaries. Talks are underway to create an “Arab NATO,” tentatively called the Middle East Strategic Alliance (MESA), which would include Saudi Arabia, Jordan, Egypt, and other states and which the United States would support.

As NATO proved a key tool in containing the Soviets during the Cold War, MESA would help contain Iran, which directly or through proxies largely controls the governments of Syria, Iraq, Lebanon, and Yemen. A National Security Council spokesperson called the alliance “a bulwark against Iranian aggression, terrorism, [and] extremism” that will “bring stability to the Middle East.”

If implemented effectively, this three-part strategy could leave Tehran weaker at home and more constrained abroad. The regime, then, will face the challenge of attempting to ride out the pressure campaign until the next inevitable change in U.S. foreign-policy.