Can Joe Biden Take America Back to the Future? 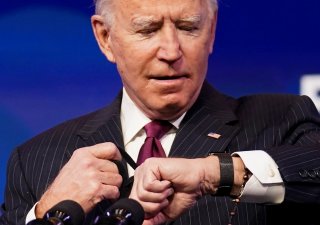 IN 1853, American diplomats appeared in suits rather than court uniforms at a reception in Berlin. Their perplexed Prussian counterparts asked why they were dressed in black like undertakers. “We could not,” one American official quipped, “be more appropriately dressed than we are, at European courts, where what we represent is the burial of monarchy.”

This exchange might seem like an instance of innocent raillery, but it underscores the early American republic’s enthusiasm for egalitarian and anti-monarchical sentiments that regularly vexed European leaders. The belief that America represented a Novus ordo seclorum, or a new age, antedated 1776 itself. John Adams, who would become America’s second president, wrote in 1765 that the settlement of America had opened a new chapter in the annals of freedom, “a grand scheme and design of Providence for the illumination and emancipation of the slavish part of mankind all over the earth.” His ebullient assessment was widely shared. In 1789, as minister at Paris, Thomas Jefferson assisted French revolutionaries in drawing up the Declaration of the Rights of Man. Nor did he ever lose his faith in regime change, declaring in 1795 that the American revolution had set in motion a “ball of liberty” that would “roll around the globe.” More cautious was Jefferson’s frenemy, John Quincy Adams, who abhorred the French Revolution and delivered a July 4 oration in 1821 adjuring his countrymen, many of whom had become enamored of supporting the struggle for Greek independence by any means necessary, that they should serve as an example rather than go abroad in search of monsters to destroy.

But the impulse to set wrong aright was difficult to suppress: in 1851 Congress passed a joint resolution stating that the statesman and orator Louis Kossuth, who had led an abortive uprising in Hungary against the Habsburg monarchy as part of the 1848 revolutions, should be invited to America as the “guest of the nation.” During his travels across America, Kossuth met with the Senate in full military dress and was feted at a congressional banquet by Secretary of State Daniel Webster. “We shall rejoice,” Webster declared, “to see our American model upon the Lower Danube and on the mountains of Hungary.” The conviction that America should serve as a model for the world was perhaps most warmly espoused by Herman Melville in his novel White-Jacket:

we bear the ark of the liberties of the world. …let us always remember that with ourselves, almost for the first time in the history of earth, national selfishness is unbounded philanthropy; for we cannot do good to America, but we give alms to the world.

No one has promised to do more to revive this vision of America as an exceptional nation than President-elect Joe Biden. At the 2019 Munich Security Conference he stated, “This too shall pass. We will be back.” His campaign website declares, “the United States must lead not only with the example of power, but the power of our example.” But will Biden be able to fulfill his lofty vow? Or will his presidency represent more continuity with the Trump era than he might like to admit?

To help address such questions, The National Interest has asked a leading group of scholars and policymakers to examine and explicate America’s purpose over the next four years. This has now become a firm part of the magazine’s tradition. After the end of the Cold War, Owen Harries, who was the co-editor with Robert W. Tucker of TNI from its inception in 1985, launched a symposium to explore what role American should play in the aftermath of that momentous conflict. It set the stage for the magazine to serve as a vital forum in following decades for debates between neoconservatives such as Charles Krauthammer, who argued on behalf of American supremacy, or a “unipolar moment,” and staunch realists such as Harries who argued that 9/11 was likely to spur a dangerous overreaction in America.

Harries had it right. The Iraq War, which Donald Trump alone among the Republican candidates called “a big, fat mistake” during the South Carolina primary in 2016, not only upended the Middle East, but also put paid to American pretensions about the consequences of blithely ignoring the sovereignty of nations and attempting to reorder the global map. The neocons may have preached democracy and liberty and freedom, but they forgot that no body of men will be argued into slavery. Their doctrine of regime change led not only to the overthrow of Saddam Hussein and the breakup of Iraq, but also of the Republican elite itself. By the end of his presidency, President George W. Bush had plunged America into fiscal misery and foreign policy disaster. Most of Trump’s rivals in 2016 for the Republican nomination seemed to be arguing for a policy of back to the future. It was a losing formula. In his contribution to this issue, William Ruger avers, “however imperfectly, Trump’s actions and rhetoric shattered the Republican foreign policy consensus that had largely dominated the conservative movement and GOP since at least the early 2000s.” As president, Trump embarked upon an audacious and failed attempt to reinvent America itself in his own image. His mission resembled the seventeenth-century English poet Andrew Marvell’s depiction of Cromwell as an imperious leader who sought to “To ruine the great work of time/And cast the kingdome old/Into another mould.”

Enter Biden. He has cast himself not merely as the restorer of America, but as its redeemer. Some of the changes he can make are easy and obvious. As John J. Mearsheimer observes in this issue, “Biden and his lieutenants have some room to maneuver. The new president can and should use executive orders to reverse numerous Trump policies dealing with the environment, the financial sector, and immigration. Moreover, the United States should quickly rejoin the Paris Climate Agreement and the World Health Organization and put an end to the so-called Muslim Travel Ban.” The larger question will be whether Biden can extricate America from its entanglements in Afghanistan and Iraq, conclude arms-control agreements with Russia, revive a nuclear deal with Iran and meet the China challenge without toppling into outright confrontation. The importance of this can scarcely be exaggerated. As Dimitri K. Simes notes, “the danger of a nuclear confrontation is growing. This uncomfortable truth is rarely acknowledged, but not for a lack of warning.”

Too many in Washington are thirsting for a cold, or even hot, war with China. The belief in confrontation with Beijing could become a self-fulfilling prophecy, much as it did before World War I among bellicose elites in Wilhelmine Germany who viewed France and England as inveterate foes. By contrast, Graham T. Allison astutely suggests that while China is clearly growing in power, there is also some room for optimism, particularly when it comes to climate change: “Biden worked with President Barack Obama and Secretary of State John Kerry to hammer out a climate accord with China that made possible the international Paris agreements… While Trump withdrew from this agreement, Biden will rejoin it on Day 1 and seek to work with China to stretch to more ambitious targets.” The truth is that a failure to improve relations with China and Russia would simply prompt them to work more closely with each other—and against America.

For all Biden’s promises to restore American leadership—a decorous word for predominance—the era of liberal interventionism is likely over. Trump tried to bury it; Biden may sign the death certificate. It is notable that he did not award top foreign policy positions to Samantha Power or Susan Rice, both of whom were intimately involved in what Barack Obama later called his “worst mistake”—leading NATO forces into Libya in 2011 to carry out regime change. Biden, who argued against a surge of American troops into Afghanistan during the Obama administration, seems unlikely to have much appetite for new military adventures abroad. Biden has a valuable opportunity not simply to attempt to revert to the past, but to forge a path forward that subordinates hubris to realism. It can’t come too soon. America, long in the habit, as David Bromwich notes, of viewing itself either as a messianic or evangelical nation, is faltering. At a moment when America is reeling from a pandemic, economic collapse, and racial strife, its very democracy and unity are coming into question. Biden should seek to do well at home before trying to do good abroad.