Can Kazakhstan be America's New Partner in Central Asia? 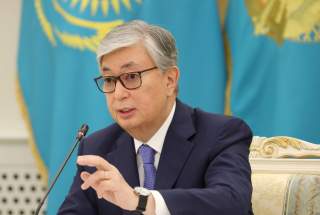 Change has come to Kazakhstan, at last.

The former Soviet republic’s first president, seventy-nine-year-old Nursultan Nazarbayev, stepped down in March after nearly thirty years in power. His successor, Kassym-Jomart Tokayev, won the post in last month’s elections, racking up 70 percent of the vote.

The election process, albeit imperfect, was Kazakhstan’s most legitimate yet. (In the previous election, for example, Nazarbayev won with a reported 97.7 percent of the vote.) Just as Important was what didn’t occur. Many had expected the Nazarbayevs to attempt a family power grab; it never transpired.

President Tokayev has a full in-box. His country suffers from corruption, social unrest and a weak economy. Keenly aware of these problems, his inauguration speech outlined not just three, or five, but ten priorities for reform.

There is no reason to assume that Tokayev will change Kazakhstan’s engagement with the United States, which has long been cordial and cooperative.  Therefore, the Trump administration should work closely with him to find ways to improve U.S.-Kazakh cooperation on mutually beneficial issues. After all, the National Security Strategy states that the United States will “seek Central Asian states that are resilient against domination by rival powers, are resistant to becoming jihadist safe havens, and prioritize reforms.” This sums up Kazakhstan.

As the United States engages with Tokayev, it will try to craft a bilateral relationship along the lines of a four-legged chair, with the legs being security, energy, governance and economics. As with any chair, if one leg is longer than the other, it wobbles. This can be the same for the relationship.

To date, the security relationship has been the strongest for the United States. Kazakhstan has been a helpful partner in Afghanistan, investing tens of millions of dollars in economic and educational projects there. Perhaps most importantly, Kazakhstan is an integral component of the resupply network for U.S. troops in Afghanistan.

While the so-called Astana process has produced mixed results and has not delivered an end to the fighting in Syria, Kazakhstan should be praised for taking the diplomatic initiative to host these talks in order to help try bringing an end to the Syrian Civil War. As a secular, Muslim-majority country, Kazakhstan has been an active partner in fighting Islamist extremism. And, because of its experience as the nuclear weapons test site for the Soviet Union, Kazakhstan has a natural inclination to support nuclear non-proliferation and disarmament initiatives.

On the energy front, U.S. companies have been investing and operating in Kazakhstan for decades. The country also has the potential to play a major role in helping America’s European allies break their dependency on Russian oil and gas.

Last year an agreement on the legal status of the Caspian Sea cleared away a major barrier to building a Trans-Caspian Gas Pipeline to connect the eastern and western shores of the Caspian. Kazakhstan should work closely with Turkmenistan and Azerbaijan to make this project a reality.

Also of note: Kazakhstan’s Kashagan oil field is increasing production this year. Russia’s Caspian Pipeline Consortium likely will be unable to handle all the extra volume. Kazakhstan could choose to transport its additional oil via the Baku-Tbilisi-Ceyhan pipeline, which has spare capacity and bypasses Russia. This also could help reduce Europe’s dependence on Russia, and the United States should encourage Kazakhstan to make that choice.

In terms of economic engagement, the United States should always be looking at new ways to deepen its involvement in the region. China and Russia are both engaged there, and there is no reason why Washington should shy away from the competition. Investment opportunities in Kazakhstan’s energy sphere run in tens of billions of dollars, and there is potential for more. U.S. trade activity with Kazakhstan totaled more than $2.2 billion in 2018, while investments exceeded $5 billion. Obviously, there is tremendous room for growth in both categories.

Finally, American policymakers need to be cautious about how they approach governance reforms in Kazakhstan. For U.S. interests in Central Asia, there are two important factors: stability in the system of government and the improvements in the system of government. The U.S. needs a stable and secure Kazakhstan that has the ability to balance its role in the region. As for governance, it is important that Kazakhstan continues heading in the right direction, but at a pace that is appropriate and comfortable for the majority of its citizens.

Some Kazakhstanis are unhappy with the slow pace of democratic reforms, resulting in a recent spate of protests. But it is important to recognize that, in a country with a population of eighteen million, the protests at their peak drew only several thousand protestors.

U.S. policymakers should not fall into the same trap that caught many during the Arab Spring, when street protests were misunderstood and used to encourage drastic governance reforms at a pace much faster than was realistically doable. The result was a wave of instability and conflict in many places across the Middle East and North Africa. The United States does not need a repeat of this in Central Asia.

Since gaining independence from the Soviet Union in 1991, Kazakhstan’s movement toward democracy has proceeded, at times, at a snail’s pace. Yet, over time, it has been heading in the right direction.

Considering the bigger geopolitical picture, it is clear that the peaceful transition from Nazarbayev to Tokayev can serve U.S. interests. While the United States should encourage reforms, it should do so in a reasonable, responsible and realistic way. And President Tokayev's stated commitment to reforms and first steps in that direction in only a few weeks in office open the door for just such cooperation.

President Trump should move swiftly to schedule a trip to Kazakhstan. Now’s the time to show that the United States is serious about the region.

Luke Coffey is the director of The Heritage Foundation’s Allison Center for Foreign Policy.