Can This Man Keep Europe Out of Another Crisis? 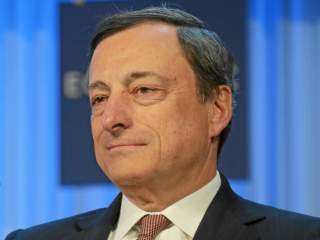 Since 2010 Europe has gone from one crisis to another. From that year forward Greece defaulted on its debt and rocked global financial markets; Scotland voted on its future status as part of the United Kingdom and opted to remain; a new Cold War developed with Russia; and waves of Middle Eastern and African migrants threatened to swamp Europe’s social systems.

In early 2016, Europe is being hit by another round of turmoil. It appears the eurozone countries are heading into a new bout of financial crisis, with the risk that it morphs into another round of European sovereign debt crisis, all at a time when the global economy is threatening to stall.

Europe’s financial crisis roiled global markets from 2010 to 2012, during which time Greece, along with Cyprus, Portugal, Ireland, Spain and Italy, threatened both to sink the single currency union constructed around the euro and to upend the Europe-wide banking system.

The crisis was profound and plunged a number of economies, especially those in the Southern periphery, into severe recessions and biting austerity programs. In many cases, governments were forced to step up to guarantee the survival of their banks, in the process absorbing considerable new liabilities that exploded budget deficits and raised public sector debt.

The slide was halted by the European Central Bank’s president, Mario Draghi, who pledged to do “whatever it takes” to defend the member states of the eurozone against speculative attack. Although Greece continued to be a sovereign crisis flashpoint through most of 2015, the ECB’s quantitative easing (QE) program and other policies stabilized European and global markets.

Although recovery was slow, real GDP for the eurozone regained traction with real GDP growth going from 0.9 percent in 2014 to 1.5 percent in 2015. As well, the ECB’s QE program helped bolster European financial markets, and on the surface it appeared that the financial crisis was well over—at least until it re-appeared in early 2016.

The reasons for the return of the European financial crisis include an erosion of faith in the ECB and Draghi to continue to keep Europe out of crisis, a failure to maintain credible momentum on economic reforms (Greece and Italy come to mind) and the rise of political opposition to structural economic changes by publics hit by austerity fatigue (Greece and Spain stand out).

Confidence in the ECB is also eroding by the failure to clean up European banks’ balance sheets, which has left investors increasingly worried about the real state of loan portfolios. And then there are external factors (such as the collapse of growth in emerging markets, not least in China) that are a drag on economic growth prospects throughout the EU.

Global equity and debt markets are clearly sending a signal that Europe’s financial crisis is returning. In February, Germany’s largest bank, Deutsche Bank (DB), saw its stock and bond prices ruthlessly pummeled by nervous investors. Indeed, on February 8 DB’s stock was down close to 30 percent for 2016 and down 46 percent since its high in July 2015. The bank’s performance has been poor, with DB suffering losses of 6.8 billion euros for 2015, its first full-year loss since 2008.

Like a number of large European banks, DB’s problems are rooted in slow economic growth, ongoing litigation costs, increased capital and compliance costs, and worries over loans. The situation is not helped by the lack of profitability and poor transparency and disclosure over the bank’s derivatives exposure. All of this focused attention on DB’s CoCo bonds (Contingent Convertible bonds), which are the highest yielding of bank bonds, but also would be the first a bank would default on if under dire stress.

In response to the plunging value of its securities, DB moved to show that it was solvent and acted to repurchase $5.4 billion of its senior debt. Top management was forced to put out claims that the bank was “rock solid.” Even the German Finance Minister Wolfgang Schauble was brought into the act for reassurance, stating that he had “no concerns” about DB.

However, the fact that investor concerns focused on Germany’s largest bank is not a positive development. This was brought home by the newspaper Frankfurter Allgemeine Zeitung: “What is one to think of a bank that has to promise its customers and investors that it is able to pay back credits? How solid is a bank that has shed a third of its shareholder value in a month, and half of it over the course of a year? It’s no longer just the customer of a couple of Greek banks that are asking such tough questions, but the customers of Deutsche Bank.”

Although DB’s stock subsequently regained some of its value, problems on the European banking front remain.

Italian banks are a major worry. With real GDP growth a meager 0.1 percent in Q4 2015, the economy is not in great shape and most banks are not in a position to make fresh loans. In fact, Italian banks are seeking to offload an estimated 330 billion euros of non-performing loans by working with the Italian government to securitize the debt and find private buyers. There is a sense of urgency as, according to the Financial Times, non-performing loans equal 17 percent of total loans and roughly the same amount of Italy’s GDP.

Italy is not alone in its problems. Spain continues to lack a government since the inconclusive December 2015 elections, Portugal’s government has swung to the left with looser fiscal policies, and Ireland is off to elections on February 26. Greece is once again in the throes of negotiations over reaching a new agreement with its official creditors. Pension reform is only one battle of many on the Greek front and the Tspiras government retains a very small majority in the parliament. Meanwhile in Greece, social unrest continues and the economy has fallen back into recession.

There’s more. The British referendum on whether to remain in the EU looms and Chancellor Angela Merkel’s position is seen as increasingly precarious in the face of rising German discontent over migration. A Brexit and Merkel’s departure from the helm of Germany could be potentially disruptive to both markets and economic policymaking at a critical time.

In all, the European financial crisis is reappearing at a time when the ECB has fewer policy instruments to wield and the EU is feeling pressure on a number of fronts. Negative interest rates currently in vogue in a number of the northern and more creditworthy countries are not going to be a salvation as that policy carries its own set of financial hobgoblins. Buying “bundles of bad debt” from Italian banks by the ECB (something under discussion) and large banks buying back their senior debt and equity may help shore up the leaky boat of European finance in the short term, but the major structural problems pertaining to public and private debt reduction and stimulating self-sustaining economic growth still need to be addressed. More risk and market turmoil looms ahead as Europe grapples with the next round of financial crisis.