Can This Man Win Movement Conservatives for Trump? 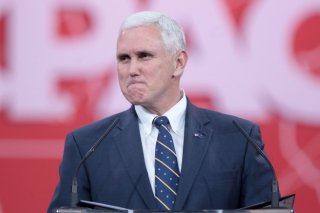 Donald Trump is many things, but a movement conservative isn’t one of them. His new running mate, Indiana Gov. Mike Pence, is, and that’s a major reason he is now on the Republican ticket.

The remaining opposition to Trump at the Republican National Convention comes not from the party establishment, which has largely resigned itself to his nomination, but conservatives who feel the businessman has denied them their chance to win the presidential nomination this year.

Finding a committed conservative who has gubernatorial as well as congressional experience isn’t as easy as one would think twenty-seven years after Ronald Reagan left office. When you throw in the facts that Pence has never been “Never Trump” and has no real history of scandal, it becomes easy to see how he made the cut.

The trouble is that Pence is a good example of why it is so hard to find movement conservative governors. In Congress, he was a leader for limited government at a time when George W. Bush and fellow congressional Republicans were on a wild spending spree.

Pence voted against No Child Left Behind and the massive deficit-funded Medicare prescription-drug benefit. He led the opposition to the Wall Street bailout in the House. He worked to offset Hurricane Katrina relief spending with budget cuts elsewhere.

The one significant exception, unfortunately, was the biggest budget buster of the Bush era. Pence did vote for the Iraq war. But that was true of all but seven GOP members of Congress. Most conservatives supported the invasion at the time. Trump is at least an upgrade in that area.

As a member of Congress, Pence was a shining example of conservative purity—with the exception of an immigration compromise that foreshadowed his future attempts to split the baby on contentious issues.

In 2006, while the Senate was trying to advance “comprehensive immigration” reform rejected by anti-amnesty, enforcement-first members of the House, Pence floated a convoluted third way forward.

Illegal immigrants could be legalized after “touching back” in their home countries, where they would be vetted by private sector “Ellis Island centers” and then readmitted. Comprehensive reformers found this approach convoluted, enforcement-first conservatives thought it was a thinly veiled amnesty (it’s why conservative columnist Ann Coulter, an immigration restrictionist, called him “the combo-platter of disaster”).

What was a one-off as a member of Congress became something of a habit as governor. Pence attempted to find middle ground on accepting Obamacare’s Medicaid expansion and pulling Indiana out of Common Core. He once again ended up angering people on both sides of the debate.

On Medicaid, for example, Pence pitched his plan as a free-market alternative Obamacare’s expansion of the entitlement program. But the bottom line was that he embraced the growth of a government program with debatable health benefits to the tune of billions of taxpayer dollars, alienating many conservatives who once viewed him as a champion of limited government.

This was disingenuous, but many came to believe that Indiana was allowing businesses to systematically refuse to serve gay people. Pence was unable to change the narrative. In fact, he seemed utterly unprepared for the firestorm of criticism and boycotts that followed.

Once again, Pence supported a religious liberty compromise that pleased neither side. Long a hero to social conservatives, many now angrily regard him as capitulating on religious freedom in exchange for nothing.

Ahead of the Indiana Republican primary this year, anti-Trump conservatives hoped he would play a role similar to Wisconsin governor Scott Walker and actively work against the businessman in his state. Pence did endorse Ted Cruz, but only tepidly and mixed with lots of praise for Trump.

It’s probably a big reason Pence is on the ticket with Trump and Walker isn’t. But it didn’t endear him to anti-Trump conservatives and it’s one of the reasons Pence isn’t as helpful to Trump as he might have been in his congressional prime.

Some of this no doubt reflects the difficulties of governing as a conservative in a state executive position rather than voting in the House. A congressman can have as pure a record as he wants, but a governor must sometimes compromise.

Many conservatives take a different lesson from Pence, however. They see someone who they thought was principled but sold them out. A lot of Republicans feel that way about their party. That’s why Trump is the man at the top of the ticket.