Can the Middle East Avoid the Coming Climate Disaster? 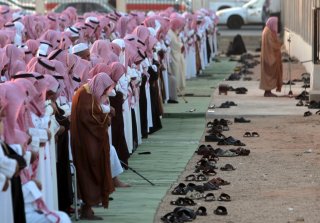 The Middle East has a severe climate problem. According to a recent International Monetary Fund report, the average temperature in the region has risen by 1.5 degrees Celsius (2.7 degrees Fahrenheit) since 1990, which is more than twice the global average. On top of that, countries there and in Central Asia account for nearly half of the fifty countries most prone to “extreme heat events” (periods of excessive temperatures and humidity). Further temperature increases are expected, with adverse economic, environmental, and societal consequences for the region.

For example, in 2019, the United Nations sounded the alarm of a coming era of “climate apartheid,” wherein extreme temperatures and prolonged heatwaves threaten to “‘undo the last 50 years’ of development, global health and poverty reduction” and impoverish millions. This new reality will be particularly consequential for the Middle East, which has already been struggling to address electricity shortages, economic inequality, and human harm intensified by lengthy heatwaves with record temperatures. These pains are likely to have a pronounced economic effect: as the IMF reports, “Even in a moderate emission scenario (RCP 4.5) that limits global warming to 2-3 [degrees Celsius] by 2100, mortality-related costs [the cost of deaths and adaptations on society] … could reach an average of 1.6 percent of GDP per year during 2040-59.” And the situation is even grimmer for the region’s hottest countries—such as Bahrain, Djibouti, Mauritania, Qatar, and the United Arab Emirates. The IMF says that these nations could see an “immediate decline in per capita economic growth of around 2 percentage points” for every “temperature increase of 1 degree Celsius.”

Of course, it is not just rising temperatures but also declining precipitation rates that are exacerbating the region’s challenges. Indeed, decreasing annual precipitation rates are aggravating the Middle East’s water crisis, which is one of the world’s worst due to the region’s arid climate and years of state governments mismanaging their water resources and subsidizing water-intensive agriculture and animal husbandry. Adapting to the coming climate emergency will greatly burden the Middle East and North Africa (MENA), a region that uses, on average, more than four times of its available freshwater resources and is home to twelve of the seventeen most water-stressed countries in the world. 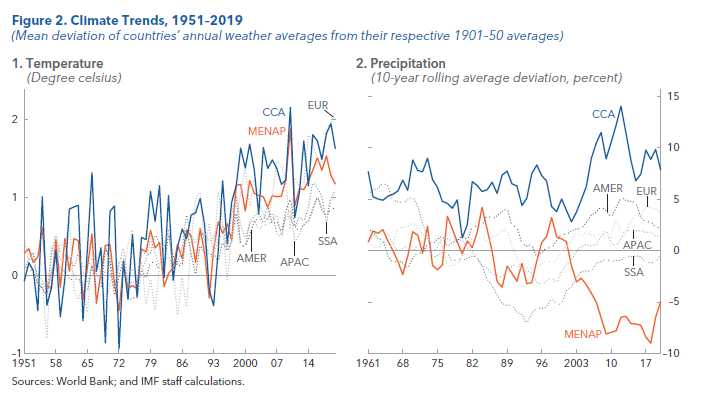 As a matter of fact, MENA countries are vulnerable to more than their precipitation problem: on average, these countries receive over half of their total renewable water resources (i.e., rivers) from sources outside of their borders. The IMF’s warning that this external dependency “amplifies the risks of regional water disputes and refugee flows” is not theoretical. Indeed, we have already seen Egypt threaten military action to stop Ethiopia’s hydroelectric projects from reducing the Nile River’s downstream water supply—which provides 97 percent of Egypt’s renewable water resources. Likewise, disputes over “hydro-politics” have raised the risk of interstate conflicts between nations such as Israel and Palestine; Iran and Afghanistan; Syria, Iraq, and Turkey; and India and Pakistan. Water and its associated infrastructure have also been weaponized and targeted in the Syrian Civil War, the Iraq War, and the war in Yemen by both state and nonstate actors. Moreover, the increased likelihood of drought and rising heat could incite additional violent uprisings and reprisals, much as how we saw unprecedented droughts catalyze seismic events such as the 2010 Arab Spring, the 2011 Syrian Civil War, and the protests that wracked Iran in 2021. While water is not always the primary cause of instability and war, it is increasingly becoming a part of competition and conflict in this desiccated region.

When these trends are analyzed along with the growth of the MENA population (which is expected to double by 2050), it becomes difficult to overstate how dire the situation is. Today, over 60 percent of the MENA population has little or no access to drinkable water and, according to a 2020 report by the United Nations International Children’s Emergency Fund, nearly nine out of ten children are suffering health and nutritional consequences because they live in areas of “high or extremely high water stress.”

Consequently, in a business-as-usual scenario, we are likely to see these trends provoke economic and climate migrants and refugees to flee the region, further undermining the region’s stability and economic prospects. This will become more apparent in the aftermath of more frequent and more intense climate disasters such as floods and droughts. In fact, according to the IMF, in every year since 2000, climate disasters have killed over 2,600 people, affected 7 million others, and cost $2 billion in direct damages—reducing regional economic growth by 1-2 percent per capita—in the Middle East and Central Asia. Higher temperatures, erratic rainfalls, and rising sea levels will only make these disasters worse and occur more frequently over time. Projections suggest that swaths of currently populated MENA areas could be uninhabitable before the end of the century.

Egypt’s coastal city of Alexandria offers a sobering vision of the region’s future. Home to five million people and 40 percent of Egyptian industrial capacity, Alexandria is surrounded by the Mediterranean Sea on three sides. As the Associated Press reported in 2019, tidal waters are threatening the city’s poorer neighborhoods and eroding its tourist-laden beaches. Egyptian officials have reported that sea levels are currently rising by 3.2 millimeters per year, 52 percent faster than they were before 2012 and 77 percent faster than they were in 1993. The UN Intergovernmental Panel on Climate Change has warned that global seas could rise by one to three feet by 2100. If these worst projections come true, not just Alexandria would be inundated: as Geoffrey Kemp et al. wrote in 2018, more than 60 percent of the Nile River Delta, where about one-quarter of Egyptians live, could become infertile due to saltwater inundation; another 20 percent would be completely submerged. Reuters reports that flooding in the Nile Delta, which is known to be the country’s breadbasket, could respectively cut rice and wheat production by 11 percent and 15 percent by 2050. There is little the Egyptian government can do except buy into costly mitigation plans that seek to erect physical barriers to keep rising seas at bay.

While Egypt’s particular challenges are unique, the conditions that Cairo must contend with and the solutions it must embrace are not. To be sure, regional governments and the international community alike must aggressively invest in mitigation and adaptation strategies to spare the millions of people across the MENA region who live in low-elevation coastal areas from the worst impacts of climate change. Cairo recognizes this, and, in 2020, Egypt became the first country in the Middle East to issue a sovereign green bond to incentivize investment in environmentally sustainable projects (which it expanded after the bond was more than seven times oversubscribed). Similar government initiatives that incentivize environmentally sustainable investments could serve as a model and a signal to other countries and private financers. Furthermore, it suggests that while the costs of mitigation and adaptation reforms will be high, this transformation could be sold as an economic opportunity for the region. This may be the best way forward, as the price of inaction is immeasurable.