Can NATO Pay Up? 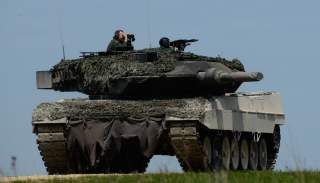 In recent years NATO has been showing renewed signs of vitality. But with challenges ranging from Russia to refugees, it’s also struggling to strengthen its cohesion. And despite promises of more spending on defense, most of NATO’s members lag on their commitments to defense spending. With Donald Trump in the White House, the issue of European allies’ defense spending will almost certainly acquire new urgency.

A security alliance needs credible security resources: NATO asks its members to spend 2 percent of their GDP on defense. But this year, only five countries—the United States at 3.61 percent, Greece, the United Kingdom, Estonia and Poland—are meeting NATO’s 2 percent benchmark. Despite recent defense spending increases in several countries, including Latvia and Lithuania most, of their allies don’t even come close to the 2 percent mark. Canada, for example, is spending 0.99 percent of its GDP on defense. Germany is spending 1.19 percent, Italy 1.11 percent and Spain 0.91 percent. The United States accounts for 70 percent of NATO’s defense spending. “There has been a shift in attitudes among European allies over the past several years,” said Ian Brzezinski, deputy assistant secretary of defense for Europe and NATO policy under George W. Bush. “We shouldn’t overstate it, but we also shouldn’t understate it. The question is whether it will continue. There’s emergent recognition in Europe that it has to do more and spend more to sustain the transatlantic bargain.”

Just like a subway train that drives even if some of its passengers have dodged the fare, NATO is functioning. But some allies’ perceived lack of willingness to share the joint burden is irritating some allies, especially the Americans. Last month at the Riga Conference, a major security conference, U.S. deputy assistant secretary of defense Michael Carpenter again reiterated U.S. calls for more allies to increase spending. And this summer, Trump said that under his leadership the United States would defend the Baltic states only if he deemed that the countries had “fulfilled their obligations to us.”

Marko Mihkelson, chairman of the Estonian parliament’s defense committee, told me that “the U.S. accounting for 70 percent of NATO defense spending is firmly out of balance. What sort of alliance is it where all the allies depend on just one country?” In Estonia’s parliamentary defense committee, Mihkelson said, members of all the parties show a “rock-solid” commitment to 2 percent defense spending. “We take our commitment to the alliance extremely seriously,” he explained. “It’s our key defense. We can’t have all military capabilities, and even if we did, we would not be able to deter threats alone.” Next year, Estonia is planning to increase defense spending to 2.17 percent, though Mihkelson admits that there may not be complete parliamentary support for spending above 2 percent.

Here’s the twist: the 2 percent benchmark is a crude tool. If a NATO member goes on a sudden spending spree it won’t make the alliance more effective—on the contrary, it may simply add clutter to NATO’s combined arsenal. And, a former senior military official in a major European NATO country told me, what counts is not a country’s volume of gear or number of soldiers. What’s decisive, he said, is this: “Do they actually promote interoperability, or hinder it by pandering to local defense manufacturing interests? Do they actively facilitate transits and exercises? Do they spend too much on personnel and too little on equipment?” What counts more is a country’s willingness to pitch in and be good team players. Within the North Atlantic Council and NATO’s military committee, the senior military official explained, “there’s a sense of a nation’s stock price at any given moment based on a number of factors: are they filling their staff posts in NATO HQs, are they contributing effectively or tokenly to operations, does their company or battalion contribution actually add capability or does it simply load up other nations’ logistics chains, usually the Americans’ logistic chain?”

Retired admiral Giampaolo di Paola, a career naval officer who served as Italy’s minister of defense between 2011 and 2013, also argues that 2 percent is an inaccurate measurement. “And for many countries like Italy that live under severe fiscal constraints, 2 percent is currently not achievable,” he told me. “The benchmark has a political purpose, but it needs to be accompanied by specific [operational] capabilities.” With undeniable justification, di Paola argues that Italy is showing its commitment to joint security by virtually single-handedly policing the Mediterranean and rescuing refugees adrift there. That is indisputably a better commitment to joint security than, say, procuring tanks from domestic suppliers.

That’s NATO’s dilemma: if adherence to the 2 percent benchmark is not a good measurement of commitment, what is? Here’s an example: the upcoming exercise Saber Guardian 17, which will involve some thirty thousand troops from eleven countries. In addition to “2 percent,” operational contributions are certain to emerge as a key measurement of NATO solidarity. But 2 percent has the distinct advantage of being catchier and simple to measure.