Can Netanyahu Solidify the Right in Israel's New Elections? 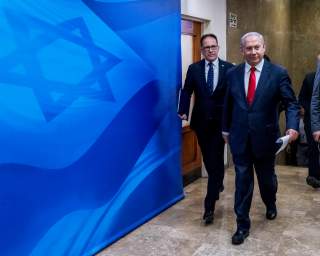 Israeli politicians negotiated until midnight on May 29 before deciding to dissolve the Knesset, Israel’s parliament, and hold new elections. In a momentous decision for Prime Minister Benjamin Netanyahu, who has been in power since 2009, the country will vote in September, just months after April elections were held. It could be a defeat for the powerful Israeli leader, but it also represents another attempt to cling to power and outmaneuver his rivals.

Israel faces challenges in the region which make its political instability at home a pressing concern. First among Jerusalem’s concerns is the rise and influence of Iran. Iran’s allies in the Syrian regime, Hezbollah in Lebanon, Shia paramilitaries in Iraq and the Houthis in Yemen all stridently oppose Israel. Hassan Nasrallah, speaking at an annual celebration of Israel’s 2000 withdrawal from Lebanon, said his movement would lead efforts to oppose both the U.S. peace plan and Israel’s presence in the West Bank. Yemen’s Houthis curse Jews and Israel in their official slogan. Shia militias in Iraq, such as Kata’ib Hezbollah and the Badr Organization, regularly claim that they are opposed to the United States and Israel, the latter of which they tend to blame for recent tensions between the United States and Iran.

At the same time, Washington is pushing a new peace plan and President Donald Trump’s advisor and son-in-law Jared Kushner arrived in Israel with negotiator Jason Greenblatt as Israel announced new elections. Jerusalem was supposed to have a stable government ahead of the roll-out of the “deal of the century” and before the June 25 Bahrain meeting that is meant to drum-up financial support for the plan.

Netanyahu’s inability to form a coalition government can be seen as a defeat, but he had ample opportunities to avoid it and allow other scenarios to develop. That means that the prime minister saw this as the least bad option. Israel’s coalition politics are complex, with no party receiving anywhere near a majority of seats in the Knesset. Netanyahu’s Likud and his main rival former Israeli Defense Forces Chief of Staff Benny Gantz’s Blue and White party both received thirty-five seats in the April 2019 elections. Many of the parties on the center-right and Right had vowed to work with Netanyahu again as they have in past governments. This included the two ultra-Orthodox parties, former Defense Minister Avigdor Lieberman’s Yisrael Beiteinu and Moshe Kahlon’s Kulanu. But Leiberman demanded that Netanyahu’s new coalition deal with the controversial issue of exempting ultra-Orthodox Jewish men from the military draft.

All politics is local and in Israel the failure to form a government resulted from an inability of Lieberman, Netanyahu and the Orthodox to compromise. This came as a surprise to many voters and the media. On Saturday, May 25, the spotlight had been on a protest by one hundred thousand Israelis in Tel Aviv against plans by Netanyahu to seek immunity from looming corruption indictments. Days later it was clear that new elections were on the table.

Now Netanyahu has several challenges ahead of him. One will be to keep the voters convinced of his narrative. On May 29 he said that the Israeli people had voted for a right-wing government and that Lieberman had torpedoed the possibility to construct one. Netanyahu’s goal in the next elections will be to reduce Lieberman’s party’s chances of passing the threshold. Already it had only four percent of the vote. Two smaller right-wing parties, Zehut and New Right failed to make it over the threshold in the April elections. With slightly different voter turnout they might make it in and Lieberman would be out. That will be Likud’s goal. It will also seek to continue to weaken the center and left. Israel’s Labor party received a dismal six seats in the April elections, an all-time low.

For ten years the Israeli leader has outplayed his rivals. He has used the country’s coalition politics to sideline rivals or split parties. Likud once even came in second in the 2009 elections and still formed a government. He has partnered with rivals over the years, eventually weakening them in the process. This included Yair Lapid’s Yesh Atid party, Labor’s Ehud Barak, Kadima’s Shaul Mofaz and Lieberman Yisrael Beiteinu, all of whom at one time or another received positions in a Netanyahu government between 2009–2019. Barak and Mofaz are now out of politics and Lapid and Beiteinu appear to be bitter critics of the Israeli leader. “We won’t let him destroy the country,” Lapid said on May 25.

For the next months, Netanyahu will be able to govern as he has in the past, with the same allies from the last Knesset. In addition to being prime minister, Netanyahu is also the minister of defense and health minister. This is an incredible concentration of power, and it is how Netanyahu has positioned himself. Netanyahu even served as his own foreign minister from 2015 to 2018.

On May 30, Kushner and Greenblatt were in Jerusalem on the heels of their trip to Morocco and Jordan. Saudi Arabia and the United Arab Emirates have expressed support for the U.S.-backed Bahrain summit to encourage investment in Palestinian areas. Qatar, which has been in a dispute with a Saudi-led coalition since June 2017, is sending a rare delegation to Saudi Arabia for a regional summit. This is important because Qatar is a major financial backer of the Gaza Strip, which is run by Hamas. If the United States can find a way to get more unified Gulf support for the Palestinian Authority in Ramallah and affect change with Hamas in Gaza, then it would have major ramifications.

Israel is a key to this and unstable politics are the last thing that the United States expected in Jerusalem. In a rare intercession in local politics, President Trump wrote on May 27 that he hoped Israel’s government coalition formation would go ahead so that Trump could “continue to make the alliance between America and Israel stronger than ever.” Greenblatt, the Special Representative for International Negotiations, even tweeted a photo at the Kotel, a central Jewish religious site in Jerusalem where he wrote that there was “lots to pray for.”

In the past, Netanyahu has been skeptical of peace plans. His first term as prime minister in the late 1990s was dominated by simmering conflict with the Palestinians. He came into office in 2009 after having opposed the 2005 decision to withdraw from the Gaza Strip.  Although he has said he extends his hand in peace, in speeches in 2009 and 2011, he tends towards a conservative and cynical view of the chances for peace. This means that the summer of 2019 before new elections will put Netanyahu in a complex place. He doesn’t want to openly oppose Trump’s peace push, but he prefers that the United States continue its focus on the Iranian threat, an issue Netanyahu has spoken about for years. Israel will seek to avoid another major round of fighting with Gaza, as it has sought to do for the last year.

Netanyahu also faces a closing window of opportunity to oppose Iran’s presence in Syria. Israel’s former IDF Chief of Staff Gadi Eisenkot revealed in January that Israel has struck thousands of Iranian targets in Syria over the years. In recent months Israeli airstrikes have continued, with an airstrike on a Syrian air defense vehicle on May 27. Russia, a backer of the Syrian regime in Damascus, has warned Israel about its airstrikes in the past. Now Israel, Russia and the United States have scheduled a trilateral meeting in June that will include National Security Advisor John Bolton, Russian Secretary of the Security Council Nikolai Patrushev and an Israeli representative. Netanyahu and Russia’s President Vladimir Putin have met frequently over the last five years, most recently on April 4.

These are the calculations that Netanyahu saw when choosing between establishing a weakened coalition with small parties bickering with one another that could topple his government, or having elections or allowing Gantz to try to form a government. For Netanyahu, new elections are an opportunity to solidify his right-wing bloc of parties. He also seeks to continue in his post through the difficult summer months in which Israel may face challenges in Gaza, the West Bank, the north with Hezbollah and also with Iranian influence in Syria and neighboring areas.