Can Obama Rebuild the Democratic Party? 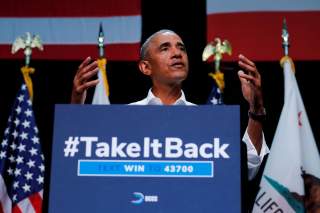 Barack Obama is many things to many American people. To the far-right fringe of the Republican Party, the former president was one of the most dangerous men to the American Republic ever to hold the highest office in the land, a liberal wolf who apologized for America at every opportunity. To the average Democrat, Obama was the savior who turned the country’s economic malaise around and re-introduced the American people to hope after eight years of Republican governance. And to many in the middle, the 44th president was a mixed-bag like others that came before him.

But whether you love him or hate him, political prognosticators on both ends of the political spectrum agree that Obama was a talented campaigner who was tireless in his efforts to sell himself to American voters. While those who worked for the former president typically described him as a somewhat insulated, anti-social policy wonk who didn’t particularly care for the glitz and glimmer of Washington politicking or catering to the donor class, it’s a near-indisputable fact that Obama was an inspiring, hard-working, and at times gregarious politician on the stump. Just ask advisers of the late John McCain or 2012 GOP presidential nominee Mitt Romney, and they’re likely to say the same thing.

For the most part, Obama has been quiet since he left the White House. In the age of Donald Trump, when everyone is expected to react to every single tweet, outburst, or conspiracy-laden comment that comes out of the Trump White House, Obama has been relatively subdued. When the offense is egregious enough—like Trump’s botched press conference about the white supremacist clashes in Charlottesville over a year ago—Obama will respond with a statement or a short tweet telling Americans not to lose sight of their better angels. But, perhaps recognizing the divisiveness he causes amongst Republicans in general, the 44th president has mostly stayed away from critiquing the 45th. This is likely not because he doesn't want to, but because he likely realizes such comments would only further excite Trump's core supporters.

But 2018 is no ordinary year. Voters will be waiting in line to cast their ballots in roughly two months for a new Congress. And while the polls show Democrats in good shape (an August 26-29 Washington Post/ABC News poll puts Democrats fourteen points ahead of their Republican counterparts in the generic ballot), the party would be making an atrocious mistake if it assumed it could simply ride the anti-Trump wave into November without doing the leg-work of door-knocking, handshaking, and making speeches.

Other than Barack Obama, there is no politician in the Democratic Party's roster who possesses the popular support, stamina, credibility, and god-like mythology powerful enough to attract all facets of a fractious Democratic electorate. Indeed, during a period where upstart, hard-left progressives are slugging it out with more establishment politicians of the left-of-center mold in Democratic primaries from the suburbs of Kansas City to Queens NY, Obama is one of the only national political figures in the party today who can bring all corners of the tent together.

Obama understands this well, which is why he is set to hit the trail yet again for Democratic candidates up and down the ballot this fall. Last Friday, Obama’s eviscerated his successor as taking America’s very decency off the cliff. And on Saturday, in his first midterm campaign event, Obama—joining seven California Democratic candidates hoping to nudge Orange County into the blue—warned the Democratic faithful in Anaheim about what can happen when voter apathy spreads like a plague over the party’s members.

If Democrats have a chance at flipping the twenty-three seats they need to retake the House majority, the party will need to knock those GOP incumbents and candidates who represent districts that Hillary Clinton won in 2016. A House victory for Democrats runs straight through places like Orange County, the Florida suburbs, and the traditional Democratic constituencies of the Rust Belt. Obama proved victorious in much of this territory until Trump took it for Republicans in 2016.

Obama stumping for Democratic politicians, though, is not just about helping out his old pals. This is also an opportunity for the former president to help in the party's rebuilding. Throughout Obama's two terms, Democrats nationwide were obliterated. Outside Washington, around 1,000 state legislative seats were stripped away from Democratic control, and Republicans picked up twelve governorships. While Obama did well campaigning for himself, the rest of his fellow Democrats weren’t nearly as fortunate; by the time Obama left office, the Democrats were at their weakest in close to a century. It wasn’t all Obama’s fault, of course, but there were grumblings that he failed to step up when the party needed him.

The 2018 midterms could be Obama’s shot at redemption in his attempt to help mitigate some of the electoral damage that he left behind after eight years in Washington. This naturally means getting out on the stump, fueling the Democratic base, raising millions of dollars for the party for advertising, and convincing moderates or Republican voters exhausted from Trump mania that sending a Democrat to Congress is the only way the Trump administration will be held accountable. And, if Obama’s success riles up Donald Trump in the process and obstructs his legislative agenda for the remainder of his term, so much the better.

Daniel R. DePetris is a political columnist based in New York City and a frequent contributor to the National Interest.