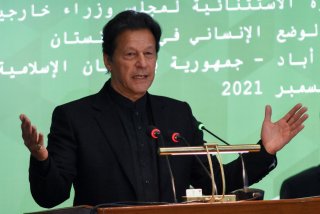 Global perceptions are hard to undo. Especially when they have fossilized over time. With its fate tethered to Afghanistan because of allegations of resurrecting the Taliban back into power, Pakistan faces the gargantuan task of convincing the world about its intentions towards Afghanistan and, in turn, restoring its hemorrhaged global image.

But, the Seventeenth Extraordinary Session of the Organization of Islamic Cooperation (OIC) Council of Foreign Ministers, held in Islamabad on December 19 to draw global attention to the catastrophic humanitarian crisis unfolding in Afghanistan, offers a ray of hope to Afghanistan and gives an opportunity to Pakistan to rework its global image—something it has struggled to do over the years.

The OIC summit was Pakistan’s initiative through the convening power of Saudi Arabia—the heavyweight of the Muslim World. The summit was ostensibly well received and saw participation by envoys and representatives from fifty-seven Islamic countries, P-5 countries, various international organizations, financial institutions, and the United Nations.

This was the first-ever mega event in Afghanistan to find a way out of the catastrophic humanitarian crisis unfolding there. With the country on the brink of a collapse and more than half its population in dire need of humanitarian assistance, Afghanistan is poised to become the world’s biggest humanitarian crisis. Making matters worse, in August this year, much of Afghanistan’s Central Bank’s $10 billion in assets were frozen by the United States in retaliation for the Taliban takeover of Afghanistan. The United States has conditioned the release of these assets on the Taliban demonstrating respect for the rights of women and children and the rule of law.

Pakistan would be directly impacted by the economic meltdown in neighboring Afghanistan. Having sheltered close to 3.8 million refugees displaced after the Cold War, and with its own struggling economy, the last thing Pakistan can afford is a collapsed Afghanistan causes a further refugee influx into its territory.

The OIC summit was, therefore, understandably peppered with Pakistan’s plea for assistance to Afghanistan. Pakistan’s Prime Minister Imran Khan called the summit “an expression of solidarity with the Afghan people” and asked the world to focus “collective energies on addressing the dire humanitarian situation in Afghanistan.” These sentiments were echoed by foreign ministers of Saudi Arabia, Pakistan, and Turkey, among those from other Islamic countries.

This is not an outcome to gloat over, by any means. But, by piloting the OIC endeavor and through a robust public diplomacy drive, Pakistan has an opportunity to come in the good books of the international community. It can do this by becoming the pivot for humanitarian assistance to Afghanistan, and, by building on that, change the lens of suspicion through which it has—thus far—been viewed in the West.

The key takeaways of the OIC summit were the following: it was agreed to create a Humanitarian Trust Fund and Food Security Program for Afghanistan; OIC would forge partnerships with the UN to mobilize a roadmap in the relevant forums to guarantee the flow of humanitarian assistance to Afghanistan; and, it would launch a program to ensure food security for the Afghan people. The event gives Pakistan a unique chance at redemption. Here’s why.

First, any multilateral effort for routing humanitarian assistance to Afghanistan—be it through OIC or other international donor agencies—will require at least one country to take the lead. No country is in a better position to do this than Pakistan. Geography has been Pakistan’s bane, but it is also its biggest asset. Due to sharing a 2,650 km border with Afghanistan and the historic socio-cultural ties between people of the two countries, Pakistan is the natural corridor for humanitarian assistance to Afghanistan. These efforts by Pakistan can go some distance in ameliorating the suffering of the Afghans and, importantly, generate some much-needed goodwill for Pakistan. This can permeate through generations of Afghans who generally hold Pakistan responsible for Afghanistan’s woes.

Second, this goodwill can also resonate globally beyond Afghanistan. To do this, Pakistan should work towards transforming the pledges for humanitarian assistance to Afghanistan into actionable financial support. This would require its foreign office to reach out to Islamic countries on a one-to-one basis. A well-thought-out and proactive foreign policy approach, albeit one that is packaged as a humanitarian endeavor, will be a shot in the arm for Pakistan and give it much-needed diplomatic traction.

Third, building on the momentum generated by the OIC platform, in the not-so-distant future, Pakistan should look into organizing a global summit on Afghanistan—ideally, backed by the United States, Russia, and China. This summit, like the OIC summit, should be apolitical in its orientation; Participation should be extended to the world at large. This can make Afghanistan the cynosure of global attention from a humanitarian perspective as well as give Islamabad an opportunity to mend its frayed relations with Washington and with Western countries.

There were evident signs during the summit that Pakistan wishes to dissociate itself from the Taliban government in Kabul. Pakistan’s foreign minister’s made it clear that the summit was not about recognition of the Taliban but “engagement” with the new dispensation in Kabul. He advised the world to carry this out by nudging the Taliban through “persuasion, through incentives, to move in the right direction.” He also made it clear that the summit was aimed at “the people of Afghanistan” rather than “a particular group.”

This is an important, if not often repeated, message from Pakistan, which has been desperately trying to shape the discourse surrounding its relationship with the Taliban. But accomplishing this would be an uphill task. In August 2021, Pakistan’s much-touted policy shift towards geo-economics—the country’s attempt to position itself as the regional trade hub of connectivity—had cold water poured over it after the Taliban took over Kabul, an event that the world blamed on Pakistan.

To undo these entrenched negative perceptions, Islamabad will not only have to continue to constructively dissociate itself from any illegal acts committed by the Taliban government, but, paradoxically, also be the first to repeatedly remind them that their hopes of sustained humanitarian assistance, let alone international recognition, would be dashed unless they deliver on promises relating to the rights of women, children, and minorities in Afghanistan. The world will not only be closely watching the Taliban but also Islamabad—to gauge the intent underlying Pakistan’s outreach towards the world.

And, finally, this would also require Pakistan to focus on getting its own house in order on a war footing. As recently stated by Ali Jaffrey, Pakistan must not squander the gains made by its armed forces and law enforcement agencies by capitulating to radical factions such as the Tehreek-e-Labbaik, Pakistan (TLP). The TLP, a radical outfit that has used a religious slogan for political gains, was recently involved in a two-week-long impasse which resulted in the killing of seven police officials. Not only did the government ink a deal with the TLP, but it also removed the TLP from the list of proscribed organizations.

To demonstrate its seriousness in turning a new page with the world, Pakistan would have to take urgent steps to rein in militant outfits like the TLP that pose an existential threat to the country. No Pakistani endeavor on Afghanistan’s behalf will stand a chance of succeeding if Islamabad is unable to demonstrate that its own house is in order.

The long-term global buy-in of Pakistan’s efforts regarding Afghanistan and, concomitantly, restoring its global image will ultimately depend on whether Pakistan is able to translate rhetoric into action. This may be Pakistan’s best chance to turn a new page with the world.

Hassan Aslam Shad is an international lawyer and a geopolitical analyst based in the Middle East. He is a graduate of Harvard Law School.