Can Pompeo Succeed Where Tillerson Failed? 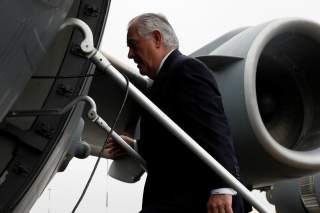 President Trump clearly favors unpredictability, instinct, and audacious and often reckless strokes in decisionmaking. The abrupt firing of Secretary of State Rex Tillerson, as he was concluding a fence-mending trip to Africa, is only the most recent example. But it may be one of his more fateful decisions.

He unceremoniously dismissed Tillerson in a Twitter post on the eve of critical decisions on the Iran nuclear agreement and summit negotiations with North Korea, raising serious questions about the foreign-policy decisionmaking process in the administration. Even as he was publicly embracing “chaos”—contending that he seeks contrary views—he named CIA director Mike Pompeo as Tillerson’s successor because “we’re always on the same wavelength.” He may say that he wants disparate views to consider, but his actions suggest he only wants advice from those who agree with him.

In foreign policy, this is particularly dangerous. He appears unlikely to seek or heed expert advice from the career professionals in the State Department when those viewpoints conflict with his own. For example, he seems not to understand the need to ensure that allies and friends are consulted in key foreign-policy decisions. Tillerson was not successful in his stewardship of the State Department, but his removal could mean a narrowing and skewing of advice available to the president, and more international uncertainty at a time when U.S. leadership is desperately needed.

Tillerson’s task was daunting from the start. He had no previous diplomatic or government experience, and was accustomed to managing a huge international corporation. And he worked for a president who disdains traditional diplomacy and international agreements, and makes it clear he wants to make all major decisions himself.

Tillerson was not successful in his leadership of the State Department. Morale is at rock bottom among the career Foreign Service over the resignations of many highly skilled officers, over the large number of unfilled policy-level positions and ambassadorships, and over the unexplained, and in our views foolish, plans to cut State Department staff and move away from traditional positions such as democracy promotion and support for human rights. That said, there was a sense in recent months that Tillerson was coming to understand his job better and appreciate the value of the Foreign Service and the role of traditional diplomacy.

Tillerson’s removal was probably inevitable after he reportedly called Trump a “moron.” The president’s disavowal of the Paris climate control agreement, and differences over diplomacy with North Korea and, more recently, on whether to continue the Iran nuclear deal, apparently brought matters to a head. Tillerson now joins the list of “globalists” to exit the administration following the departure of Gary Cohn, the chairman of the White House National Economic Council, over the tariffs on steel and aluminum. The widely reported impending removal of National Security Advisor H. R. McMaster would complete the trifecta.

The abrupt and unceremonious firing of Tillerson, similar to that of former FBI director James Comey, comes at a time of upheaval in the White House—amid Cohn’s resignation, the Mueller investigation growing closer to the White House and the ongoing Stormy Daniels uproar. Friends and allies are trying to discern the administration’s patterns and policy. But in the meantime they are protecting their interests by organizing new international trade agreements without the United States, and contemplating retaliatory steps over tariffs on steel and aluminum. Relations with Russia are at a very dangerous point, over interference in U.S. elections, Syria and now the nerve gas attack in England, which Tillerson squarely blamed on the Russians. Allies are now worried the United States will forsake the Iran agreement and, are both encouraged and worried over the prospect of Trump negotiating directly with the North Korean leader.

Reason would dictate that, faced with all these dangers and complexities, Trump would opt for stability within his administration. That he has chosen to let go of the globalists and bring in Pompeo as secretary of state underscores that Trump wants to surround himself with like-minded individuals in dealing with Iran, North Korea and other foreign-policy challenges.

What are the prospects for Pompeo in restoring the status of the State Department and bringing greater coherence to foreign policymaking and implementation? By most accounts, he has done a good job at the CIA of respecting, supporting and listening to the views of career service members. He has earned their respect in doing so, and has spoken candidly to the president about the threats we face, including Russia’s past and present attempts at political interference.

Pompeo seems to enjoy the trust of the president, unlike Tillerson, and shares his hawkish views on Iran and North Korea. But it is one thing to provide intelligence judgments to the president and another to help make critical foreign-policy judgments and then implement them. Will he be able to change the president’s mind, or at least influence him? Will he act as a wise head and disagree at times, as Defense Secretary James Mattis has done, or simply turn into another cabinet-level cheerleader? The Senate should explore these questions carefully as it considers Pompeo’s nomination.

On balance, Trump seems to be circling the wagons and eliminating alternative points of view among his closest advisors. The loss of Tillerson, Cohn and perhaps McMaster means that decisionmaking will not have the benefit of the “global” perspective. The gravest immediate danger is from North Korea, and we can only hope that Trump will receive and be open to critical viewpoints and perspectives, that he will fill the vacancies at State with competent professionals—either from the Foreign Service or outsiders with relevant experience and competence—and that the State Department’s expertise will again be fully utilized.

Jeffrey H. Smith, a Washington attorney, previously served as the general counsel of the CIA and as an assistant legal adviser at the State Department. Kenneth Yalowitz is the director of the MA Conflict Resolution Program at Georgetown University and a global fellow at the Woodrow Wilson Center, and was U.S. ambassador to Belarus and Georgia.