Can President Trump Cut a Deal for Peace on the Korean Peninsula? 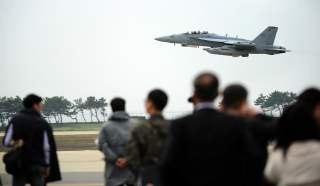 Is there a diplomatic solution to the crisis on the Korean Peninsula? Yes, there is.

Washington’s offer can succeed because it will incentivize the Chinese leadership to cooperate with Seoul, Washington and Tokyo. Rightly or wrongly, Beijing fears the American military presence on the Eurasian landmass and would welcome its departure. However, Beijing also knows that unless Seoul takes control of North Korea and its oppressed and starving masses, North Korea’s government will remain an economic burden and a permanent catalyst for unnecessary conflict with China’s neighbors and the United States.

President Trump discovered in his talks with President Xi that Beijing has no desire for war with the United States. China wants to do business with America, but if Washington strikes North Korea, Beijing’s readiness to cooperate in the resolution of the crisis will vanish. Worse, Beijing will conclude that its own security demands a much closer military relationship with Moscow—an arrangement that is, from China’s viewpoint, unnatural and undesirable. Clearly, Washington must avoid this outcome lest it obstruct future cooperation between the United States and China, the world’s two largest economies.

Now why has this idea not surfaced inside the Trump White House? Why would President Trump who currently demands that Seoul pay for the deployment of additional U.S. Forces to Korea not seek a way to secure Korean unity and freedom by disengaging U.S. Forces from the peninsula? After all, the Republic of Korea's economy is fifty times the size of North Korea’s. In economic terms, North Korea ranks behind Ethiopia, a sub-Saharan African State. Despite North Korea’s grossly exaggerated claims of military capability, North Korea is a dying state.

One of the reasons may be that President Trump’s advisors, like most people inside the Washington Beltway, oppose any change in the postwar status quo. Perhaps, they are privately committed to America’s unofficial, but very real overseas “empire” of military-economic dependencies? If so, they confuse a temporary military presence resulting from a stalemate brokered by President Eisenhower in 1953 with long-term American strategic interest.

During his 1952 election campaign, Eisenhower promised to go to Korea for a firsthand look at the situation on the ground. However, he made no promises regarding how he would end a deeply unpopular war that had killed more than thirty thousand Americans by 1953. When he came to the presidency, Eisenhower was determined to halt the growth of the federal government, balance the national budget and lower the rate of inflation, but the Korean Conflict put those priorities on hold.

Soon after arriving in Korea, President Eisenhower discovered that Gen. Mark Clark, the four-star commander of U.S. and allied forces in Korea wanted a large-scale frontal assault against the Chinese and Korean armies. He also wanted to conduct simultaneous air and sea operations against the Chinese mainland. Clark was convinced these operations would produce a stunning victory.

Eisenhower was not so sure. Eisenhower may have known that Moscow, not Beijing, approved the North Korean invasion of the South. But Eisenhower definitely knew how wasteful and self-defeating Japan’s 1937 invasion of China had been and how China’s determined resistance during World War II fatally weakened Japanese military strength.

Instead of widening the war as General Clark recommended, Eisenhower ended the conflict on the best terms he could get, insisting that Korean reunification would eventually be achieved with political—not military—means. In May 1953, 69 percent of Americans polled approved of Eisenhower’s actions, though, 55 percent still thought the war had not been worth fighting.

The world has changed since the Korean War. China and the United States are trading partners on a scale few imagined. Unlike Germany, Japan is ready to assert itself as an independent world power and play a key role in securing stability in Asia. Vietnam is no longer incurably hostile to the United States. But Americans are no less disinclined today to wage war in Asia than they were in 1953.

The point is simple. It’s time for President Trump to craft a new strategy, one that rejects the notion that an American military presence on Korean soil is essential to Washington’s global leadership. It’s not. Things have changed.

Col. (ret) Douglas Macgregor is a decorated Army combat veteran, a PhD and the author of five books. His newest is Margin of Victory: Five Battles that Changed the Face of Modern War, available from Naval Institute Press.