Can the Private Sector Save Belarus? 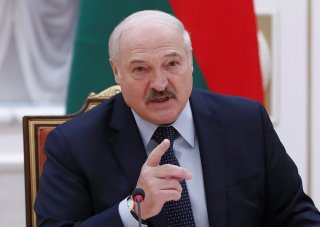 Soon after Belarusian dictator Alyaksandr Lukashenka forced the landing of a diverted Ryanair to Minsk–allowing for the capture and imprisonment of Belarusian activist Roman Protasevich–the European Union announced sanctions against his regime. In an unprecedented step since the onset of unrest in August of last year, the organization also proposed financial support to the tune of €3 billion to a prospective ‘democratic Belarus,’ i.e. in the event that Lukashenka is overthrown.

This move was welcomed by many in the international community as a clarion call for regime change in the eastern European country. Yet doubts remain as to whether it will meaningfully affect the course of the nation’s revolution. First, the amount is insufficient to tackle the republic’s dire financial situation, which has reached a fever pitch in recent years. External debt, for instance, remains at around $18 billion, $9 billion of which is owed to Vladimir Putin’s Russia. Also at risk are Russian indirect oil subsidies (amounting to an additional $4 billion) which may be cut in case of democratization. Currently, the national bank’s foreign exchange reserves can service only two-thirds of the total currency deposits held in private and corporate accounts in Belarusian banks.

Moreover, if the situation in Minsk appears to favor democratization, Russia will probably marshal its own financial resources in a bid to keep Belarus dependent on Russian political and economic clout. This would certainly accord with the state’s previous behavior–in 2013, then-President of Ukraine Viktor Yanukovich abruptly left talks regarding an association agreement with the European Union after its imposing neighbor threatened stark financial consequences. Placing comparable economic pressure on Belarus would likely be even more effective, considering that Russia represents nearly half of the nation’s external trade.

Finally and most importantly, the EU’s proposed assistance program is short-lived: such aid might be considered sufficient if the EU promised Belarus candidacy status and membership in the Union, with all its attendant benefits—but this does not appear to be in the cards, at least in the near future. As it stands currently, the €3 billion initiative offers only a minority of Belarusians the incentive to revolt, and certainly does not appear to be the “game-changing” proposal which would tip the scales for a democratic Belarus.

But the European Union may be overlooking a different option, one which promises much greater chances at success. In recent decades the phenomenon of ‘state capture’–when a corporation or an authoritarian leader actually privatizes the state and uses all the sovereign governance power for their own sake and benefit–has proven common across the geopolitical ecosystem. Though this sort of capture is largely seen as an existential threat to democracy, in authoritarian regimes like Lukashenka’s, it could be engineered to counter authoritarian regimes rather than buttress them.

To illustrate this argument, imagine a scenario in which a large multinational corporation (MNC) that can transfer its jurisdiction relatively easy–social media and internet companies first come to mind–decides to sign an agreement with president-elect Sviatlana Tsikhanouskaya. In exchange for moving its headquarters to Minsk, this agreement may read, this MNC would receive an exclusive tax benefits regime, special status for its employees, tax relief for local subsidiaries, protections against state antitrust litigation, and so on. Such an agreement might be particularly attractive to a company like Google. As the company’s spokesman claims, the effective tax rate was around twenty-six percent during the last ten years. Should the government of Belarus lower the profit tax for such a company to, for example, six or even eight percent, it might result in up to $4 billion in savings per year for Google alone. Add to this the fact that the combined salary of 23,000 Google employees in its Mountain View, California headquarters amounts to $6 billion a year with an effective U.S. income tax on $150k salary staying at thirty-four percent. If a mere thirteen percent Belarusian tax is instead applied, about $1 billion in additional income would stay in these employees’ pockets––not to mention the difference in the living costs between California and Central Europe. Finally, Google’s excess of $120 billion in cash reserves can easily cover Belarus’s debt securities, which yield up to 7.8 percent annual return. That’s around six times more than any deposit in a U.S. banking institution can return.

If one “owns” a state, there is naturally no risk on part of the owner associated with its own securities. The presence of a company of Google’s size, with even some of its cash deposited in local banks, will effectively exclude any chance of speculative runs on such financial institutions. For the sake of clarity, we for now, exclude some of the more thorny issues of financial and monetary policy such as the right to issue cryptocurrency–which may pose a problem in the United States and elsewhere, but not in a state under the essential control of a multinational corporation. This proposal, in brief, is less comparable to building a ‘special economic zone’ in some state than turning a whole nation into a business paradise for IT multinationals. Not only would this create unique opportunities for both the corporation itself and the local economy, it would also prove a mortal financial blow to the Lukashenka regime and likely lead to the downfall of the authoritarian leader.

Of course, it might be not a single company, or not the leader of global IT business, which can change the course of Belarusian history. However, the G7’s recent mumblings about corporate tax avoidance suggest a less benevolent business atmosphere is taking shape across the industrialized liberal world. Under this incipient system, the question of tax optimization is likely to resurface for many multinationals looking to maximize gross profits. Of course, many companies already seek aggressively to avoid their tax liabilities. Apple infamously repatriated $243 billion from offshore accounts after President Trump signed the Tax Cuts and Jobs Act in late 2017. Google, meanwhile, recently moved $23 billion of its financial reserves to Bermuda in an attempt to reduce its own tax bill. Such cases are indicative of a business climate eager to place its assets well away from this new tax regime. So why not simply transform a mid-sized European failing economy into just such a “tax haven” for multinationals, while at the same time creating the most favorable conditions for doing business with leading IT companies by allowing them to serve as major ‘stakeholders’ for an entire nation-state?

In recent years many politicians on the left have repeatedly accused large corporations of creating ‘totalitarian’ business models, including surveillance and aggregation of data about individuals’ tastes and personalities. To our mind, nothing else can change this attitude more than an initiative such as we propose–through which these so-called ‘totalitarian’ corporations can upend a national government in the heart of Europe. Such a course of action could serve as an enduring example of how corporate power can be used for the sake of long-term social, political and economic progress the world over.

Vladislav Inozemtsev writes on global economy and modernization from Moscow and Washington. He is the author of Catching-Up? The Limits of Rapid Economic Development (Transaction Publishers) and Unmodern Nation: Russia in The 21st Century World (Alpina Publishing, in Russian). Dr. Inozemtsev advised both Commission on Modernization of the Russian Economy under President Dmitry Medvedev in 2009–2011 and several Russian liberal politicians in more recent years.

Yaroslav Romanchuk is a Belarusian economist and politician. He currently works as President of the Scientific Research Mises Center.