Can the Queen Save Parliament from Its Brexit Debacle? 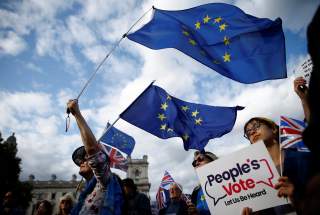 The British political system exploded this week when Tory Minister of Parliament Philip Lee switched parties and joined the Liberal Democrats, which eliminated the Conservative Party’s one-seat working majority in Parliament. “I wish my honorable friend all the best,” said Prime Minister Boris Johnson, interrupting his speech on trade relations to address the earthquake happening right in front of him.

The sting went further. On Wednesday, Johnson lost his first parliamentary vote (the first since 1894 to suffer such a defeat) 327 to 299, when a coalition of Labour, Liberal Democrats, and rebellious Tories voted to block a No-Deal Brexit from occurring. If a suitable plan is not presented by October 17, then the bill would require Johnson to request yet another extension past the October 31 deadline. In response, Johnson expelled twenty-one ministers of Parliament from the Conservative Party, including former Chancellor of the Exchequer Philip Hammond, Kenneth Clarke (a conservative parliamentarian since 1970), and Nicholas Soames, grandson of Winston Churchill.

What would normally follow such an ignoble defeat would be a new government, whether through a new coalition of already seated ministers of Parliament or a new election. Somehow, though, neither seems likely.

“Boris knows how to win. Don’t worry about him. He’s going to be okay,” President Donald Trump told reporters, chuffed that his alter-ego across the pond could handle himself. Closer to home however, there was less confidence. Following the vote and the purge of rebel Tories, Jo Johnson, a Conservative minister of Parliament and brother of the prime minister, resigned his post following irreconcilable differences. Jo Johnson voted to Remain in the 2016 referendum.

An anti-Brexit, anti-Johnson majority now sits in parliament. The likely alternative, preferred by a majority of the Labour ministers of Parliament, would be for party leader Jeremy Corbyn to lead a caretaker government and negotiated a soft Brexit. However, refusal from Liberal Democrats, ex-Tories, and a handful of still-bitter Labourites to vote for the elderly democratic socialist makes this impossible. There stands no unifying figure to form a government and succeed Johnson under parliament’s current makeup.

Johnson has called for a new election, where he hopes to sit an empowered Conservative majority and finish what he was put in office to do. A Tory parliament would simply repeal the anti-No-Deal bill and things would return to last week’s status quo.

“I think our politicians are appalling: on both sides, Remain and Leave, there is a very high level of narcissism and stupidity that is suffocating any political progress on Brexit,” says Freddy Gray, deputy editor of The Spectator. Boris Johnson was the editor of the same publication from 1999 to 2005. “The Remainer MPs are for me the worst. They are now trying to avoid a general election so they can scupper the government, when it is quite clear that an election is exactly what we need.”

A new election however, prior to October 31, seems riskier yet for Remainers. Current polls show the Conservatives leading Labour by ten points nationally. While there is debate over how this would break down in individual districts, there’s no excitement to get voters to the polls. And without a two-thirds majority of parliament willing to call for an early election, Johnson is stuck in limbo.

A prime minister, lacking a constituency and with a majority of parliament rejecting his principle program, but with the same parliament unwilling to hold a vote of no-confidence to remove him from power, has never happened in the history of the United Kingdom.

The bill will be brought to a vote in the House of Lords on Friday, where it will pass. The last possible stop-gate is Britain’s longest reigning monarch, Queen Elizabeth II.

The queen retains her royal prerogative, which is a final veto over all acts of Parliament. British monarchs have always assented to their appointed advisors since the early seventeenth century and have become nothing more than a formal rubber-stamp. However, there’s never been a bill that’s been opposed by a prime minister but supported by a parliament that refuses to take power.

When the queen looks for the support of her ministers, whom will she turn to?