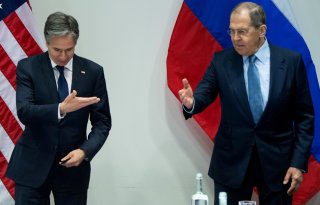 Here we go again. The pattern is now well-established. U.S.-Russia relations worsen in the course of a presidential administration, and by the end of an occupant’s tenure in the White House, the pundits declare that the relationship hasn’t been this bad since the days of the Cold War. Both sides develop their well-worn list of talking points about the transgressions and misdeeds of the other. A new U.S. president promises that he won’t take the same steps as his predecessor in dealing with the Kremlin, and even takes some actions designed to show the Russian government how things have changed, and how Russia is not as important a priority or player in the international scene for the United States and better not have an over-inflated sense of its importance in the grand scheme of things. And then, lo and behold, at the first major encounter between senior Russian and American figures, they engage in a tough but frank exchange of views and solemnly declare that despite all the transgressions of the past, both the United States and the Russian Federation can engage in substantive dialogue and find ways to cooperate on areas of shared concern.

It almost feels that I could take pieces written in 2001, or 2009, or 2017, cross out some names (striking Colin Powell, Hillary Clinton, or Rex Tillerson for Tony Blinken), change a few points, and produce an analysis of the first encounter in Reykjavik. And, for his part, Russian Foreign Minister Sergey Lavrov has had such experience in dialoguing with his American counterpart that the script is second nature—the standard references to the “constructive” nature of the talks, the need for “mutual respect” and the enunciation of an agenda that always seems to have the same items on it (noting the appearance of both North Korea and Iran yet again). And then, the hopes for some sort of breakthrough fade away as the structural realities of the U.S.-Russia relationship—particularly the zero-sum nature of many of its components—reasserts itself. Any positive momentum founders on fundamental disagreements such as the enlargement of the North Atlantic alliance to encompass states like Ukraine or Moscow’s insistence on its sovereign rights to govern itself as it sees fit, and so on. And the pattern repeats itself.

It is critically important for the United States and Russia to talk, and the focus of the Blinken-Lavrov meeting on the question of strategic stability—arguably the most critically important factor given that both countries hold impressive nuclear arsenals—is the correct one. Moreover, the lemming-like slide in the relationship, where each side increases punitive actions while finding more ways to cut ties—is extremely dangerous. If the Reykjavik meeting can arrest this process, and commit both sides to a position I argued for nine long years ago—the importance of ring-fencing certain aspects of the U.S.-Russia relationship from political disruption—then this will have been an important first meeting. Having it take place on the sidelines of the Arctic Council was also important because the Arctic is one of the few remaining issue areas where Washington and Moscow do tend to collaborate and have a shared interest in beating back any efforts by states like China to insist that a category of “near-Arctic” states should also have a say in the regional infrastructure of governance.

What’s positive is that both sides agree that it is important to talk and to draw up a substantive agenda on maintaining strategic stability. The imposition of new U.S. sanctions against the Nord Stream 2 pipeline, with the concurrent waiver granted to the parent holding company of that pipeline, also creates a temporary pause in the cycle of Russian action-U.S. sanction-Russian action-U.S. sanction that has characterized relations over the past several years—at least through to a planned presidential summit between Joe Biden and Vladimir Putin next month. (Of course, the waiver given to Nord Stream AG may be less motivated by a desire to offer an olive branch to the Kremlin and more to avoid an open rupture with German chancellor Angela Merkel before the G-7 and NATO summits.)

But a temporary breathing space does not portend a major shift in the relationship. The real question is whether Biden and Putin are prepared to bargain. The crux of any such engagement is to what extent would the Biden administration be prepared to throttle back its pressure on Russia—over Ukraine, the fate of Alexei Navalny, etc.— if the Putin government was prepared to guarantee concrete support for American initiatives—not only on Iran and North Korea but Syria but even on the parameters by which other Eurasian states could affiliate to Euro-Atlantic institutions. To what extent could Russia shape settlements—say with regard to Syria—where it might be able to extract concessions from the United States on behalf of its clients? Left unspoken but also hanging in the air is what the U.S. might be willing to offer to encourage Russia to reconsider aspects of its strategic partnership with Beijing.

And yet, the record on compromises has not been promising. For several years the German government has tried to sell a compromise formula on the Nord Stream pipeline, that in return for the U.S. ceasing its efforts to prevent its construction Russia would be required to guarantee the continuation of some energy transit via Ukraine—that has not found many takers in Washington. Indeed, earlier this month Blinken himself reiterated to the Ukrainian government that it is standing U.S. policy to prevent completion of the line—a policy that the temporary waiver of sanctions does not appear to have altered.

It is possible to have a frank conversation and still not to find common ground. But perhaps that ought not to be the metric. Perhaps just finding a way to deconflict the U.S.-Russia relationship is ambitious enough. Three years ago, I wrote in the journal Horizons “that friction in the American relationship with Russia is inevitable, but dysfunction is not. It should be possible to find a way to contain and mitigate the contradictions between the two countries’ approach to international affairs.” We’ll see if the Blinken-Lavrov meeting is the first step in this direction.