Can Russia and Turkey Step Back from the Brink in Syria? 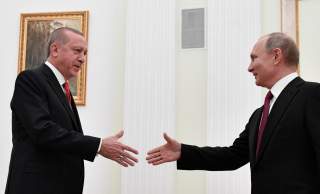 What a difference two months can make. Presidents Vladimir Putin and Recep Tayyip Erdogan kicked off the new year by launching a new multi-billion-dollar gas pipeline between their countries. But now the two leaders are scrambling to pull their forces from the brink of conflict in Syria.

Following the death of thirty-three Turkish soldiers during an airstrike last week in northwest Syria’s Idlib province, Turkey on Sunday launched a new military offensive, known as Operation Spring Shield, against Syrian government troops in the region. Over the past several days, the Turkish military has battered Syrian government forces in Idlib with drones and heavy artillery fire while Turkish-backed rebels have made gains against Damascus on the ground.

In response, the Russian Navy sent two missile-equipped frigates and a large landing ship to the coast of Syria. The Russian Ministry of Defense also warned that it could not guarantee the safety of Turkish planes flying over Syria.

On March 5, Putin and Erdogan will meet in Moscow in an attempt to defuse the situation in Idlib. The two presidents will be tasked with avoiding war and rescuing a rapprochement that has taken place between their two countries since 2016.

Mesut Hakki Caşın, a professor at Yeditepe University in Istanbul and a member of the security and foreign policy board that advises Erdogan, called the March 5 summit “one of the most vital, critical meetings in the history of the two countries.” Although he expressed confidence that Putin and Erdogan would arrive at a mutual understanding, he described the current situation as fraught with danger.

“I think Russia and Turkey can find a new formula for the liquidation of radical terrorist groups in [Idlib] and the collection of heavy weapons. But in the event of failure, the conflict in Idlib could spread throughout Syria and the region,” Caşın said. “As the most important life-threatening scenario, Russian and Turkish soldiers could face off on the ground. This risk could open the gates of hell in Idlib.”

From a purely military standpoint, both Moscow and Ankara have the necessary mechanisms in place to keep the situation in Idlib from spiraling out of control, explained Viktor Murakhovsky, editor-in-chief of the Russian defense magazine Arsenal of the Fatherland.

“It's important to understand that the size of the zone where fighting is going on is quite small—it's about one hundred kilometers from north to south and about seventy kilometers from east to west,” he said. “Both sides have the surveillance technology and the methods for command and control to monitor the situation in real-time."

But Murakhovsky cautioned that without a new political solution for Idlib, tensions there would remain dangerously high.

It will not be easy for Putin and Erdogan to reach a compromise, argued Alexey Malashenko, research director at the Moscow-based Dialogue of Civilizations think tank. Malashenko told the National Interest that the high stakes and emotions on both sides made it difficult for either leader to cede ground.

“Neither Turkey nor Russia can afford to lose in this situation,” he said. “If either Putin or Erdogan lose, they will look weak and have their authority undermined at home. How are they going to negotiate in this context?”

One of Turkey’s primary demands has been for Russia to leave it “one on one with Bashar al-Assad.” Russia could never agree to that, Malashenko explained, because for the Kremlin “abandoning Assad would be an admission of defeat in the Middle East.”

The source of this new standoff between Russia and Turkey is Idlib, a province in northwestern Syria that is the last remaining rebel-held stronghold in the country. In 2018, Russia and Turkey concluded a deal to establish a de-escalation zone in Idlib and clear it of “radical militants” such as Hayat Tahrir al-Sham, an Al Qaeda affiliate. Both sides have regularly accused each other of violating the agreement.

The deal finally collapsed in December, when Bashar al-Assad launched a new offensive into Idlib with the help of Russian air support. As Syrian government forces recaptured territory in the province, a growing influx of refugees headed for the Turkish border. The United Nations estimates that nine hundred thousand people have fled Idlib since Assad’s campaign began.

Turkey, which already houses 3.6 million Syrian refugees, responded by sending thousands of troops and military vehicles to Idlib. Over the past month, Turkish and Syrian forces have fought several times in Idlib, leaving fifty-four Turkish soldiers dead. The most dramatic clash occurred last Thursday when a Syrian or Russian airstrike killed thirty-three Turkish soldiers. It was this incident that prompted Turkey to launch its latest major military operation into Syria.

Erdogan’s willingness to escalate over Assad’s Idlib offensive caught many in the Russian political establishment by surprise, admitted Malashenko.

“In Moscow, they miscalculated Turkey’s reaction,” he said. “They thought that one way or another, there would be a certain number of battles, the whole thing would last several days, and then it would be possible to reach a deal. But instead, Erdogan decided to stand on principle.”

Murakhovsky explained that Russia had hoped that Erdogan would show greater flexibility toward Russian objectives in Idlib after Moscow had sought to accommodate Ankara’s concerns about Kurdish militias in northwestern Syria.

“When Turkey launched Operation Peace Spring into northwestern Syria against the Kurds [last October], Russia made significant concessions,” he said. “Russia agreed to ensure that the Kurds would withdraw their forces from the region. It also agreed to conduct joint patrols with Turkey in this region even though doing so caused some problems with our Syrian partners. For this reason, such a Turkish reaction to the offensive in Idlib was quite unexpected."

Such grievances, however, are likely to be set aside when Putin and Erdogan meet on March 5. The Turkish and Russian experts interviewed by the National Interest unanimously contended that despite the tensions over Idlib, the burgeoning partnership between Moscow and Ankara was too important for both countries to fail.

“Turkey and Russia, leaving aside historical fears and concerns, are close to economic-political-military cooperation that can be described as a golden age, while the burning of bridges squeezes against the future of the two communities,” Caşın said.

Even the challenges in Idlib were not insurmountable, he insisted. “As a lesson from this crisis, I think the Turkish-Russian friendship will be strengthened,” Caşın stated. “History has condemned the Russians and Turks, who have learned from wars, to remain friends in this geography.”