Can Russia and Iran Still Be Friends after the Nuclear Deal? 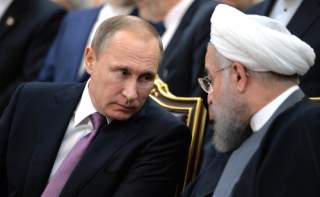 Russian observers have long understood that Iranian-American hostility has been a factor motivating Tehran to seek close ties to Moscow, despite lingering Iranian resentment regarding czarist and Soviet interventions in Iranian affairs and ongoing differences over numerous policy issues (including the delimitation of the Caspian, oil production levels and Russia’s cooperation with Iranian adversaries in the region). Even areas of Russian-Iranian cooperation—such as Russia’s completion of Iran’s Bushehr nuclear reactor and weapons sales to Iran—have proved contentious due to delays, disputes over contract terms and even cancellation of agreements (such as when President Dmitri Medvedev announced that Moscow would not deliver S-300 air defense missile systems to Iran in 2010 even though Tehran had already paid for them).

Many Russian observers, then, have expressed concern that if Iranian-American relations ever improved, this would lead to an overall Iranian turn toward the West and away from Russia. As progress was made toward the achievement of the Iranian nuclear accord (which was a high priority for the Obama administration in particular), some Russians believed the time they feared had come, when Iranian-American rapprochement would soon result in less Russian influence in Iran. Some had called for Russia to somehow derail the talks, but others pointed out that so long as Washington and Tehran wanted to achieve a nuclear accord, any effort by Moscow to stop it would only lead to an agreement being reached without Russian participation, and that would make Moscow appear weak and unimportant.

By now, though, it is clear that the coming into force of the Iranian nuclear accord has not resulted in an overall Iranian-American rapprochement. Nor is it likely to any time soon. This being the case, there has not been the attenuation of Russian-Iranian relations that many in Moscow feared the Iranian nuclear accord would lead to. Indeed, Russian-Iranian cooperation has increased recently.

One factor contributing toward Russian-Iranian cooperation is the joint fear on the part of their top leaders that America and the West seek to topple them through supporting “color revolutions” against them. Supreme Leader Ayatollah Ali Khamenei has placed a prohibition on expanding Iranian-American ties beyond nuclear cooperation. In an article published in the National Interest on May 3, 2016, the Iranian dissident author, Akbar Ganji, wrote that “in Khamenei’s view antagonism toward a common enemy, the United States, is the basis for unity between Iran and Russia.”

Moscow and Tehran, as is well known, have also been pursuing the common goal of protecting the Assad regime in Syria against the domestic opposition that arose against it during the onset of the “Arab Spring” in 2011. Before September 2015, forces from Iran (as well as Iranian allies from Hezbollah and various Iraqi and Afghan Shia militias) undertook the main burden of defending Assad while Russia played more of a supportive role in supplying arms to Damascus. But with the Assad regime losing ground during the summer of 2015 despite their support, Putin decided to ramp up Moscow’s role by sending Russian air force units to Syria, where they launched a bombing campaign that not only put a stop to the Assad regime losing ground, but to its regaining lost territory from its opponents. Russian and Iranian press accounts stated that joint planning for the Russian intervention began months in advance. Further, the combination of Russian air power and Iranian (plus allied militia) ground forces has proven highly effective.

Other forms of Russian-Iranian military cooperation have also increased. In April 2016, TASS confirmed that Russia had begun supplying S-300 air defense missile systems to Iran. Moscow had originally agreed to do so in 2007, but President Medvedev had then canceled the deal in 2010, perhaps as part of his effort to secure U.S. Senate ratification of New START (Strategic Arms Reduction Treaty)—the subject of much Russian-Iranian contention afterward. In April 2015, President Putin announced that progress on the Iranian nuclear accord allowed Russia to lift the ban on selling S-300s to Iran. In addition, TASS also announced in April 2016 that Russia might supply radiolocation and electronic warfare systems to Iran. Trilateral security cooperation among Russia, Azerbaijan and Iran also advanced.

In addition, Russian-Iranian economic cooperation has expanded recently. Majles Speaker Ali Larijani declared that Iran will give Russia priority in any industry it wants to invest in. A top Russian customs official announced that Iran had promised to replace Turkey (whose ties to Russia have soured dramatically after the shoot down of a Russian military aircraft by Turkish forces in the vicinity of the Syrian-Turkish border in November 2015) as a supplier of perishable foodstuffs. In addition, Moscow and Tehran signed a memorandum of understanding on railway development, and have discussed Russian investment in Iranian transportation infrastructure (including seaports). Moscow and Tehran have also agreed to explore for underground sources of water in Iran. And the two sides are working on expanding Russian-Iranian educational cooperation.

On the diplomatic front, Foreign Minister Javad Zarif expressed hopes that Russian-Iranian cooperation could lead to progress on resolving the Nagorno-Karabakh dispute as well as delimiting the Caspian Sea. Moscow has also been pressing the case for admitting Iran to the Shanghai Cooperation Organization, but could not persuade China to allow this at the most recent SCO summit.

Russian-Iranian cooperation, then, did not just remain strong after the Iranian nuclear accord was agreed upon, but has actually increased since then. Nevertheless, ties between Moscow and Tehran are not completely harmonious. The Iranian press frequently refers to longstanding Iranian grievances against Russia, including the loss of territory to czarist Russia in the early nineteenth century, czarist and Soviet interventions in Iran in the twentieth century, Soviet support for secessionism in Iran’s northwest after the two world wars, and Soviet support for Baghdad during the 1980–88 Iran-Iraq War. Akbar Ganji has noted five more recent grievances: (1) Russia’s failure to veto UN Security Council resolutions against Iran over the nuclear issue; (2) the lengthy delay in Russian completion of the Bushehr nuclear reactor; (3) Russia’s failure to sell weapons (including fighter aircraft, tanks and various missiles) that Gorbachev said Moscow would sell to Tehran; (4) Russian pursuit of aims in Syria “which may sometimes be against Iran’s”; and (5) Russia’s close relations with “Iran’s archenemies,” Israel and Saudi Arabia.

A recent episode suggested that Moscow is not quite as committed to working with Tehran in the security realm as Iranian leaders would like. Ali Akbar Velayati (currently foreign policy adviser to Iran’s supreme leader, and a former Iranian foreign minister) in early February 2016 declared after a visit to Moscow that there are “prerequisites” for the creation of an alliance between Iran, Russia, Syria and Hezbollah. Soon thereafter, though, a Russian Foreign Ministry official described Velayati’s statement as “speculative,” and declared that “there are no plans of creating such an alliance.”

There are also limits to Russian-Iranian cooperation in the economic realm. In the same interview in which Majles Speaker Larijani said that Iran will give priority to Russian investment, he also admitted that “Iranian businessmen traditionally work with Europe.” Further, while Russia and Saudi Arabia both expressed their willingness to join with other oil exporters in freezing production in order to support oil prices, Tehran refused to do so and insisted that it would expand its oil production to levels that it had reached before the imposition of UN Security Council sanctions against Iran. To the extent that Iran’s actions serve to increase the overall supply of oil, of course, they serve to keep oil prices low for all oil exporters, including Russia. Further, at the same time that Iran is taking advantage of poor relations between Russia and Turkey to increase Iranian exports to Russia, Iran is also seeking expanded economic ties with Turkey.

With regard to Syria, Moscow seems more eager to arrange a negotiated settlement between the Assad regime and at least some of its opponents than Iran does. In addition, while Russia has been supportive of Syrian Kurds as well as their hopes for a “federal solution” that would allow them autonomy inside Syria, Iran has sided with Turkey in opposing these Kurdish aspirations. Turkey and Iran, of course, both fear Kurdish secessionism within their own borders too.

While Russia’s support for Iran joining the Shanghai Cooperation Organization may appear as a sign of closer Russian-Iranian ties, the SCO is not a military alliance and its members are not bound to come to one another’s defense. Indeed, if reports that Moscow has long favored Iranian membership in the SCO while Beijing has not are true, then Iran’s future admission, should it occur, may be more a sign of warming Sino-Iranian ties than Russo-Iranian ones.

Further, while Moscow’s finally delivering S-300s to Tehran is clearly an indication of improving Russian-Iranian relations, it must be noted that these are not the more advanced S-400 air defense missile systems, which Russia is deploying to protect its own forces in Syria. Finally, in reaction to Putin’s March 2016 announcement that he was withdrawing the “main part” of Russian forces from Syria, Israeli president Reuven Rivlin immediately sought—and reportedly received—assurances from Putin that this would not result in Iran and Hezbollah being in a stronger position to threaten Israeli interests. Such reports must have left Tehran wondering whether Moscow had previously made the case to the Netanyahu administration that the Russian presence in Syria served to restrain Iran and Hezbollah from undertaking actions detrimental to Israel. Just as America’s Arab (as well as some other) allies are frustrated by Washington’s close ties to Israel, Iran is frustrated by Moscow’s close ties to the Jewish state.