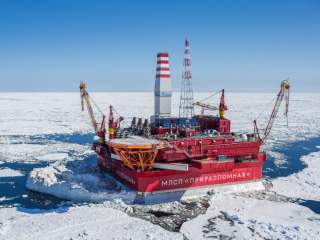 Eight years ago, Senator John McCain declared that Russia, under Vladimir Putin's administration, could only afford to be a major player in world affairs as long as energy prices remained high. In 2016, his thesis will be tested. With oil prices dipping below the $30 per barrel mark, and with Russian companies like Lukoil warning that prices might hover in the low $20s range—on top of sanctions that the United States, Japan and the European Union continue to maintain (through midyear at minimum)—has the Kremlin's luck simply run out? And what of the dream of recasting Russia in the twenty-first century as an "energy superpower?"

For the last decade, high energy prices for oil and natural gas produced a golden river of tax and dividend revenue for the Kremlin that could be used to rehabilitate the social welfare safety net and to sustain a Russian middle class of professionals employed by the state. In more recent years, that surplus was used to undertake a massive modernization program for the Russian military. If, as some sources have suggested, global oil prices will, over the next seven years, stabilize in the $40 per barrel range, the funding strategy employed by the Kremlin in the past will no longer be feasible. The only way to recoup even some of those lost revenues is for Russia to increase exports so that quantity helps to make up for smaller revenues.

Meanwhile, low energy prices are removing some of Russia's potential competition—the North American shale oil and gas that was being touted two years ago as an alternative for a Europe still dependent on Russian sources of supply is increasingly not sustainable at current prices, so some of the competition has been removed by market forces. However, Iran is poised to return to global markets—and some of Russia's expansion in market share over the last few years emerged precisely because Iranian oil was under sanction. The slowdown of economies in China and India also powers down one of the key motors driving energy prices recently—putting greater pressure on Russia to fight to retain the market share it has.

Of course, increased production is also needed to keep revenue flowing. The mobilization of Russian national feeling helped to mitigate the loss of goods and services that resulted from Western sanctions. But any large-scale return to the economic chaos of the 1990s—having salaries be unpaid for months, having pensions and other welfare payments be terminated, having social benefits slashed—opens up the government to the prospect of mass, mobilized unrest.

There are also longer-term questions. The "break-even" point for Russian onshore energy production is generally estimated to be in the mid-teens (Gazpromneft, for instance, cites a $15 break-even point for each barrel of oil it produces). Low energy prices do not immediately strike at the mere profitability of Russian energy firms, but for Russia to retain its position as a major energy producer, its companies must be able to generate profits of sufficient magnitude to build up the massive investment capital that will be needed to bring new projects to fruition—particularly as the traditional low-cost Siberian onshore fields need to be replaced by harder to reach and more expensive offshore and non-traditional sources. Here, Western sanctions can have an impact both by denying Russia access to needed technology and to long-term financing. This is why state firms like Rosneft have been shifting to prepayment for oil as a way to raise funds. The current glut of oil has removed some of the immediate pressure to get new projects started—but over time, new sources will have to be developed if Russia is to sustain its position as a leading energy producer. Otherwise, as the core West Siberian fields become tapped out, it will become more expensive to extract an ever-diminishing source of oil.

It is clear that the economic liberals who have always formed one part of the Kremlin’s political structure are hoping that, this time, the energy price crisis may persuade Putin to embrace meaningful structural reform of the Russian economy—perhaps marked by a willingness to further privatize the state energy companies (Rosneft and Gazprom) and to countenance the formation of new private energy companies that would be able to purchase some of the assets of the state companies and could emerge as a new version of Lukoil or the old TNK. It might also help to jumpstart long-delayed reforms in improving the climate for the emergence of more small and medium sized businesses, shifting the basis of the Russian middle class away from state-supported and funded programs to the private sector.

But while energy revenue has played a key role in Russian restoration, Russia is not a classic one-crop petrostate. Of course, the rest of the Russian commodity sector is also negatively affected by the global economic slowdown, particularly in China—although, it should be noted, Russia’s status as a major producer of gold and other precious metals allows the Kremlin to replenish its treasury even if the ruble continues to decline in value.

But geopolitical realities may provide Russian economic silver linings. While the imminent return of Iranian production may create problems for the Russian energy sector, the restoration of new income streams for Tehran opens up new possibilities for the Russian defense sector. As long as proxy wars continue between Iran and Saudi Arabia throughout the Middle East, and the Iran deal freezes any progress towards a breakout nuclear capacity, Iran will need to bolster its conventional defensive capabilities as well as its ability to supply and support its regional allies. Other regimes in the region may also turn to Moscow to supply military technology as long as the area remains unstable.

The Iran deal also incentivizes other countries to possess the full panoply of a civilian nuclear program for energy production but also as a hedge against Tehran “going nuclear” when the provisions of the deal expire (or if a future Iranian regime abrogates the agreement North Korea-style). Nuclear power, after all, remains part of Russia’s energy superpower triad.

Over the past two years, we’ve seen Russia deal with a series of glancing blows: the failure to achieve a rapid victory in Ukraine, the imposition of Western sanctions, collapses in energy prices. Will its luck run out this year? Or, will Moscow find a way to beat the odds of those predicting that this time the Kremlin will have to change course?

Nikolas K. Gvosdev is a contributing editor at the National Interest and co-author of Russian Foreign Policy: Vectors, Sectors and Interests (CQ Press, 2013). The views expressed here are his own.