Can Saudi Arabia Escape the Trap of Endless War in Yemen? 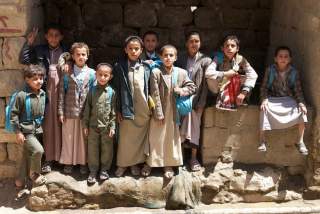 It took only two days after the collapse of Yemen peace talks in early August for the Saudi-led coalition to resume its intense bombing of the rebel-held capital, Sanaa. With it resumed the dismal chronicle of destruction, civilian casualties and humanitarian crisis afflicting the Arab world’s poorest country, and no end is in sight.

To what end? What do the Saudis and their coalition partners hope to gain from this latest escalation of an increasingly pointless conflict? They find themselves locked into a war with no realistic military objective and no achievable definition of victory—a war that is costing them billions of dollars that they don’t have in this time of low oil prices, and which by UN estimates is inflicting an average of 113 civilian casualties per day.

If the Saudis are having second thoughts or reevaluating its strategy, there is no sign of it. At an international security conference in Brussels last month, Foreign Minister Adel al-Jubeir delivered a two-thousand-word summary of Saudi foreign and security policy in which he mentioned Yemen only as one of several countries where the kingdom faces “tensions.”

When the Saudis began the bombing campaign more than a year ago, their stated objective was the restoration to power in Sanaa of what they called the “legitimate government” of ousted president Abdu Rabbu Mansour Hadi, who had been driven out by the rebel forces, Zaydi Shia known as known as Houthis. The Saudis have also said they seek implementation of UN Security Council Resolution 2216, which calls for an end to the fighting and the return of Hadi to authority in the capital, where he would preside over a conference to form a consensus on Yemen’s political future.

The problem the Saudis face is that those objectives are not achievable by bombing, and they are probably not achievable at all. Yemen has always been difficult to govern, and now it is effectively partitioned into areas controlled by the Houthis, by pro-government forces and by Al Qaeda’s Arabian Peninsula affiliate, known as AQAP. Even if the stalemate ended, it is unlikely that any government could establish uncontested authority over the entire country.

The Security Council demanded that the Houthis pull back from all the territory they have seized since the war began, including Sanaa, but they have refused to do that. On the contrary, they have been firing missiles across the border into Saudi Arabia, forcing the closure of some schools and airports. The Saudis and their Sunni Muslim partners regard the Houthis as agents of an Iranian proxy war against them, and therefore are unwilling to halt the war and let the Houthis consolidate their gains. As with the conflict in Syria, no participating country or group has been defeated, and therefore no one can impose terms.

In April, Jubeir said the priority in Yemen was no longer to wage a war against the Houthis, whom he described as “our neighbors,” but to fight AQAP, which has entrenched itself in southeastern Yemen. If that is the goal in Yemen, it has had few successes, and the bombing campaign does little to promote it, in part because it has destroyed equipment and facilities of the government’s army. As long ago as last September, an analysis issued by the American Enterprise Institute noted that the Yemeni military forces are “so degraded today that they will not be able to fight AQAP effectively once the current conflict ends.”

Adding to the policy confusion, when the Saudi defense minister, Prince Mohammed bin Salman, was in Washington in June, one of his closest advisers told guests at a dinner that the Saudi objective was not to restore Hadi’s government or fight Al Qaeda, but simply to prevent the emergence in Yemen of “another Libya”—a violent, ungoverned expanse where militias rule in different areas.

When Prince Mohammed, a son of King Salman, met with President Barack Obama during that visit, the White House said that “with regard to Yemen, the president welcomed Saudi Arabia’s commitment to concluding a political settlement of the conflict and of GCC support to address urgent humanitarian needs and rebuild the country.” But that was before UN-brokered peace negotiations in Kuwait failed; and the prospect of “rebuilding the country” now seems more remote than ever.

Even before the conflict started, Yemen was heavily dependent on Saudi Arabia for economic support and faced an acute shortage of water. The Saudis viewed with alarm the prospect of a neighboring country that could become either a failed state, sending many thousands of desperate people across the long, porous border or, perhaps worse, a stabilized, regrouping country closely allied with Iran, the kingdom’s archrival.

The Saudis were successful in persuading the other sheikhdoms of the Gulf Cooperation Council to endorse their position, and the UN Security Council embraced the GCC’s resolution as its own. That diplomatic success has had little effect on the ground in Yemen, however, because two of the principal combatants—the Houthis and Al Qaeda—are nonstate actors who do not consider themselves subject to UN requirements.

Meanwhile, according to a recent report by the International Institute for Strategic Studies, Saudi Arabia is spending $82 billion a year on defense, which is the third-largest defense budget in the world behind the United States and China and represents about 13 percent of GDP, a far greater share than the countries of NATO. With oil prices less than half what they were when the Yemen conflict began, the Saudis are feeling the pinch, sending unemployed construction workers back to their home countries, reducing some subsidies and even increasing visa fees.

There has been little sign so far of domestic dissent among the Saudi people about the devastation of Yemen. With the exception of those on the border, the Saudis have been insulated from it, and Saudi casualties have been light. As Bruce Riedel of the Brookings Institution wrote in Al-Monitor earlier this month, “The easiest choice for the kingdom is to muddle along and make no decision.” But sooner or later the Saudis will have to decide—whether to escalate the conflict, or resign themselves to a de facto partition that would leave a large swath of a neighboring country in the hands of their enemies.